I Say, Old Bean, Did British Prime Minister Do Sex Things To A Dead Pig? 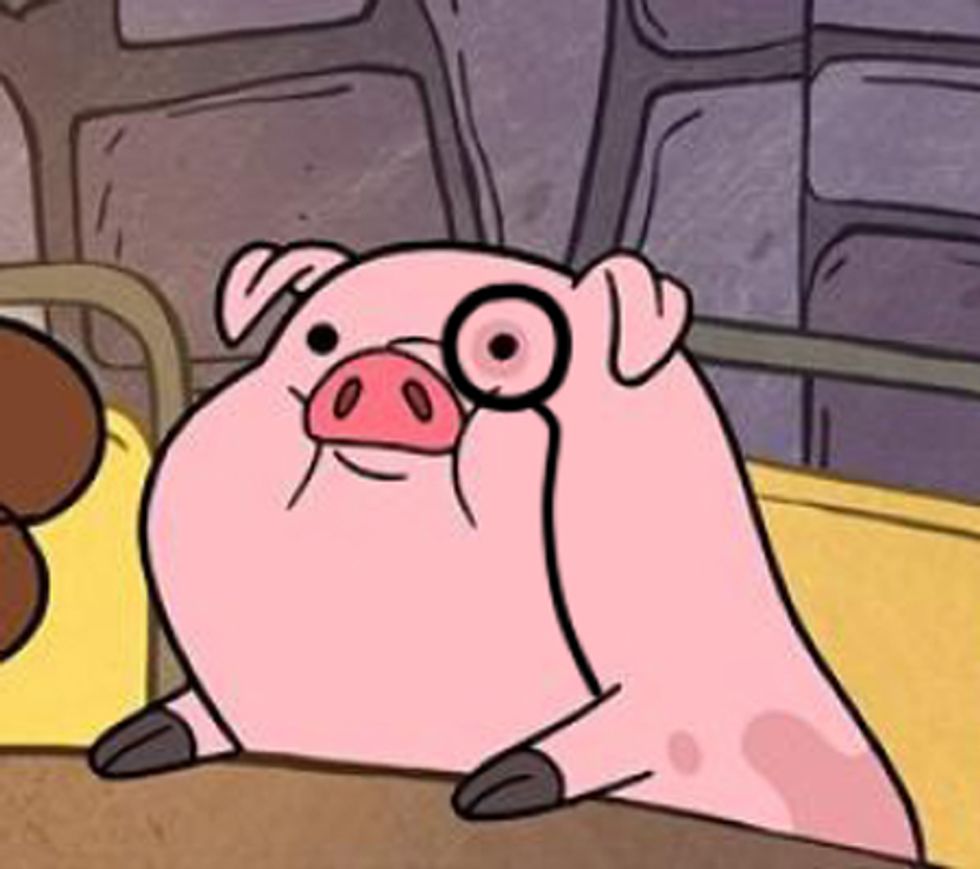 No, Waddles, don't read this!

There are a lot of weird dumb stories about American politicians and their bad behavior. But we're pretty sure that none is likely to top this alleged story about British Prime Minister David Cameron, who allegedly put his peener in a dead pig's mouth as part of a college initiation ritual. Has any American president even been accused of orally sodomizing a dead animal's head? It's moments like this that we really wish NBC's presidential historian Michael Bechsloss would return our calls.

According to a teaser for an unauthorized biography of Cameron (which ran in the Daily Mail, no less, so you know we're dealing with top-notch journalism here), David Cameron is said to have diddled the Lord of the Flies as part of a hazing ritual to join the "Piers Gaveston Society" at Oxford, a secret society "named after the lover of Edward II, which specialises in bizarre rituals and sexual excess." Here's the scoop, ever so delicately euphemized by unauthorized biographer Michael Ashcroft:

A distinguished Oxford contemporary claims Cameron once took part in an outrageous initiation ceremony at a Piers Gaveston event, involving a dead pig. His extraordinary suggestion is that the future PM inserted a private part of his anatomy into the animal’s mouth.

The source -- himself an MP -- first made the allegation out of the blue at a business dinner in June 2014. Lowering his voice, he claimed to have seen photographic evidence of this disgusting ritual.

My co-author Isabel Oakeshott and I initially assumed this was a joke. It was therefore a surprise when, some weeks later, the MP repeated the allegation.

Some months later, he repeated it a third time, providing a little more detail. The pig’s head, he claimed, had been resting on the lap of a Piers Gaveston society member while Cameron performed the act.

The MP also gave us the dimensions of the alleged photograph, and provided the name of the individual who he claims has it in his keeping.

The owner, however, has failed to respond to our approaches. Perhaps it is a case of mistaken identity. Yet it is an elaborate story for an otherwise credible figure to invent.

We have to say, we doubted the whole thing until we got to that bit about the "dimensions of the alleged photograph." That's the sort of thing a person just wouldn't make up.

Most of the article seems obsessed with "revealing" alleged drug use by Cameron -- marijuana, the Devil's weed! -- which we thought wasn't supposed to be especially shocking anymore, although there are also some extemely vague hints that if he'd wanted harder stuff, it would have been available to him, nudge-nudge, and we're apparently supposed to be titillated by the tale of a close relative who had a heroin addiction. But for godssake, the reputed pigfucking is the story here, isn't it? Lord knows we've had political animal fuckers in our dear land -- the serendipitously-named good old boy and failed gubernatorial candidate Neal Horsley from Georgia, who glibly recounted tales of adolescent mule-raping, and sitting U.S. Senator Thad Cochran, who reminisced during his 2014 campaign about the childhood joys of "all kinds of indecent things with animals.” And there have been other critter-diddlers in Congress, too, we're sure -- you can just tell. But no presidents as far as we know. Yes, yes, we know you're all thinking "LBJ," but if you give it just a little thought, you know that if he ever had done anything like that, he'd have been incapable of keeping quiet about it, possibly while hoisting a beagle by its ears. There's Nixon, of course, but he stuck to ratfucking in the traditional, not the literal sense.

So, how will the shocking tale of what the PM did with his Member of Parliament affect Anglo-American relations? We're assuming that it will all be politely left unmentioned since the claim is so over the top (over the top of what, eh?). Unless of course Donald Trump is elected. Then we can look forward to President Trump greeting Cameron, "Hi, Dave you old pigfucker!" and then insisting he meant something completely different, how dare you suggest otherwise?

[Daily Mail via The Daily Banter]