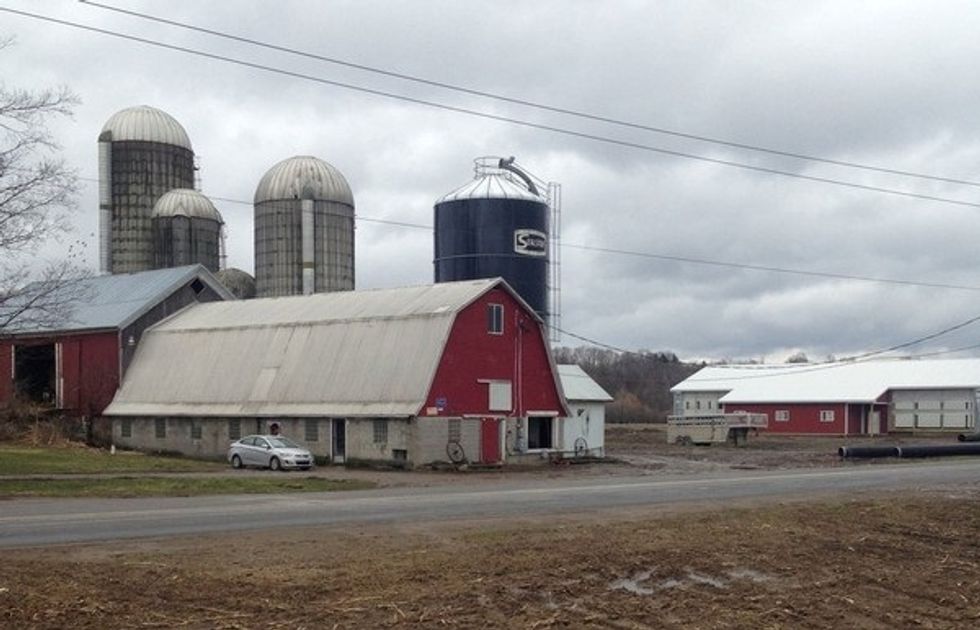 My, what a peaceful rural ... 'FREEZE, MOTHERFUCKER!'

Today's tale of ICE: Immigration Cops Gone Feral comes from Rome, New York, where dairy farmer John Collins is seriously pissed about the treatment a legal worker received at the hands of federal agents who seem to have decided that if the president doesn't need to bother with little things like "The Constitution," then neither do they. Collins told Syracuse.com that ICE agents entered his milk barn without a warrant or permission and seized one of his employees, Marcial de Leon Aguilar, whom they had pinned up against a window as Collins came into the barn after hearing the disturbance.

The men didn't have uniforms or visible badges or insignia, and their vehicles, parked across the road, had no law enforcement markings.

"I run and say, 'What the hell is going on in here?'" Collins said.

Then the men told Collins they were officers with Immigration and Customs Enforcement. He asked them for a warrant or some paperwork to explain what they were doing. They had none, he said, so he ordered them to get off his property and leave Aguilar alone.

Instead, the officers cuffed Aguilar and took him across the road to a vehicle while Aguilar's kids, who were waiting for the school bus, watched. He said the warrantless arrest involved seven officers and three vehicles.

Collins said he followed the officers cross the street and asked them why they were taking Aguilar, but he didn't get a straight answer. He also continued to ask for paperwork, but was not offered any by the ICE officers.

Aguilar, his wife, Virginia, and their four kids live in a house on Collins's farm; he says Aguilar has proper documentation to work in the US, and has been working at the farm for about nine months. Aguilar's wife and kids came from Guatemala and crossed the border illegally, and she has requested asylum in the US because of threats of violence against the family in Guatemala. While Syracuse.com didn't note what stage that asylum request is in, it seems safe to assume the initial interview found at least a credible claim that she was in danger, since otherwise, DHS policy is to deport people immediately. Note to trolls: That means these are not "illegal immigrants," no matter how many times you've read on Breitbart that asylum seekers are all just liars and Guatemala is a happy peaceful shithole country that people are leaving just to get on welfare and work at dairy farms.

Collins said that Virginia is in regular contact with ICE regarding her case, including a meeting just last week; she's pregnant with the couple's fifth child, and Mr. Aguilar has often accompanied her to meetings with ICE. She wasn't at the farm yesterday because of a doctor's visit, he said. Yes, yes, now let's hear all the crying about anchor babies, because Americans are the WORST.

Collins said that when he asked the officers again for a warrant, they ignored him; then when he took out his cell phone and began to record the arrest, one of the officers grabbed his phone and threw it across the road, then cuffed him and threatened to arrest him for interfering with federal agents. They are, after all, The Law, and don't see any need to show some dumb "warrant" to anyone.

US Senators Chuck Schumer and Kirsten Gillibrand are both aware of the apparently unlawful arrest; a spokesman for Schumer's office told the Utica Observer-Dispatch the senator was making inquiries to ICE about the incident, and Gillibrand responded to the Syracuse.com piece with a tweet calling for an "immediate investigation":

Deeply troubled by this report from Rome, NY. ICE officers should not be allowed to raid private property without a warrant. There must be an immediate investigation into what happened here. https://t.co/0eBEDAUQV8

US Rep Claudia Tenney's office also said she would be staying on top of developments in the case and would be a "liaison and resource" to the federal government for Mr. Collins.

Not surprisingly, the comments on the Syracuse.com story are full of Internet Detectives who just know there's something fishy about all this, the Aguilars are actually illegal and Collins has to be lying about Mr. Aguilar's work permit, and also no warrant is needed to arrest illegal immigrants since the Constitution is not for them anyway (not even remotely true, but you don't need facts on the internet). To be on the safe side, at least one said Collins should be stripped of his citizenship and deported to Guatemala with the Aguilars for harboring criminals, the way America is supposed to be. These would be the same folks who think universal background checks for firearms purchases would be the first step toward tyranny, and who no doubt think that Cliven Bundy and the Gang That Couldn't Think Straight should have shot some jackbooted federal thugs for enforcing land-use laws.

In other news, Fox News is still going on and on about how the FBI has no respect for due process, the end.

Yr Wonkette is fueled by reader donations and incandescent rage. Please click here so the former can be used to convert the latter into text.