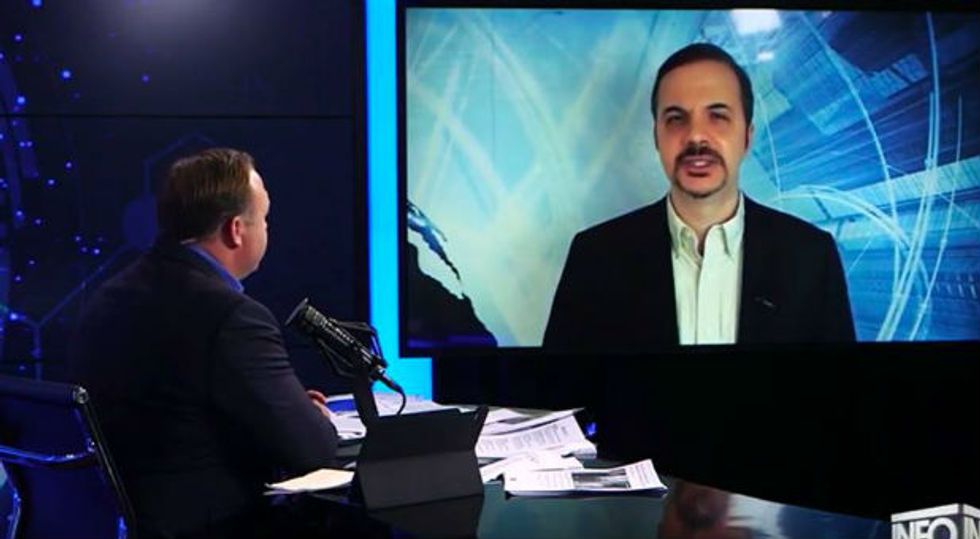 Yr Wonkette is a big fan of Idaho congressional candidate Michael Snyder, who's a prepper, End Times prophet, and (who'd have guessed) an anti-vaxxer who fears fluoride, too! No half-measures for this guy, which is why it only stands to reason that his vision of the future is Alex Jones screaming into a human face, forever.

Snyder explained on Jones's InfoWars internet show last week that the way to really fix America is to elect a whole Congress full of Alex Jones fans, to ensure liberty and trucker speed for all. All that's needed is a massive turnout of Alex Jones fans in Republican primaries, and the job of securing a permanent Trump-loving majority would mostly be done! It's really a keen insight into electoral politics: If you can get a majority of votes, you just might win!

Snyder, a regular guest on Jones's parade of Irregulars, whined that he's clearly a force to be reckoned with, since "leftists" have been attacking him, his wife, and his two-year-old daughter already. We're not sure what kind of "attacks" leftists would make against a two-year-old girl; perhaps someone said they felt bad she has Michael Snyder for a dad? (SEE HOW VICIOUS WE ARE????) Also, her taste in sippy cups is just terribly banal.

Snyder explained that he's running to "educate" people about the need to run InfoWars candidates all over the country, for every race, because while some might lose and others might not win, it's important to let the world know they're out there. And then when all the Alex Jones listeners vote as a bloc, surely Snyder and other Jonesians will be swept to victory! If like-minded advocates of liberty, the Constitution, and telling the truth about the chemicals that are making the damn frogs gay don't run, then "we’re going to get bad people into office." The main thing is getting up on that electoral stump and getting the truth out:

But a big part of running for office is educating people, because when you run for office, you get a platform. And whether you win or lose, you’re going to talk to thousands, if not ultimately millions of people for the bigger campaigns, and people are going to hear the message, people are going to get educated. So part of this is an education process of what we’re trying to do, get the truth out.

That actually makes a lot of sense, at least until you remember that the actual things Snyder believes don't make a lick of sense, like his amazing profile of a guy who died, went to heaven, had a chat with Jesus, and came back (Jesus is “not overly large, but he’s massively built. You would think that he’s a weightlifter, a body builder”). Snyder's wife, Meranda, also curates an ever-growing collection of prophetic dreams about tsunamis and asteroid strikes, because God is sending you messages while you sleep. Don't believe her? Just wait: There WILL be a tsunami in the future, and won't you feel foolish for doubting!

People don't understand, 'cause now the InfoWars audience has gotten so large and so powerful and had a huge impact for Trump [...] We could literally start taking over the Republican Party if we just get energized and motivated and galvanized to go vote.

Yes, Michael Snyder just explained to InfoWars viewers what a "majority" is. And ANY bunch of yahoos, no matter how small, can become an majority if only they turn out all the people who listen to their ideas! Of course, to register to vote, you have to give the government a lot of information. Information that lets them find you, like your address, and sometimes even your Social Security number! Has Michael Snyder really given a lot of thought to just how paranoid the average InfoWars viewer is?

He's probably a plant, a false flag agent who's infiltrated InfoWars to encourage people to enslave themselves by registering to vote. Beware.

Yr Wonkette is supported by reader donations. Please click the "Donate" clicky, as the funds the Lizard People give us keep disintegrating on contact with Earth's atmosphere.