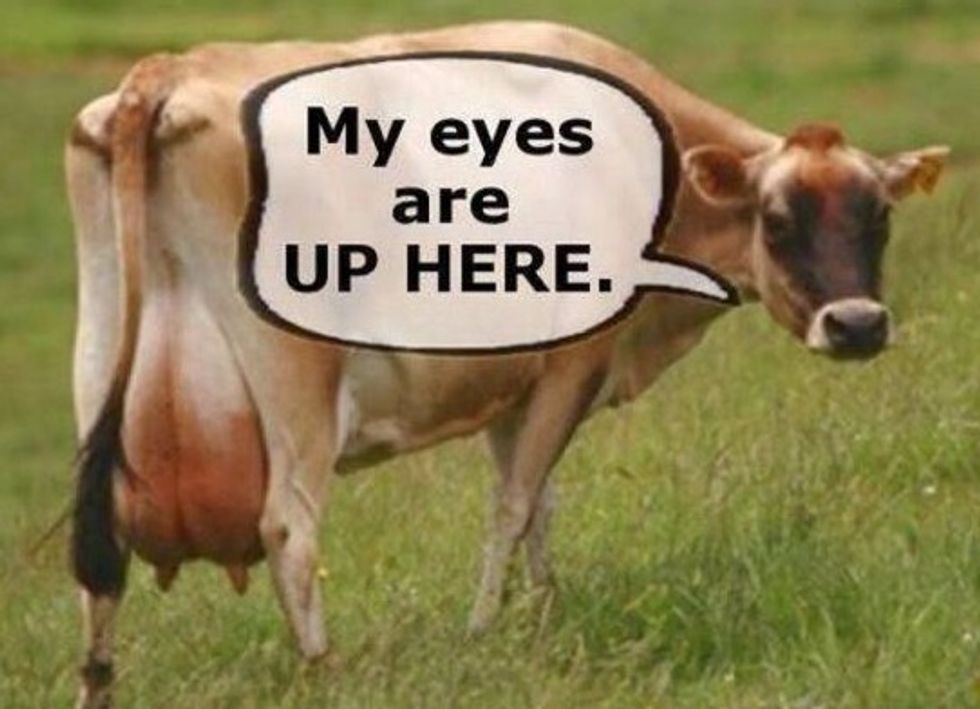 Thanks to theefforts of the Idaho Lege, Big Agriculture will soon be able to be able to beat up on animals as much as it wants or needs to without any pesky undercover animal rights dinguses covertly recording them. This is a big concern in ag-land, because for some reason, factory farms have gotten a bad reputation in some corners. But the Idaho Senate is on it, and passed a bill late last week that would smack activists with jail time and heavy fines for filming farm operations without permission. The so-called "ag gag" bill would carry a penalty of up to a year in jail and a $5000 fine, because everybody knows that an unhealthy interest in animal welfare is the first step down the road to eco-terrorism.

The bill was introduced after a 2012 incident in which members of animal rights group Mercy for Animals got jobs at a dairy and made undercover videos of cows being dragged. beaten, and jumped on; in response to the current proposal, the group released additional video this week, showing "a worker fondling a cow’s vagina."

This should be great news for people worried that Idaho only makes people think of potatoes, neo-Nazis, and Larry Craig. Now the state can be famous for cow rapists, too.

that no less than the state's food safety is at stake, invoking the specter of groups including al-Qaida sneaking onto Idaho farms and putting crops and other commodities at risk.

"We as a nation are at risk of losing a lot of our food to terrorism," Patrick said.

The bill would not only target people who lie on job applications, but also criminalize obtaining records of ag operations "by force or misrepresentation," which is apparently also pretty much like terrorism. Supporters of the law say that it won't limit whistle-blowers or free speech, because members of the public would still be able to complain to the Idaho Department of Agriculture, provided, of course, that they had some way of knowing about abuse in the first place. That's some catch.

Opponents of the bill, which passed the Senate 23-10 on Friday and now goes to the House, say that it's an attempt to stifle free speech; Republican state Sen. Curt McKenzie said that property owners were already protected by trespassing laws, and that the measure "may go beyond what we intend," while Democrats

The newly-released cow-sexing video did not come up in the debate, which is a shame for everyone; Yr Wonkette watched the vid (available at RawStory), and it does indeed show a worker briefly touching a cow's swimsuit area while making crude jokes. We're not sure it actually rises to the level of "sexual abuse"; it's more like what you'd call "barnyard humor" except that it's actually indoors and there's a living visual aid. Still, yick.

All we need now is for Texas District Attorney candidate Lloyd Oliver to weigh in and explain that some couples are just really into cow-punching, and is it anyone else's business?