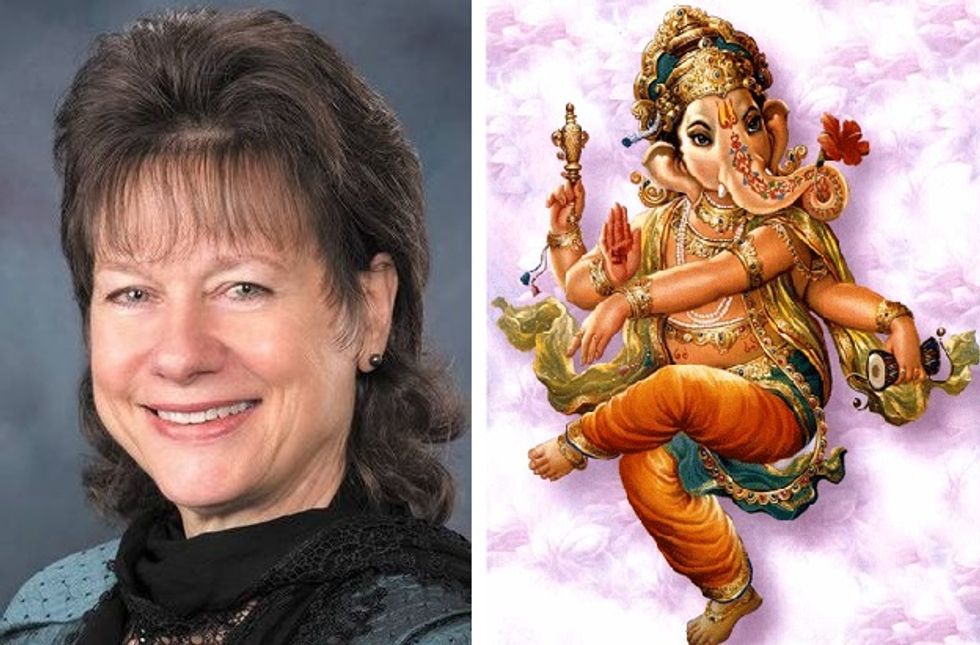 A couple weeks ago, there was quite the to-do in the Idaho Legislature when three state senators walked out on an invocation given by a Hindu clergyman (initial reports put the number at seven, but, it turns out three were just plain late showing up, while a fourth was also late, but was "disappointed" when he learned the prayer wasn't Christian). Since then, one of the three, state Sen. Sheryl Nuxoll, has continued to make waves on the JesusWeb for comments she made following the walkout, calling Hinduism a "false faith with false gods" and refusing to apologize. Nuxoll's brave resistance to the wave of Hinduism that's apparently taking over the Gem State even drew notice from the American Family Association, which carried a story about her on its OneNewsNow site Monday:

"I just feel like I can't apologize for something I believe in," she tells OneNewsNow. "I may not have been politically correct in my terminology, on one little sentence, but how can I apologize for what I believe in?"

The majority of constituent feedback has been positive, he says. [sic]

The AFA has not yet apologized for accidentally performing a gender reassignment surgery on Nuxoll in the space of a single paragraph.

If Sheryl Nuxoll sounds a bit familiar, it's probably because she's the charmer who in 2013 refused to apologize for saying that Obamacare was exactly like the Holocaust, only for private insurance companies, and who last year voiced her support of a House bill declaring all EPA regulations null and void in Idaho; she somehow suggested that the EPA was an enemy of American's veterans, too.

After some regional religious leaders called on Nuxoll to apologize, she did at least budge a little bit, saying that she'd misspoken slightly:

[Nuxoll] said she didn’t mean to say Hinduism was “false religion,” just that it’s based on “false gods.”

“I said it was a religion with false gods,” Nuxoll said. “I’m not going to give an apology.”

And then a day later, she repeated her refusal to apologize (we're starting to think she now starts the day by refusing to apologize, right after brushing her teeth), and added that she had a bunch of other problems with the heathen Hindoo as well, having heard more about those people from all the supportive email sent to her by constituents: "There was one from a lady who said she had lived with the Hindus. She said there was a great amount of infanticide and abortion.”

She added that she bore no animosity toward Rajan Zed, the cleric who gave the godless heathen invocation, and encouraged him to “be the best Hindu that he can for his faith and beliefs,” which is quite nice of her, considering he's bound for Hell.

Yes, Nuxoll, a woman tasked with making Idaho's laws, is very good at Constitution, as you can see.

Not everyone in Idaho is enamored with Sen. Nuxoll, however. On Sunday, the Spokane Spokesman-Review carried a letter from the senator's cousin, Joan Kopczynski (of the Spokane Kopczynskis), who said that Nuxoll's "rude actions and comments about the Hindu faith" were "worrisome, to put it mildly," and distancing herself from her more notorious cousin:

And since I and many others in the family don’t agree with Sheryl’s disrespectful and offensive views against the Hindus, her recent actions caused us embarrassment.

Kopczynski also regretted that Nuxoll's "bigoted beliefs" might harm Idaho, much as the state had gotten a reputation for intolerance after the Aryan Nations had established its headquarters in northern Idaho in the 1990s. Heck, no need to worry -- only the Chamber of Commerce types care about Idaho's reputation, and they're all in Godless Boise, which is full of Unitarians and lesbians anyway.