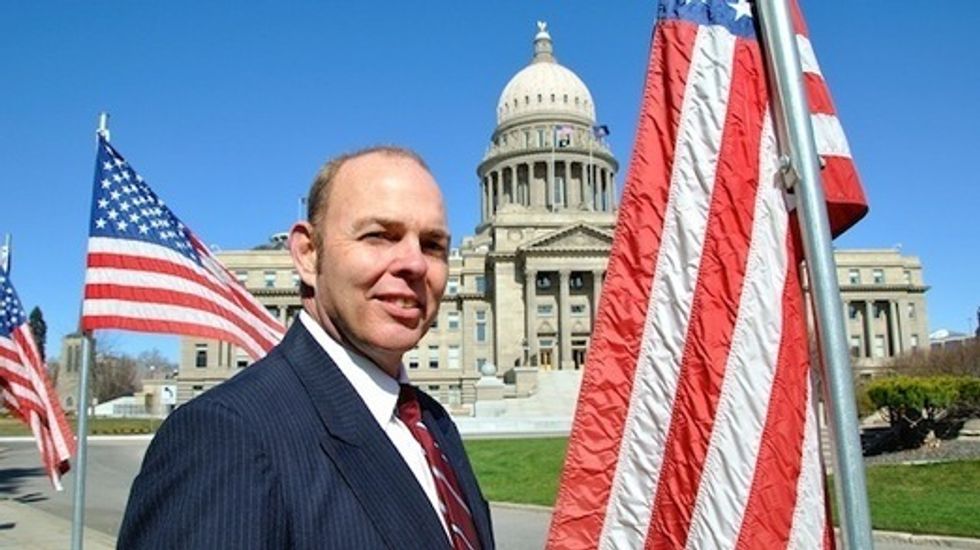 In a rare instance of a teabagger recognizing reality, Idaho state Rep. Mark Patterson announced Wednesday thathe will resign from the state legislature by the end of the week. Patterson, you'll recall (no need, now, haw haw!) was the guy who covered up a 1974 guilty plea in a rape case, an inconvenient detail that he left off his application for a concealed weapon permit. Patterson then accused Ada County Sheriff Gary Raney of revoking the permit because Raney didn't love the 2nd Amendment enough, and as revenge for a stupid bill Patterson had sponsored that would have punished law enforcement officers who enforced any hypothetical federal gun bans. And then we all had a good laugh, because it turns out that under Idaho law, all state legislators are entitled to carry concealed weapons without a permit anyway, because in Idaho, we love our goddamn guns.

In keeping with Idaho law and tradition, the remainder of Patterson's term will be served out by his gun.

Patterson announced he would resign after the Republican precinct committee for his district unanimously called for him to step down Tuesday.

"I do agree with the motion that was passed in regards to the fact that, in this current climate I can see where a lack of confidence to serve would be in question," Patterson wrote in an email. "The citizens of District 15 and Idaho need lawmakers who have their full ability to represent the people."

Patterson's resignation will bring to an end one of the stranger political stories out of Yr Doktor Zoom's home state, which, considering we've had Larry "wide stance" Craig and those Aryan Nations loons back in the 90s, is saying something. Don't worry, we'll find more -- we're not about to give up our title of Florida in the Pacific Northwest anytime soon.

To review, Patterson pleaded guilty in 1974 to “assault with intent to commit rape” in a Tampa, Florida case as part of a plea deal after he was accused of threatening to sic a Doberman pinscher on a 46-year-old woman if she wouldn't have sex with her. You know, just one of those mistakes that 21-year-old guys make. Patterson later claimed that he was innocent all along and that the woman had accused him of rape because he wouldn't give her money, but he accepted a withheld judgment in the case because while it did involve pleading guilty, he thought it would get the charge expunged from his record. Which it didn't. and also, he says that he didn't recall the details of the assault anyway, because he got a hepatitis infection at the dentist, also, too. It was a long time ago, OK, and he just wants a gun to protect himself in the dangerous halls of the Idaho Capitol.

So far, no official word on what will happen to Patterson's precious gun, although we assume that once he's no longer in the lege, he'll lose that special "Everybody gets a concealed weapon" privilege, and while he's appealing the denial of his concealed carry permit, we're guessing that's not going to get very far either (then again, it is godforsaken Idaho). This could mean that Patterson may have no other option but to walk around with his Precious in a belt holster like some commoner, since Idaho does, of course, allow open carry.

As of press time, we have no information on whether Patterson intends to take up "painting."