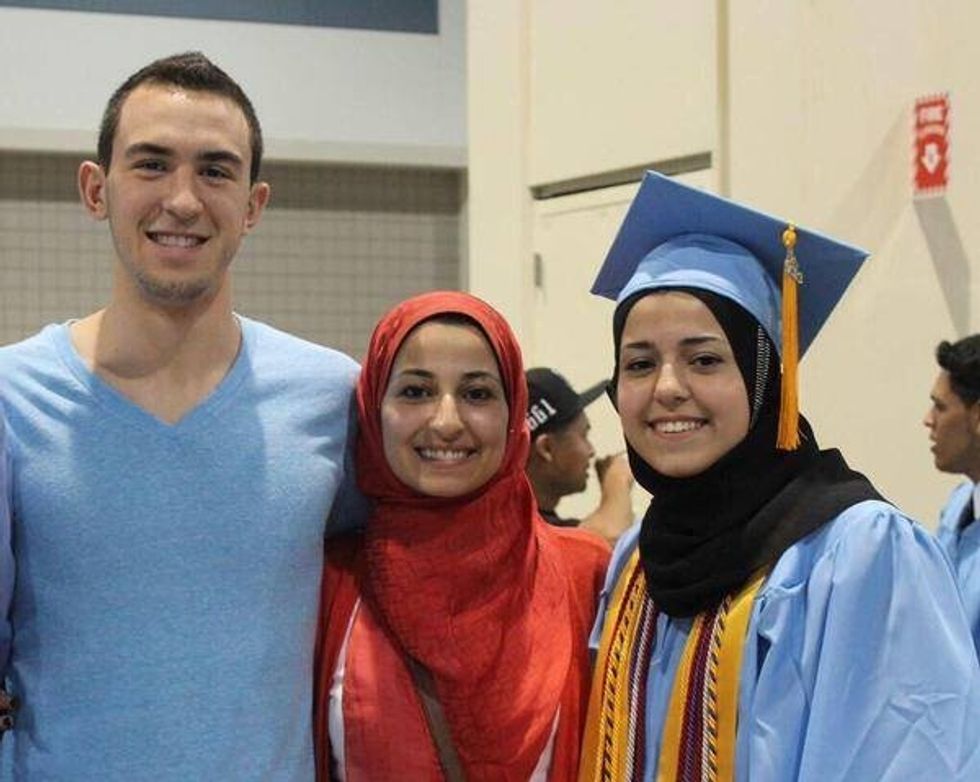 Congratulations, America, we have a whole new terrible murder to turn into a debating point in the Culture Wars! And just to mix things up a bit, the victims were three Muslim students (all of them apparently smart over-achievers who should have had beautiful lives ahead of them), and the accused killer is described variously as an "atheist," a "radical atheist," or a "crazed progressive atheist."

Police in Chapel Hill, North Carolina, have issued a statement saying their "preliminary investigation indicates that the crime was motivated by an ongoing neighbor dispute over parking," but that's pretty boring, so get ready for the murders of Deah Shaddy Barakat, 23, his wife, Yusor Abu-Salha, 21, and her sister, Razan Mohammad Abu-Salha, 19 to become the focal point for some confused combination of atheist-bashing, Islamophobia, and of course attacks on the Liberal Media, which the Daily Caller is accusing of "ignoring" the killer's liberal politics.

What's known so far is that Craig Stephen Hicks, 46, shot the three at the condominium complex where they all rented, then almost immediately turned himself into police and is cooperating with them. Because the victims were Muslims, the police are also investigating the killings as a possible hate crime.

The story spread quickly on social media, with many Muslims claiming that the story was being under-reported because of the victims' faith. The Independent, on the other hand, highlighted Hicks' online posts mocking all religions and describing himself as an "anti-theist." His Facebook page is being scrutinized for evidence of why he killed three people. The Daily Caller and rightwing blog the PJ Tatler are making much of the fact that while major media sources have noted Hicks's atheism, virtually none have called attention to his politics, which proves something terrible about the liberal media. The Tatler observes:

A review of the Facebook page of the man charged in these murders, Craig Hicks, shows a consistent theme of anti-religion and progressive causes. Included in his many Facebook “likes” are the Huffington Post, Rachel Maddow, the Southern Poverty Law Center, Freedom from Religion Foundation, Bill Nye “The Science Guy,” Neil deGrasse Tyson, gay marriage groups, and a host of anti-conservative/Tea Party pages.

Remarkably, one of the four Facebook groups he had joined was “Religious Tolerance.”

Yep, he was very definitely an atheist. Better start rounding them up. And maybe fans of Gibson guitars, which Hicks also liked. Honestly, we're inclined to think the shootings' more probable motive may have something to do with Hicks being an asshole with a gun.

The Independent notes that Richard Dawkins (also "liked" by Hicks) condemned the murders on Twitter: "How could any decent person NOT condemn the vile murder of three young US Muslims in Chapel Hill?”

The three victims all sound like they were pretty terrific young people. Deah Barakat was a dental student at UNC-Chapel Hill's School of dentistry; he and Yusor Abu-Salha had just gotten married a month ago. She would have graduated from North Carolina State this coming December. Her sister Razan was also a student at NCSU. Both Abu-Salha sisters had graduated from high school in Raleigh. Barakat had been planning to travel this summer to Turkey with 10 other dentists for a project to provide free dental care to Syrian refugees. Since his murder, an online fundraiser that he had set up for the effort has already more than doubled its goal.

So get ready for a nice big culture war over how atheists, with no moral absolutes, are prone to violence, and progressives, who preach tolerance, murder Muslims. The one thing we definitely won't be talking about is how easy it is for a deranged person of any political persuasion to get his hands on a firearm. Also, will the Arkansas gun range lady start banning atheists?