If Nashville Mayor Megan Barry Should Stay, She Would Only Be In Your Way ... 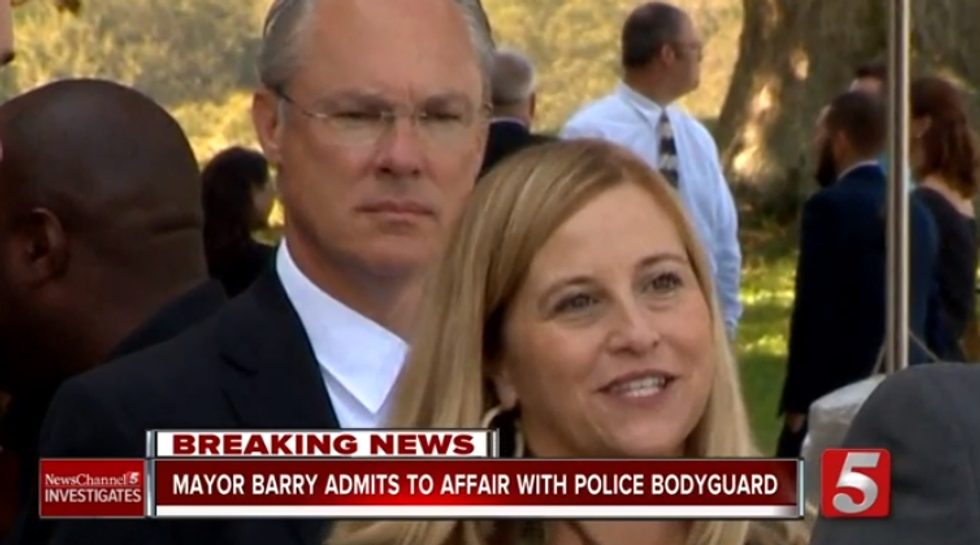 Bad news for all mayors who have that one special bodyguard what is not their husband, the one they take on romantic official mayoral trips to France on the taxpayer dime, who clocks a bunch of overtime because his cock is working overtime. Megan Barry, the progressive mayor of Nashville and also the mayor of boning on the public dime, has resigned from office. She also has pleaded guilty to felony theft over $10K. She will have to pay the city back $11K moneys, and also her ex-lover/bodyguard Sgt. Robert Forrest will have to pay back $45K, as punishment for Improper Use Of Night Stick (Penis). Or something like that, we are not here to delve into the finer points of Tennessee state law.

"While my time of mayor today concludes, my unwavering love and sincere affection for this wonderful city and its great people will never come to an end," said Barry, who was was subdued throughout her short remarks. "No one is as excited about this city and its bright and limitless future as I am.

"It has been my honor and it has been the privilege of my entire professional life to have the blessing and the opportunity to be your mayor," she continued. "I thank you in advance for the support that I am sure you will give Mayor Briley in the weeks and the months ahead. God bless this wonderful city. I love you, Nashville."

"If I should stay I would only be in your way-ayayayayayayay.

We both know. I'm not what. You nee-eeeeeeeee-eeeeed!"

You get our headline now??? Because Megan Barry was bumpin' pelvics with her BODYGUARD and Whitney Houston (PBUH) sang that song for the movie film The Bodyguard! It is even a more meta headline than usual, because Dolly Parton wrote that song, and until today, Megan Barry was the mayor of Dolly Parton, at least when Dolly Parton is at her Nashville house!

Pffffft, we do not need to explain these things, as we are the mayor of headlines.

Moral of story: Boning on the public dime is a bad plan, especially when it is a very big stack of public dimes, because that is bound to leave a really weird dime-shaped mark all over your pubic bits, and also you might have to quit being mayor because of it, THE END.