If The Confederate Flag Is OK With Yankee Businessmen, It's OK With Nikki Haley 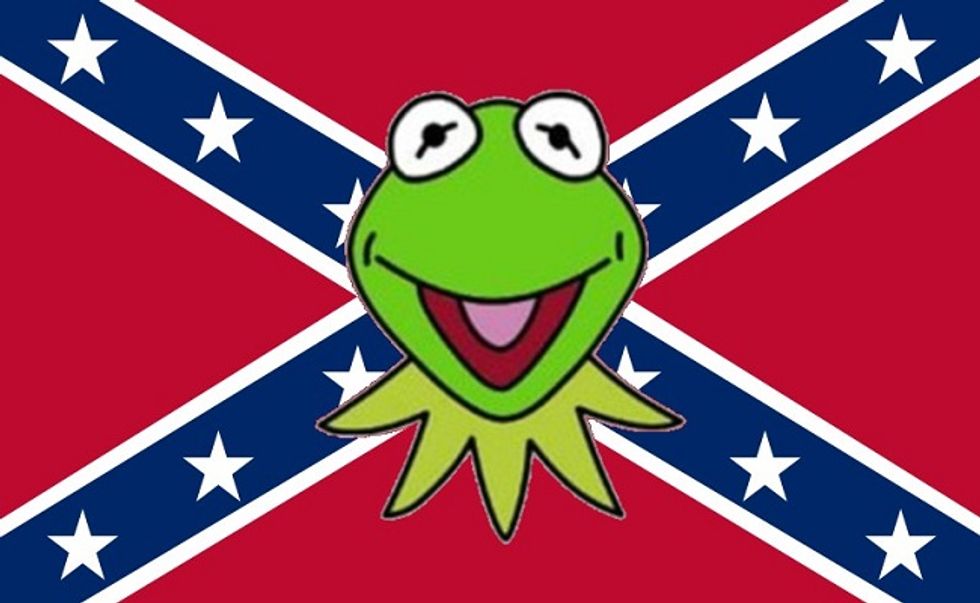 Sweet Siddhartha of Myrtle Beach, did someone crack open the skull of Gov. Nikki Haley (R-Of Course) of South Carolina, scoop out her brain, and replace it with a lump of guacamole? Sure, she governs a state populated by rancid goobers who have an unholy attachment to the Confederate flag, and she wants to keep them happy without reminding them they are celebrating a long-dead nation that got stomped like an anthill in the path of a marauding band of five-year-old Ritalin junkies. Still, if the question is “Should the state of South Carolina continue flying this flag on the lawn of its statehouse?” surely Gov. Haley can come up with a better answer than “Eh, CEOs of out-of-state businesses don’t seem to mind it.”

Yet that is what she said during the South Carolina gubernatorial debate earlier this week. Asked to respond to a recent call by her opponent, Democratic state Sen. Vincent Sheheen, to “retire the flag to a museum” and “rally together under a flag that unites us all, the American flag,” Haley gibbered,

What I can tell you is over the last three and a half years, I spent a lot of my days on the phones with CEOs and recruiting jobs to this state. I can honestly say I have not had one conversation with a single CEO about the Confederate flag.

Businessmen outside South Carolina don’t care about the Confederate flag as long as you grant them shitloads of tax breaks to move their businesses to the state? What a remarkable insight. And how is that working out for the Palmetto State?

Well, the United States Commerce Department recently ranked South Carolina’s 2013 economic growth 35th out of fifty states. The state’s unemployment rate for this past July and August rose while the national rate fell. Half the 57,000 “announced” jobs that Haley claims to have created in her three and a half years in the governor’s mansion don’t actually exist because that number “includes businesses that never opened, or opened and then closed.” Nearly 8 percent of those jobs are in Wal-Marts, and we all know what great employers those jackholes are.

Haley also takes pride in having moved over 20,000 people off the welfare rolls into the workforce, but fails to mention that the average wage those people are earning is $9 an hour. Which means a yearly income of $18,720. In fact, the Census Bureau ranks South Carolina 44th out of 50 states for median household income.

One could also argue that there are moral reasons (to put it mildly) for a state to stop displaying the Confederate flag, which would probably leave Haley staring slack-jawed and drooling for a minute before she responds, as she did in the debate:

We really kind of fixed all that when you elected the first Indian-American female governor. When we appointed the first African-American U.S. senator, that sent a huge message.

Hooray, racism is over because Nikki Haley got elected governor and she then appointed Tim Scott to finish Jim DeMint’s term in the Senate!

We get it though, Governor. It’s tough to talk about something icky like racism. Distracts from your work rocketing South Carolina’s economy up from 35th to 34th in 2014. (Fingers crossed!) Lucky for you that Vincent Sheheen has been running a lousy campaign, and you’re likely going to easily win re-election. Maybe next term you can do something about that flag.