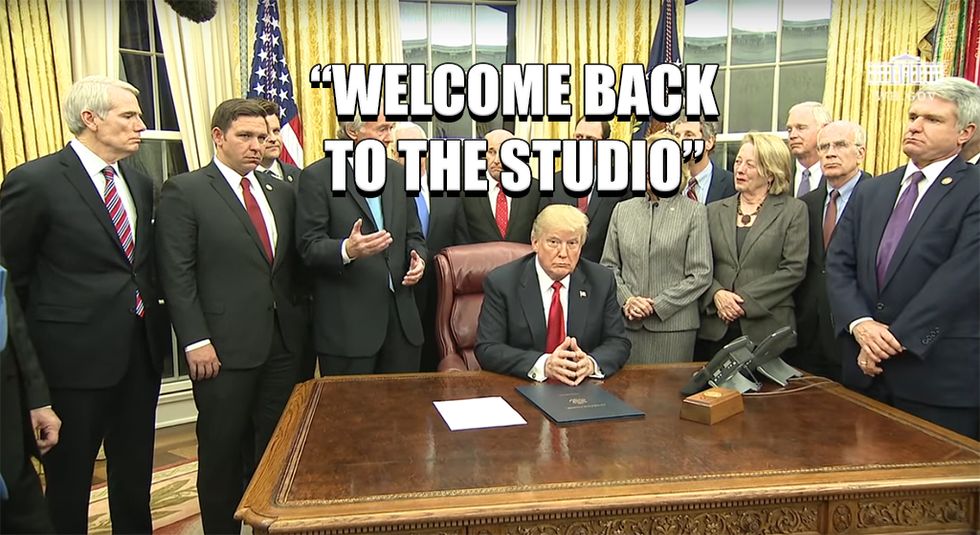 Missouri's godawful governor Eric Greitens has admitted to an extramarital affair back in 2015, but he SWEARS he didn't try to blackmail his mistress into shutting the fuck up by taking her into his basement, blindfolding her, then tying her to exercise equipment and taking naked photos of her.

During a presser with Norwegian Prime Minister Erna Solberg yesterday, President Trump repeatedly dodged questions about whether or not he'd sit down for a nice little chat with Robert Mueller and his justice league of extraordinary investigators.

IF Trump actually sits down to chat with Robert Mueller, he's probably going to have some serious meat sweats.

Robert Mueller has brought on an expert cyber crimes prosecutor who nabbed the original Guccifer back in 2014, with observers wondering if Mueller is potentially bringing charges under the Computer Fraud and Abuse Act. [Morning Maddow]

Somebody leaked the secret plan to kill Obamacare and win over House Freedom Crazies by using executive actions to systematically cut the legs out from under the ACA.

States will soon be allowed to force Medicaid recipients get jobs thanks to a new policy from the Trump administration that Centers for Medicare and Medicaid Services admin Seema Verma calls an effort to help people achieve "self-sufficiency."

The rumor mill on the Hill is that Republicans are going to bail on a budget after realizing that they don't have enough votes to keep all the different hawks from flying off the rails.

Trump has suggested that Congress should rethink the ban on earmarks that were once used to grease the palms of skittish congress critters. Maybe Trump just wants the Bridge to Nowhere to lead to Russia?

About 100 7-Eleven stores across 17 states and DC suddenly became victims of a pre-dawn ICE "audit," with one official calling it "a harbinger of what's to come."

The Trump administration is continuing to drag its feet on the opioid crisis as deadline for the 90-day public health emergency runs out.

UN officials are gossiping that Nikki Haley's bombastic hardline speeches aren't intended to keep Trump from throwing a tantrum, but that Haley is quietly building a base for a presidential run.

A new report from the IRS details how the agency has spent $20 million hiring private debt collectors to recover $6.7 million from poors who couldn't pay their taxes to Uncle Sam.

Democrats are planning to protest Trump's first State of the Union address later this month by either wearing black, or simply skipping another nationally televised display of "American carnage."

The trafficking of firearms may soon become a lot easier if Trump's White House transfers licensing of gun exports from the State Department to the Commerce Department.

Interior Secretary and grifty bastard Ryan Zinke is reorganizing the Department of the Interior, shifting staff, centralizing authority, and redrawing boundaries based on geographic basins rather than states, but the whole plan still needs congressional approval.

A video depicting a US soldier appearing to commit a drive-by shooting on Afghan civilians has spawned a military investigation of spec-ops soldiers. One veteran who viewed the video noted, "It may have been an operator not doing the right thing and firing a non-lethal round just to be a dick."

The DC City Council unanimously voted for the Boris Nemtsov Plaza Designation Act which renames the part of Wisconsin Ave. in front of the Russian Embassy to honor the Putin critic who was assassinated outside the Kremlin in February of 2015.

A bunch of sheriffs in Alabama are trying to hide how much money they spend on food for prisoners since there's a law that says they can pocket the leftover cash, leading to allegations of abuse.

The woman who created the Shitty Men in Media list outed herself in a tweet instead of letting Harper's dox her. Last night, she published a lengthy essay detailing WHY she made the list.

Fox News reporter James Rosen and WaPo's Joel Achenbach have been accused of sexual misconduct. Rosen has left Fox while Achenbach is on a 90-day suspension without pay.

US ambassador to the Netherlands Pete Hoekstra held his first press conference, and it was dominated by the Dutch press trolling him with questions about "no-go zones" and "politicians that are being burned." When Hoekstra refused to respond, one reporter stated, “This is the Netherlands, you have to answer questions.”

Ex-UKIP leader and Brexit fetishist Nigel Farage is now suggesting that maybe there should be another vote on Brexit since everyone is "whinging and whining and moaning all the way through this process." What a cheeky bastard.

Your crazy drunk uncle can take off his tinfoil hat now that science geeks have discovered last year's creepy space pulses were likely from a collapsing neutron star. Of course, that's what THEY want us to think...

The people of Rome can't wait to turn their godawful $57,000 Christmas tree into a lactation hut, and some cheap souvenirs.

And here's your late night wrap-up! Stephen Colbertwished Trump good luck at changing libel laws; Jimmy Kimmel noticed Trump told his 2,000th lie; Seth Meyers had another late night press briefing; The Daily Show talked about Trump's mixed messages on immigration; Jordan Klepperlearned how to write like the "alt-right"; and Samantha Beerailed against everyone for falling for Fire & Fury

And here's your morning Nice Time! A grey seal pup!

We're only ad-free because people give us money. So do that! (PLEASE)<3