In Case You Forgot, Rick Santorum Has Important Thoughts About Freedom 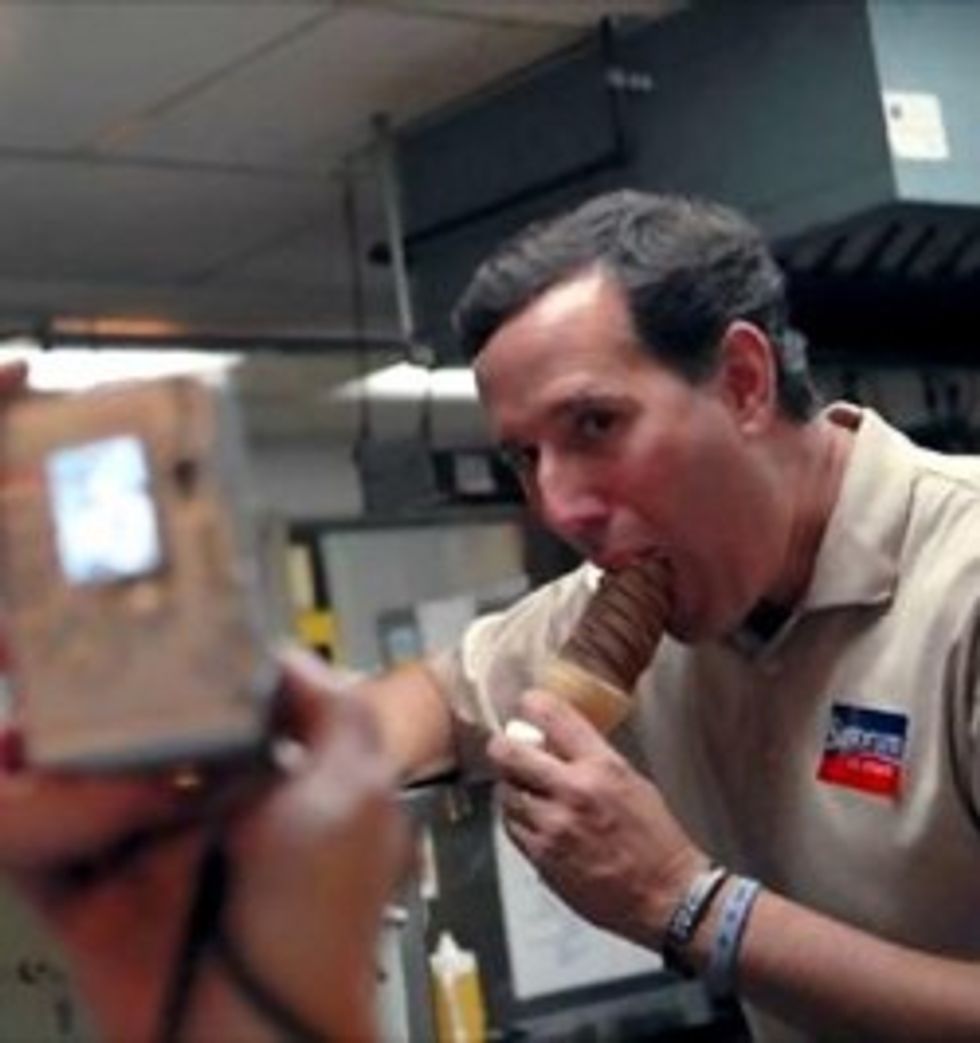 Discarded philosopher-statesman Rick Santorum’slatest column at World Net Daily is about Freedom and the taking of it by Barack Obama. Naturally, it’s a veritable Journey concert of brain-dead paleo-conservative greatest hits: We are Free Americans because our values are having guns, being hetero-sexing Christians, drowning Obamacare in the sink, and Taxed Enough Already! Yes, all of this stopped being terribly funny a while ago, but here’s the thing: Rick Santorum’s rote regurgitations distill a certain dangerous strain of American political “thought” that remains influential. Hell, they might even influence how people think and talk about politics, so what choice does yr Wonkette have but to think up new ways to eviscerate the simpleton “philosophies” that underpin them? We will do it real good, we promise. PLUS: Rick Santorum invents a new form of punctuation!

First, let’s just ignore Rick’s “religious liberty” and “gun rights” bullshit because (we think) we’ve finally arrived at a point where the folks who parrot these kinds of arguments are getting the “smile, nod, back away from” treatment from anyone with a mind worth engaging. Our work is done here!

Sadly, the “economic freedom” slice of Santorum et al’s medicine show remains as potently popular as it is totally fucking wrong. We’d love to ask Rick Santorum if a kid raised by an unemployed single mother in a dying, meth-addled Appalachian coal town is as economically free as Rick Santorum’s kids who sucked the money-teat of power. Of course he would say “Yes! Because America and low taxes, he can be Rick Santorum too!” Hey family that can’t afford college, food or medicine, at least you’re free! Hey, guy without feet, at least you have legs! This is Rick Santorum’s Best Of All Possible Worlds, we’re just suffering in it. Or maybe it would be even better if we helped you people even less, because “waste.”

We’d also love to ask Rick Santorum about this:

“Intergenerational [economic] mobility in the United States is lower than in France, Germany, Sweden, Canada, Finland, Norway and Denmark. Among high-income countries for which comparable estimates are available, only the United Kingdom had a lower rate of mobility than the United States.”

What would be his answer? After all, the countries where it’s easier to go from rags to riches all have higher taxes, spend more on citizens’ health and welfare, and are less religious than the United States. That’s every arrow in the Santorum quiver, except homosex! Of course, maybe he'd just say that money doesn't equal freedom, unless you do the alchemy that turns money into speech first. Curse your ironclad logic, Rick!

Here’s something you can tell idiots like Rick Santorum who love the “we don’t need welfare, we need freedom” argument: Maybe that was a good point a hundred years ago, when rather than issue food stamps the federal government could just give you literally hundreds of acres of FREE FUCKING LAND if you only promised to go live there and maybe try and grow something. But that’s over now, and tough luck if you didn’t get any. Maybe it was a good point sixty years ago, when the United States was the only industrial economy not bombed to rubble in the biggest war in history and any white man could get a job. That’s over, too. Not to get too philosophical, but with vanishingly few exceptions there’s no way to live without money anymore, and by this fact alone, you have to concede that every living American is constrained from birth in ways they didn’t vote for and can’t change. Going one step further and saying “OH YEAH and also nobody’s gonna help you if mommy and daddy can’t” is not only cruel, it’s philosophically incoherent.

Finally, as promised, Rick Santorum’s errata: He sort-of quotes the preamble to the Declaration of Independence: “We hold these truths [– truths –] to be self-evident” … maybe the weird bracketed em-dashes are because he just copy-pasted that part from one of his shitty speeches and that’s how he remembers to say the word “truths” really “passionately?” Continuing with the theme of not being good at quoting stuff that everyone already knows, Rick Santorum also reminds us about that time when Barack Obama said people are “clinging to their guns and Bible” (quotes in original) when Obama actually said “religion," not “Bible," because he’s a Moslem. We would hate to see Rich Santorum's version of a Jimmy Buffett song! Also fun to read was Rick’s sic take on the French Revolution:

“The revolutionaries’ guiding words were equality (sounds goods), liberty (good) and fraternity or brotherhood – not paternity, fatherhood. That is, in France, the belief was not that rights come from a Creator. Instead, the other revolution was a secular, godless, anti-clerical revolution. Churches were burned; clergy were killed. It was a rejection of God.”

Sounds goods to us, too, Ricks! Keeps ups the greats works!