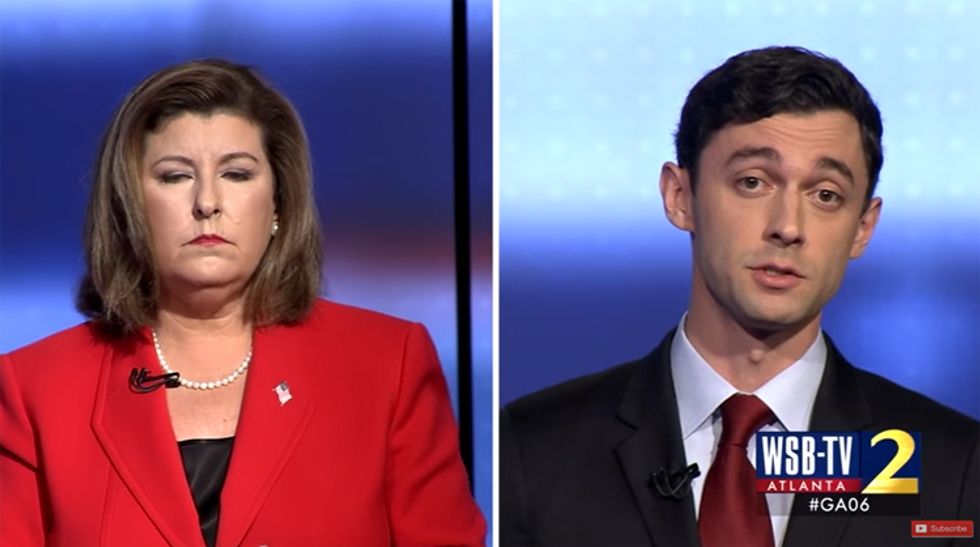 The flag lapel pin might not make up for the gaffe.

As Michael Dukakis proved with his wooden answer to Bernard Shaw's very notorious first question in the 1988 presidential debate, sometimes having the right talking points for your party is a really crappy way to connect with voters. Shaw asked if Dukakis would want the death penalty for some hypothetical criminal who raped and murdered Kitty Dukakis, and without the least bit of hesitation, Dukakis launched into a list of reasons why he opposed capital punishment. Sure it was an unfair, emotionally loaded question, but Dukakis should have at least acknowledged the emotional weight of the desire for revenge before explaining why the death penalty is terrible. It's TV debating 101.

Karen Handel, the Republican running against Jon Ossoff in this month's special election for Georgia's 6th congressional district, apparently never learned it's not always good strategy to go with a bald declaration of your party's position on some issues. Luckily for Ossoff, the Republican position on the minimum wage is terrible, and with two weeks to go before the run-off election, Handel sounded terrible pushing the standard Republican line:

This is an example of the fundamental difference between a liberal and a conservative: I do not support a livable wage. What I support is making sure that we have an economy that is robust with low taxes and less regulation, so that those small businesses that would be dramatically hurt if you imposed higher minimum wages on them are able to do what they do best: grow jobs and create good paying jobs for the people of the 6th District.

If they would rather die, they had better do it, and decrease the surplus population.

All of it perfectly in line with Republican orthodoxy on minimum wage, and a fine example of why most people can't stand Republican orthodoxy on the minimum wage. Maybe she could have added that people who make minimum wage aren't worth wasting health care on, since their skills don't contribute anything useful to the economy. Not that we wish she'd answered the question with any more finesse, of course. But hey, she mentioned small businesses and prosperity, so that ought to count for something, maybe? Wanting people to support themselves on their income is the fundamental difference between liberals and conservatives? Terrific, what's the conservative upside of people not earning a livable wage?

Ossoff's campaign was quick to capitalize on Handel's infelicitous phrasing of the glories of the free market:

Ossoff and Handel also got into it on the Republican healthcare agenda, with Handel rambling a bit, repeating the debunked claim that the marketplace is collapsing (though Crom knows Rs are trying to stab it in the neck), and insisting she didn't accept the Congressional Budget Office's estimate that the House GOP plan would leave 23 million people uninsured.

Handel just plain lied about the CBO estimate, saying it assumes nobody would "take credit of the tax credits" that would replace the ACA's subsidies for private insurance. That's simply not so -- the CBO said the tax credits would be an inadequate substitute, and would leave most people paying more for insurance.

Ossoff countered that Handel and Republicans want to "impose their values" on other Americans through the part of the AHCA that guts federal aid to Planned Parenthood, just like Handel did when she ran the Susan G. Komen Foundation. Seemed weird, Ossoff said, that the head of an organization dedicated to fighting breast cancer would try to cut off funding for Planned Parenthood to do breast cancer screenings.

Kill it! Kill it with fire!

Devotion to terrible ideas is a preexisting condition for most House Republicans.

Handel got angry at that one, saying that her sister had a preexisting condition -- she was born without an esophagus -- and for Ossoff "to suggest that I would do anything that would negatively affect her is absolutely outrageous and unacceptable." See, that's how you bring your family into a debate -- pity that the AHCA, will be murder on preexisting conditions. Handel made it worse by insisting the bill "provides more protection for individuals with preexisting conditions," which simply isn't true. As for the Komen Foundation, Handel insisted she's all for women's health, as long women's health isn't happening at Planned Parenthood: "I will not be lectured by you or anyone else,” she said. As for the cutoff in Planned Parenthood funding Handel is documented to have engineered before she was ousted from Komen, Handel lamely replied, "You can’t believe everything you read in the press. Everyone knows that."

Oh, also, Handel invoked the name of the Devil Incarnate repeatedly, linking Ossoff to Nancy Pelosi ten times during the debate and saying to Ossoff, "Your values are more than 3,000 miles away in San Francisco," a line from one of her ads. So there! Not sure what Handel has against bridges and cable cars.

Yr Wonkette would love it if you'd support us by clicking the "Donate" clicky below. And maybe you could help Jon Ossoff with his final push by sending some of your filthy Ameros to his campaign, too!