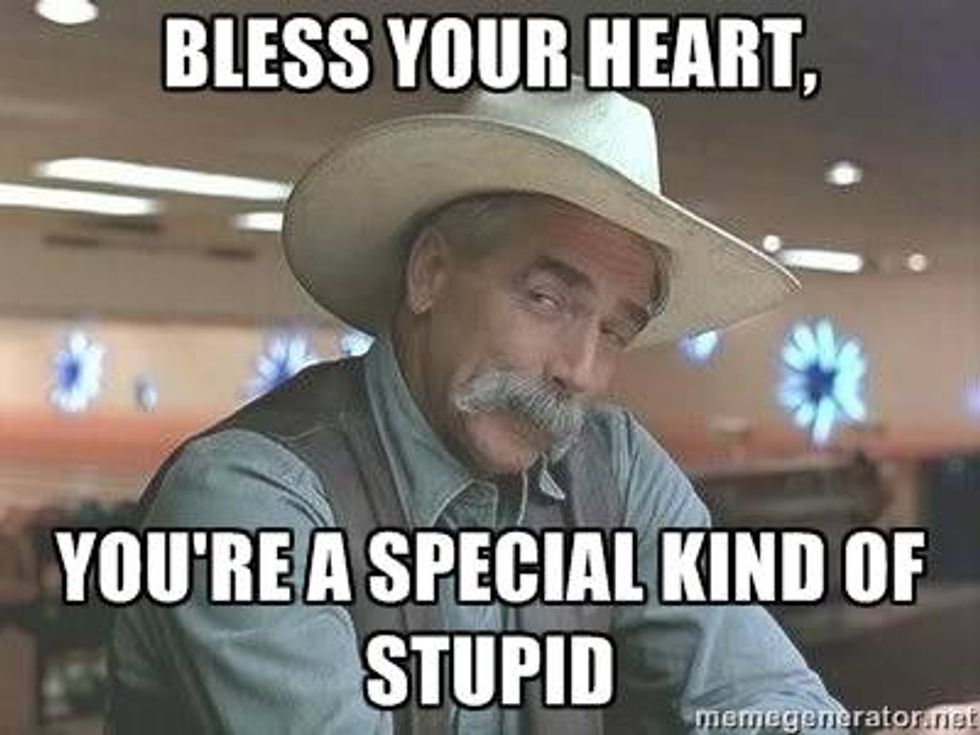 They can't help it.

There is a town called OXFORD, Alabama, and it sounds like the town council/shootin' range/squirrel recipe dispensary needs an OXFORD English Dictionary, because boy howdy, let us tell you about these dumb motherfuckers. The City Council is so mad about how Target says it's OK for transgenders to whiz, poop and otherwise adjust their business in whatever bathrooms feel the most comfortable for them, so they got together to pass a UNANIMOUS ordinance about it:

The new law, approved unanimously by the council’s members, restricts a person’s use of public bathrooms and changing rooms to the facilities designated for use by those of the gender listed on his or her birth certificate. The law applies within both the city’s limits and police jurisdiction. [...]

Under the new law, alleged violations must be reported by a witness or committed in front of a police officer to be prosecutable.

Those found to have violated the law would be fined $500, or sentenced to six months in jail.

Oh nice, you can go to jail! But don't worry, they have added some exceptions. For instance, if you are a parent and you need to help your young child in the bathroom, you are not going to jail for being a transgender if you're a mommy and it's your 3-year-old son. Also, janitors are allowed to still have a penis, even if they're in charge of cleaning women's restrooms. Oh, and if a lady is having a heart attack in the ladies' room, you don't have to check your dick at guest services before going to offer medical help. Guys, we're not kidding.

But this is where it gets fun. If you read the whole ordinance, you might notice that these hicks probably should spend their time on the shitter LEARNING HOW TO WORDS GOOD instead of focusing on whether the person in the next stall has the same genital doohickey as theirs. For instance:

"Quite solicitude"? MAYBE they are trying to say "some goddamned peace and quiet," which would be perfectly appropriate language for a backwoods southern town ordinance. Or maybe they do mean "solicitude," and they're just real concerned local Alabamians aren't showing enough care and concern for their friends and neighbors while they're all pinching loaves together.

Did they write this ordinance on their fucking Obamaphones? Did the auto-correct demons decide to invade and mess it all up and, well shit, somebody woulda proofread it if anybody in Oxford knew how to read?

Or maybe Oxford is just weird and they like to "venerate" each other in the Target potty like Catholic saints. Alabama is a fucked up state, you never know what they're up to down there.

Nah, let's just assume they're blinded by fear and rage at things they don't understand, and that they're real goddamned stupid on top of that, because fuck them.