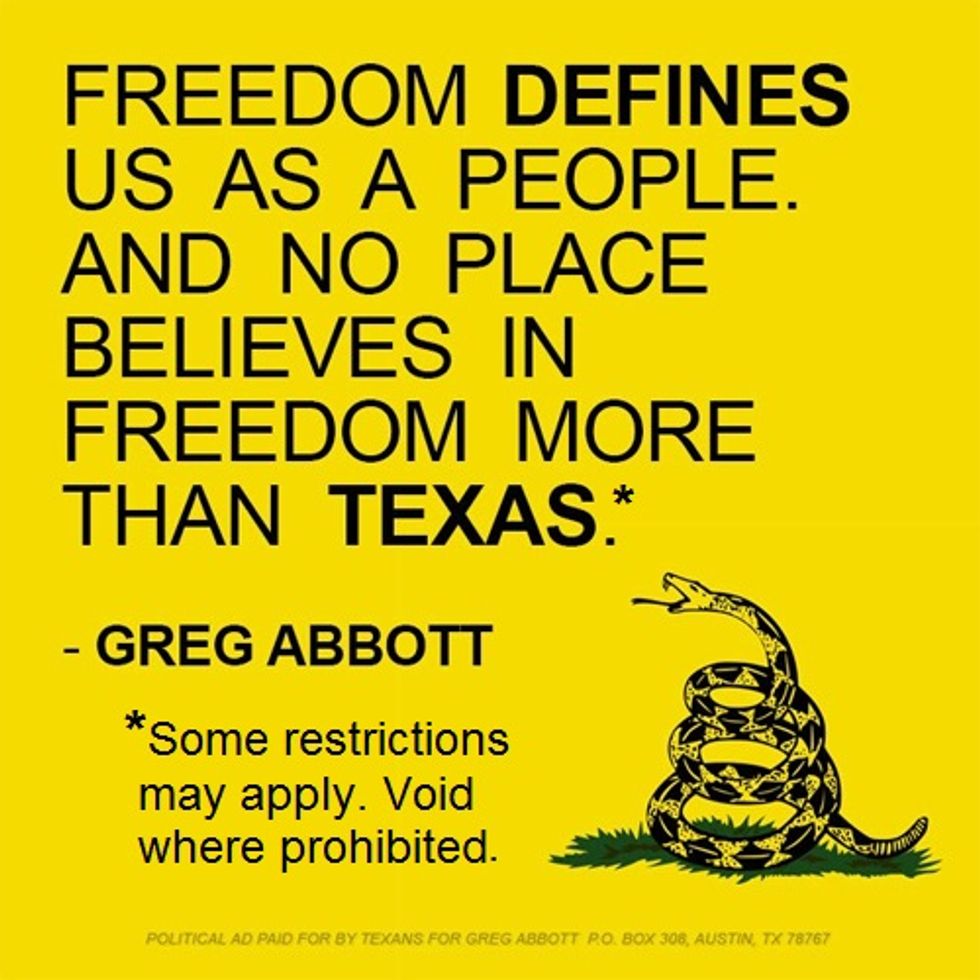 Freedom and local sovereignty are quite the big deal in Texas, unless you and your neighbors want to do something that's plainly wrong, like banning fracking in your town, and then by golly it's time to remember that the battle cry is States' Rights, not city-of-Denton or city-of-Dallas rights, you damned splitters. Which is why Texas Gov.-elect Greg Abbott is warning that unless someone reigns in these turbulent municipal governments, then Freedom Itself is in danger. In fact, if the state government doesn't unify things and tamp town on all this local control, Texas could turn into some kind of nightmare hellscape:

“Texas is being Californianized and you may not even be noticing it,” Abbott said, addressing a downtown Austin conference hosted by the conservative Texas Public Policy Foundation, an influential think tank. “It’s being done at the city level with bag bans, fracking bans, tree-cutting bans. We’re forming a patchwork quilt of bans and rules and regulations that is eroding the Texas model.”

“Now think about it,” Abbott said. “Few things are more important in Texas than private property rights, yet some cities are telling citizens that you don’t own some of the things of your own property that you have bought and purchased and owned for along time -- things like trees.”

“This is a form of collectivism,” said Abbott, who will be inaugurated as governor on Jan. 20. “Some cities claim that trees that are on private property belong to the city, not the private property owner.”

It's madness and socialism, all this local control over people's lives! And what better place to unveil this crackdown on local freedom (for the good of all), than at the Texas Public Policy Foundation, a pro-corporate lobbying group dominated by Texas's biggest businesses, especially the oil and gas industry. And, yes, the Koch brothers.

Abbott was careful to focus on the ridiculous overreach of cities that are regulating where people can cut down trees, and we're certain it's only a coincidence that he made little mention of the city of Denton, which voted in November to ban hydraulic fracturing, a move that would limit the ability of the state's almighty oil and gas industry to drill wherever it wants. Abbott vows to ignore that local ordinance, because all Texans have the sacred right to have flaming tap water. In other impositions on private property, both Austin and Dallas have passed slightly different laws aimed at encouraging reusable shopping bags; Austin banned single-use bags altogether, and Dallas instituted a 5-cent charge for each non-reusable bag. While we'd imagine that the grocery business may have influenced Abbott a little, it was nothing compared to extraction industry lobbyists who just want to drill freely like Texas Jesus commanded.

To promote his Freedom Agenda, Abbott has added the above image (sans our footnote) to his Facebook page, making the case that the state needs to restrict municipalities' freedom to protect everyone's freedom:

It's time for less government and more freedom. That means restricting California-style regulations that cities are imposing on people.

Stupid cities and their collectivism! Where did these uppity cities get the idea that they could enact laws that the state doesn't like?

In other news, Abbott remains committed to defending Texas's stupid Voter I.D. law, fighting federal efforts to enforce the Voting Rights Act, because he is committed to states' rights and local control.