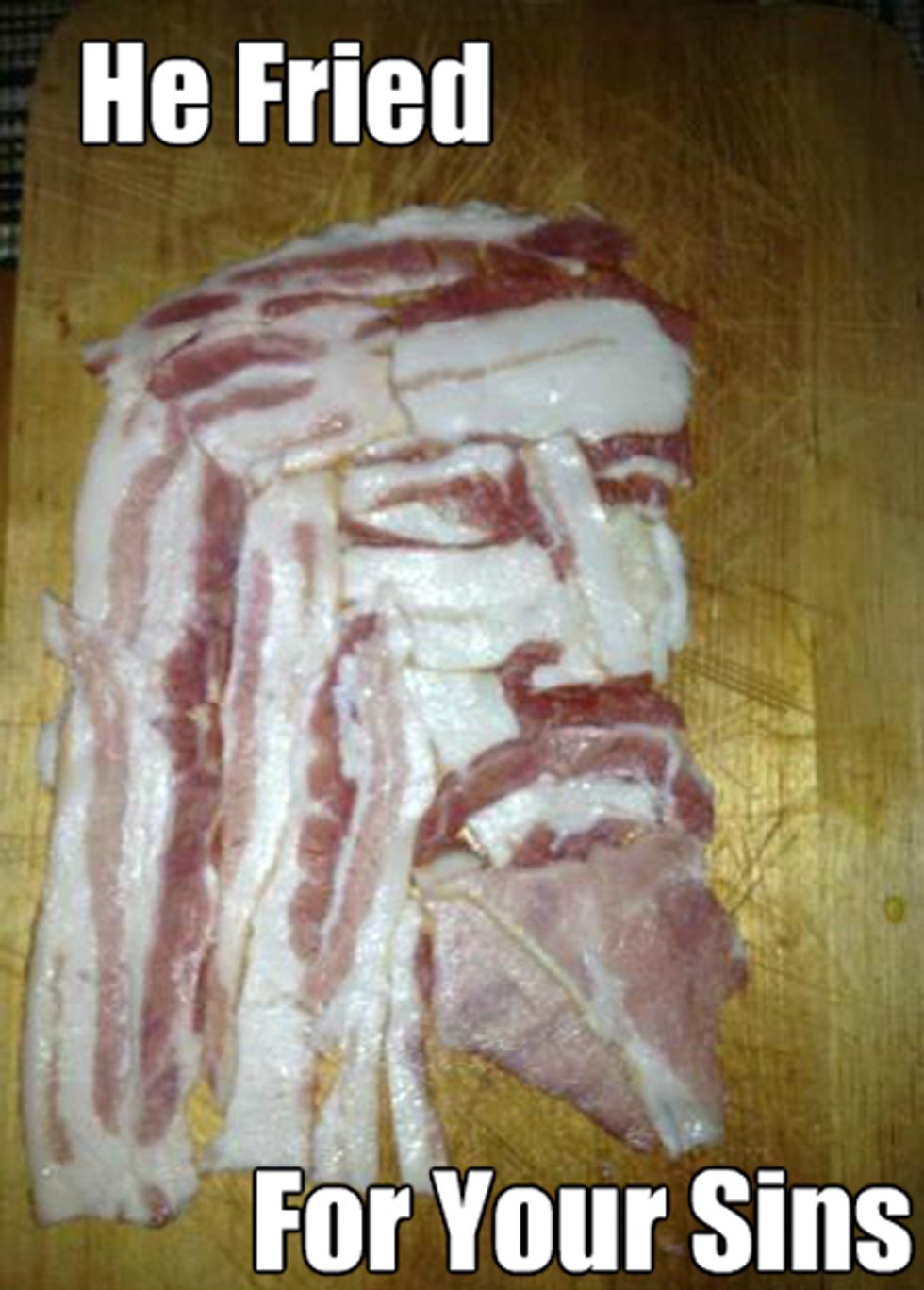 Back in August, Sneakers, a little bistro in Winooski, Vermont, put a little mock traffic sign in the flower bed in front of the restaurant: “Yield for Sneakers Bacon.” It wasn'tespecially well-received by a woman who posted a message to an online community forum, saying that she was a “vegan and member of a Muslim household” and claiming that the sign was "insensitive and offensive to those who do not consume pork.” She noted that Winooski is a diverse community and made an impassioned case over the little sign:

Although I love Sneakers and the delicious food they serve, I strongly believe this sign is unnecessary, offensive, insensitive, and should therefore be taken down.

As is the nature of such things, a small kerfuffle ensued, though on the local discussion board, it was barely even a kerfufflette: the post was met with a combination of "largely respectful debate" and some eye-rolling and suggestions that the poster was a tad oversensitive, and then the owner of the deli, Marc Dysinger, announced that he was taking down the sign, because really, why fight over a silly little ad?

We regret any harm or damage caused & the sign has been removed ... Our goal is to bring joy to Winooski as a community gathering place -- never a source of stress or drama. We always appreciate any advice or input to help us achieve that goal. Thank you neighbors!

Yay! Problem solved, and maybe if anyone wants to revive the old Newhart series, there's a spec script.

Except, of course, this is the Freakin' Internet we're talking about, so of course that didn't end things:

The woman posted a follow-up note on Front Porch Forum, saying that she had received several ugly e-mails attacking her position after her initial post. People accusing Sneakers of being overly PC began posting nasty messages on the bistro's Facebook page. WPTZ broke the story of the burgeoning controversy, and some conservative media outlets picked it up.

And before you knew it, Sneakers was at the center of a Culture War squirmish, with people posting angry messages to their Facebook page accusing them of knuckling under to PC Muslim Terror Liberal Bullying, and demanding that the sign be restored for America and Freedom. Like some kind of would-be peacemaker, the restaurant put up a Facebook message explaining that it really wasn't interested in being a symbol of anything, please:

We are here to serve people BREAKFAST, not politics. We removed the sign that was located on public property as a gesture of respect for our diverse community. There were also concerns raised about safety. Removing it was not a difficult decision. We still love bacon. We still love eggs. Please have the political conversation elsewhere.

This did not help. "Appeaser!" screamed the angry culture warriors, and eventually the restaurant took down its Facebook page altogether. A helpful Facebook Patriot put up a new page, Tell Sneakers Bistro How You Really Feel, so that people could castigate Dysinger for giving in to creeping Sharia and stuff.

And since then, you can find any number of wingnuts complaining about how horrible it is that one troublemaking Muslim could RUIN AMERICA with all their PC, and eventually the "issue" even got mentioned by the American Patriarchy Association's Bryan Fischer, who explained that America is very definitely a Christian nation because our restaurants serve bacon:

"You want one single item of proof that America is a Christian nation and not a Jewish nation and not an Islamic nation?” he asked. “One single bit of proof is all you need: we freely allow restaurants and grocery stores to sell and to serve bacon. That can only happen in a Christian country.”

This bacon thing is really important to Fischer, and now, to protect the sacred right to bacon, he wants America to revise its laws to require all immigrants to convert to Christianity:

You see, if we just took this simple step and did "immigration God's way," then

those who came to our shores would be expected to adopt our religious values and traditions -- that would mean Christianity and not Islam -- and they would leave behind their religion and their god.

That last one is especially nice, since apparently the prisons are full of Muslims anyway. Fischer didn't quite explain what would be done about existing Muslims who hadn't immigrated here, but we're sure he's been giving that a lot of thought, too.

As for Sneakers, they hired a PR firm in late August; their advice was to "focus on its local community and customers" and ignore the Interwebs as much as possible, since the loudest whining has been coming from outside Vermont anyway. Sneakers' Yelp score has come back up after the site removed all of the 1-star reviews accusing Dysinger of treason. And Byran Fischer, we should note, is located in Tupelo, Mississippi, where he can drive around with bacon hanging from his car's rearview mirror and antenna, if he wants to.

Our only regret is that all the hatred directed at this little nothing of a controversy has focused on the original complaint coming from a woman who mentioned Islam, when in fact the real cause of her being a troublemaker is obviously the fact that she's a vegan. Those people are just freaking impossible.