Overreaction To Minor Oval Office Decorating a Metaphor For Something 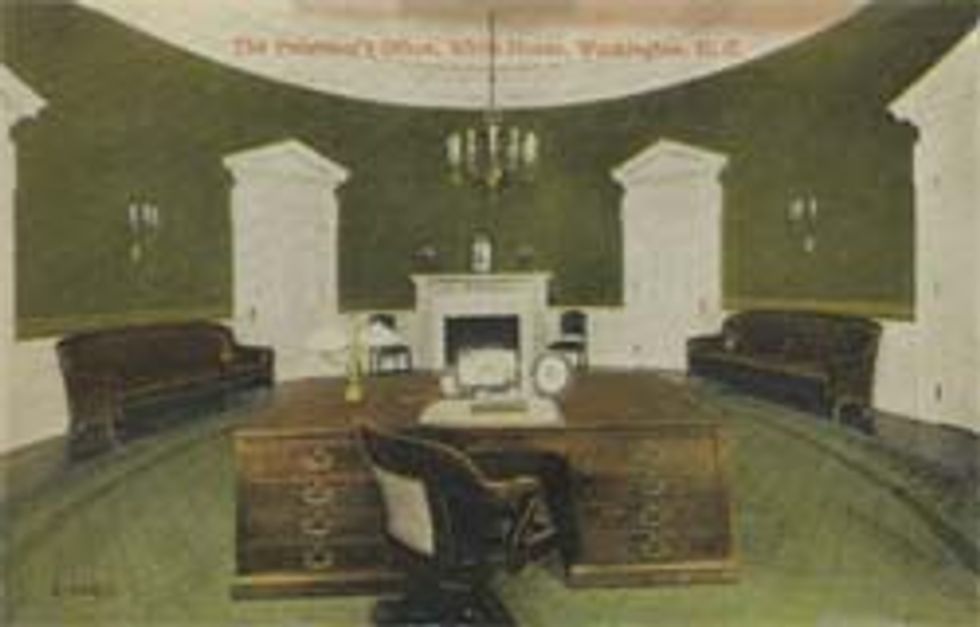 Going on vacation is the best time to have one of the rooms in your house redecorated! Putting those words in that order is your key to enraging Americans everywhere, because Americans can not afford "redecoration" or "homes" or "rooms." But elitist Barack Obama decided that his little trip to Gaysachusetts Island was the perfect time to have the Oval Office redone. If he had chosen to fall in line with Tea Party aesthetics, he'd have redecorated in line with Founding Father William Howard Taft's principles, illustrated in the picture. But instead he decided to spit in America's face and decorate in neutral hues.Neutral hues! Monsters!

Since White House photog Pete Souza and his public domain pictures are also on vacation, you will have to click through to see sexxxy redecoration pix, or just enjoy the word-images spun by the New York Times:

The look, which includes new and reupholstered furniture and new paint and wallpaper, is more modern and tends toward neutral hues of brown and taupe, rather than the gold and yellow tones favored by his predecessor, George W. Bush.

Mr. Bush’s yellow brocade couches have been replaced with two custom-made sofas of brown cotton that resembles velvet. They face a boxy table, fashioned from American walnut and mica, that features a fruit bowl – not flowers – as its centerpiece. There is a lone navy blue pillow on one of the couches, which pulls in the blue from some new, modern table lamps.

The makeover was not done at taxpayer expense; the White House said the costs were covered by the White House Historical Association, a nonprofit group, through a contribution from the committee that paid for Mr. Obama’s inauguration.

Yes, we've gone from gold and yellow to brown and taupe! That certainly is a completely boring and non-radical change of aesthetic direction, Mr. President. Hmm, what do the sane, rational commentors on the Politico, the Internet's premiere Lincoln-Douglas debating society, have to say on this point?