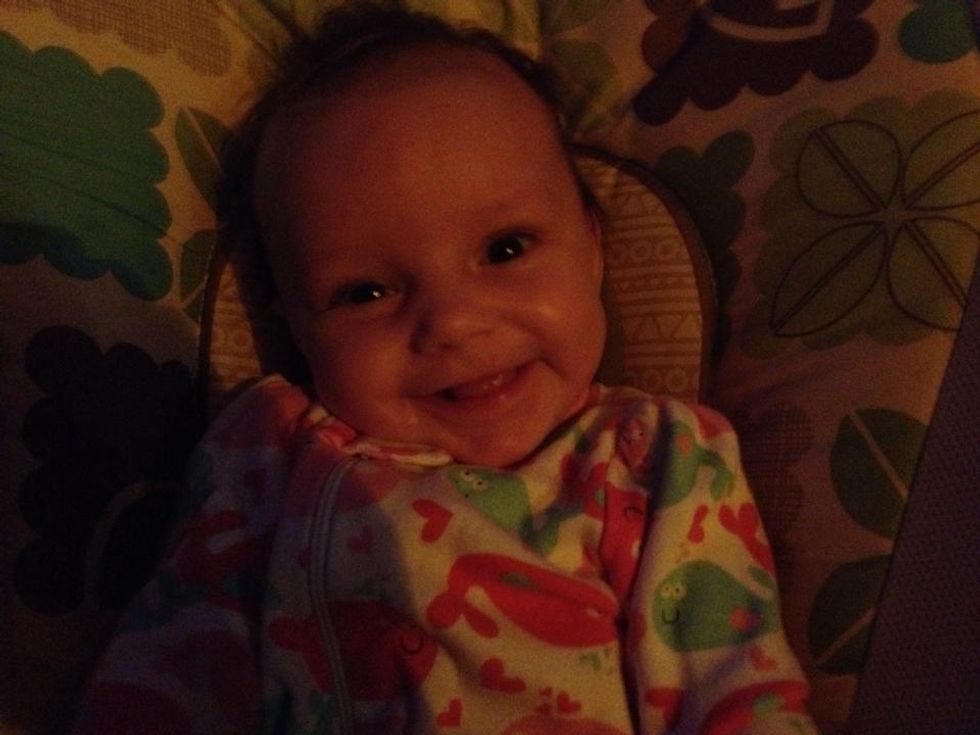 We could have used a picture of Ann Coulter, but nobody wants to see that. Here's Wonkette baby, grinning at you instead.

Oh look, another weekend almost come and gone. But it's still Sunday afternoon, which means we can still day drink or sleep all day or spend the day crying (don't do that, Wonkers!) or whatever it is we want to do. Also, we can count down the week's top ten stories! One of them is about Ann Coulter, and about how she briefly became the focus of the internet's discussion for like a day, for saying something assholish (big surprise there). Trouble was that, despite her best intentions, she was kind of correct? Anyway, we'll get to that in a minute.

First, some housekeeping. The Wonkette Primary is still going on, and if you've already voted, that's okay, VOTE SO MANY MORE TIMES! If you don't remember, the way you vote is to buy all the t-shirts of the Democratic presidential candidate you love the best. If you are sexxxed up for Hillary, then buy the sexxxy Hitlery t-shirt you see below! If you feel the same sexxxy sensations, but for Bernie Sanders instead, then buy HIS t-shirt! Yr Wonkette is wearing ONE of the shirts right now, which means we are way ahead of you in the "voting" department, you'd better catch up! If you haven't seen it, this is the Hillary shirt:

Don't you want to buy this right now? YES, YOU DO!

Okay, one more thing before stories. GIVE US MONEY NOW. We do the internet writing for you each and every week, and now that it's debate season, some days we stay up until Holy Shit O'Clock, liveblogging and making all the jokes. So please to give us $5, so we can keep being so great. Wasn't that easy? Your moneys will be spent very wisely, and probably not even on drugs! Anyway, GIVE US YOUR MONEY.

That is a very demanding face! Better do what she says.

1. The number one story of the week is not about Ann Coulter, because she's never number one. Instead, it is Wonkette's lovable liveblog of Wednesday's insane Republican debate, which we lovingly titled "Who Let A Girl Into Donald Trump's Sausage Party?" Go relive the madness!

2. And here's Ann Coulter. During the debate, she tweeted "How many f---ing Jews do these people think there are in the United States?" It made people MAD! Apparently this was the first time she ever said something that could be read as anti-semitic. But no, the sad thing was that she followed it up with a thing about maybe the Republicans are sucking up to evangelicals, and the thing is, she was right. Let Kaili Wonksplain you it.

3. That crazy story about the black Memphis doctor, Marcia Bowden, who was jailed in Mississippi with her husband after a routine traffic stop gone VERY wrong.

4. Bristol Palin claimed to be very upset Ahmed Mohamed was invited to the White House, but we think she's just jealous because she knows how to make things too (babies). Where's her invitation?

5. The second story in the top ten involving the police department in Southaven, Mississippi. This time it was the follow-up on that nice dad who died in the arms of the police after a Widespread Panic concert. Surprise, he didn't die of an "LSD overdose," because that's really not a thing that happens.

6. New Mexico mom refuses to pray to God, so the court takes away her kids. Because that's a thing now in America, we guess.

7. Bristol again. This time it's because she's still mad about Ahmed, and she knows race had NOTHING to do with it. In fact, she's worried the same thing could happen to her little boy! Uh huh.

8. Speaking of Ahmed, also, too, wingnuts have HAD IT with his Muslim-ness and his "science."

9. Making its second appearance in the top ten is that story about Mike Huckabee thinking that if gay marriage is legal, then Dred Scott must still be in effect. Go read that story and RAGE SOME MORE AT HIM.

10. And finally, the number ten story is the follow-up on the black Memphis doctor, with the police department's arrest reports, which didn't seem to even bother making excuses for how they arrested her for the crime of being uppity.

So there you go, Wonkers. Those are your winning stories. They are very good stories!

Remember, we are also at your service on the Facebooks, the Twitters, and the Tumblrs! And the Flipboard! Wonkette is all the places, and all the places are Wonkette.

Oh and because why not, follow your individual Wonkettes on the Twitter, because that is a nice thing to do. We are at @KailiJoy, @DoktorZoom, @EvanHurst,  @shypixel, and @commiegirl1, which is your lovely Editrix.

Then, you should sign up for the Wonkette newsletter, so that you can get a secret gay love note from your Wonkette every day! (Mostly.)

OH, and did you know you can buy more sexy Wonkette apparel in the Wonkette online swag emporium? Yes you can! There are Bernie Sanders t-shirts and Bernie Sanders coffee cups, and also things with Elizabeth Warren and Joe Biden on them, and also panties with teeth. For bigger-bodied Wonkers, we now have 4XL sizes on the Bernie t-shirt!

Again, your Wonkette loves you very much! If you missed your opportunity above, don’t even worry about doing hard stuff like scrolling up. You can just click THIS link and give us $5. Or you can give us more, we are not opposed to that!