gay marriagept. Won't Someone Please Think Of The Homophobes?scotussupreme court 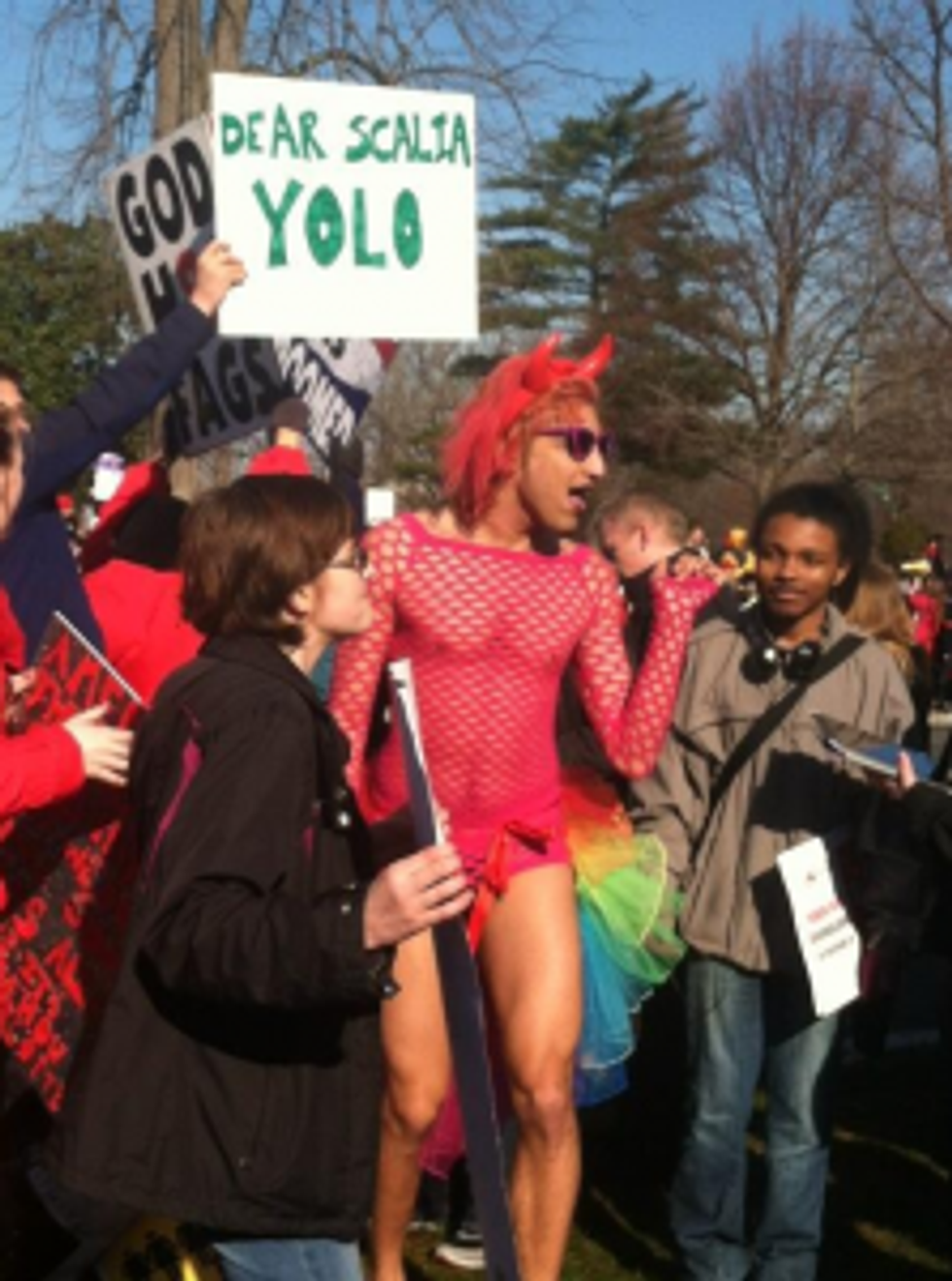 Are all men (we will not even discuss the ladies right now) created equal except the gay kinds? Or does American Jesus want us to uphold the sanctity of Newt Gingrich's three marriages?

These were the questions considered by the Supreme Court Tuesday morning. (Kind of; we are paraphrasing just a little.) The justices haven't decided anything yet because that is not how things work, but that doesn't mean we can't make idle predictions about what the court might decide based on various "hmmms" and questions the justices asked and also what people chanted outside the court, because that is how the laws o' the land are really made.

For example, Justice Samuel Concern Troll Alito appears concerned that all this "equality" stuff is moving waaaaaay too fast and let's all just calm the fuck down and wait a few more decades before rushing into anything:

But you want us to step in and render a decision based on an assessment of the effects of this institution which is newer than cell phones or the Internet? I mean we -- we are not -- we do not have the ability to see the future.

And if the Constitution prohibited anyone deciding anything until the issue was at least older than the Internet, Sam, that might be a problem. Now go sit in the corner with your dunce cap and watch some School House Rock.

Fellow concern troll Justice Anthony Kennedy also has concerns about how now maybe is not a good time for equality, please check back later, thanks. One guy at SCOTUSblog, which is the go-to site for all your What The Supremes Did Today needs, says:

He appeared to be troubled about the Court entering “uncharted waters,” on the core issue of who may marry, but at the same time, he also did not look comfortable with any of the other, more limited options. So he openly wondered why the Court had agreed even to hear this case.

This other SCOTUSblogger, however, says "the Court probably will not have the five votes necessary to get to any result at all, and almost certainly will not have five votes to decide the merits of whether Proposition 8 is constitutional." SAD FACE maybe? Mr. Other Blogger says some justices might rule like this, but other justices might rule like that, so ultimately, no one knows anything yet, so NEUTRAL FACE we guess? But wait!

The upshot of either scenario is a modest step forward for gay rights advocates, but not a dramatic one. The Court would stay its hand for some time for society to develop its views further. But combined with a potentially significant ruling in the DOMA case being argued tomorrow, the Term will likely nonetheless end up as very significant to gay rights.

Also, it was Take-your-lesbian-cousin-to-work Day for Chief Justice Roberts, and we have no idea what the hell that is supposed to mean, but it could mean he was publicly shaming the homophobes on the court, or maybe he wanted to claim some of his best relatives are ... you know ...

We don't know. We don't know what any of this means, and no one else does either, and we won't know until the court actually issues its decision sometime between now and a few months from now, probably, but it sure feels like America is getting gayer and gayer by the minute, with senator after senator coming out -- for marriage equality, that is. Even the Republican senator from Ohio, Rob Portman, recently came to the sudden realization, after thinking about it for a few years, that he would like equal rights for his gay son please.

So we will just have to wait and see and in the meantime make baseless speculations, but until the Supreme Court makes a decision -- or makes a decision not to make a decision because the majority of justices are cowards who would like to punt on this "uncomfortable" question until cell phones are a little older -- Georgia Senator Saxby NOT GAY Chambliss is still safe from the homosexual agenda and will not be forced to gay marry anyone. For now.