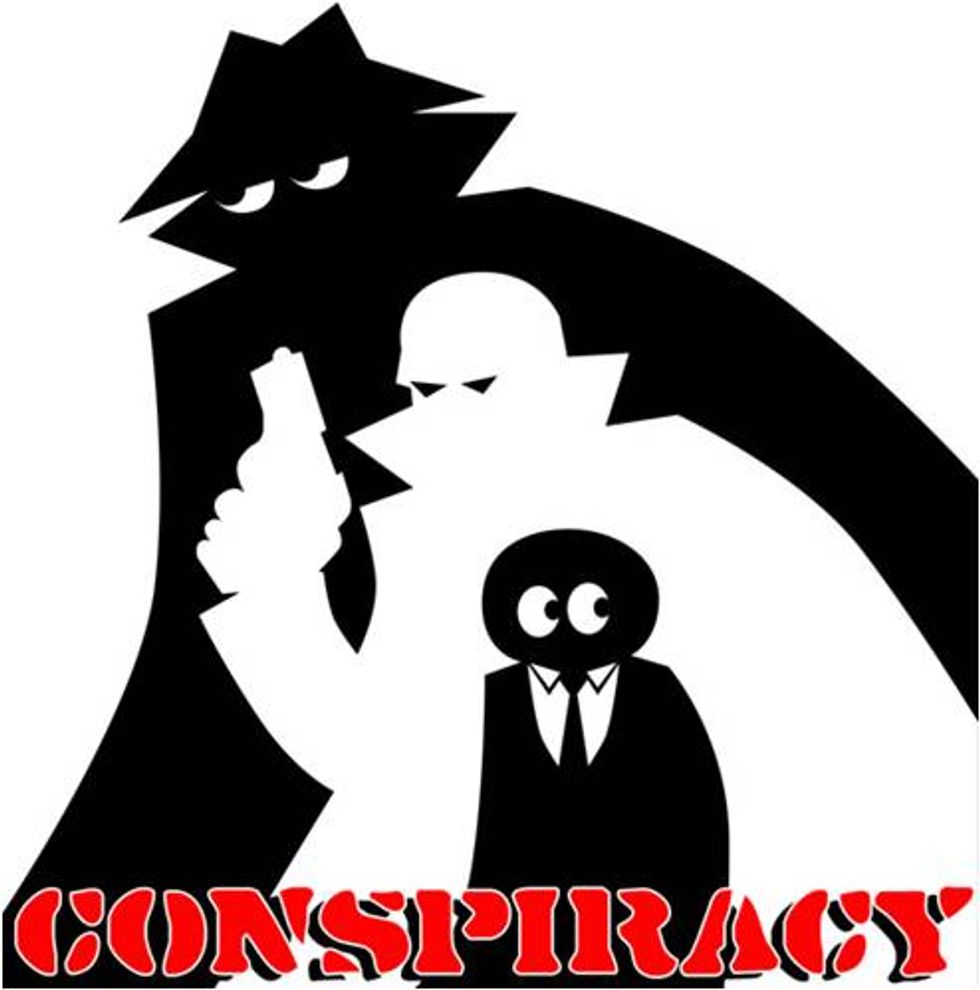 Follow along, libtards, as some guy on the internet blows your whole world up.

Last week's town hall debate was notable for many things - Romney trying to bumrush Obama like eighteen times, Obama not falling asleep five minutes in, and Candy Crowley sort of correcting Mitt Romney by shooting him right in his stupid face. But surely there is an explanation besides "Mitt was completely wrong" for why Crowley dared stand up to America's Next President?

A blogger at something called "The Last Refuge" and/or "The Conservative Treehouse" (they LUV Andy Breitbart!) has compiled an exhaustive breakdown of exactly how Crowley, Barack Obama, Michelle Obama and Kerry Ladka, the infamous questioner/executioner, conspired to completely and totally embarrass Mitt Romney for about fifteen seconds and therefore lose him every swing state.

Because the theory is complex, multifaceted and largely based on a series of "coincidences" so startlingly coincidental they cannot be coincidences at all, we will give you the Cliffs' Notes version.

One: Kerry Ladka came up with the question the day before the debate, WHEN CANDY CROWLEY HAD SAID SHE ALREADY CHOSE THE QUESTIONS AND STUFF.

Candy Crowley told Erin Burnett on CNN’s show Out Front, Monday Night 10/15, that she had collected the questions from the invited and vetted debate audience at Hofstra University and was reviewing them. This was Monday on the 7pm broadcast of Erin Burnett. The Debate was Tuesday.

….this question actually comes from my, err, um, a brain trust of my friends at Global Telecom Supply in Mineola, yesterday we were sitting around talking about Libya…

If Candy Crowley already had the audience questions assembled the day before, how could Kerry Ladka and his brain trust friends have been writing one?

The simplest answer: he could not have. Nobody at or near Hofstra University can form a question within any period less than twenty hours, which makes people asking about specials at bars the absolute worst.

B: Obama KNEW the question was coming and where it was coming from and the guy's name and just fucking everything, Jesus.

When she said “we are changing topics to a question from Kerry… from Kerry Ladka“, Obama already knew what to look for and where he was seated. There are numerous “TELLS” Watch the video – it is at 1:06:35 Watch.

President Obama moved (physically walked) directly toward Kerry Ladka, and said “Hi Kerry“,… (but oddly Kerry had not moved, nor identified himself) …. then, rut roh,…. after an internal psyche trigger kicked in, President Obama does the ((‘oops’)) *looks around* as if to say where am I going… then asks “what’s your name“?

Look, I was going to do an exhaustive breakdown of all the times anyone asked a question and when the candidates moved toward them, but why bother? Even though Scary Barry was told Ladka's name before Ladka started speaking, it is well known he does not listen to anyone who is not black. Therefore, the only way he could have known is if someone used Negro Telepathy to tell him BEFORE Ladka asked his question!

#3: Ladka's question was TOO good.

Thirdly, within the carefully worded question itself is a very nuanced descriptive delivered by Ladka:

…”and we were reading, and we became aware of reports that the State Department refused extra security for our embassy in Benghazi Libya prior to the attacks that killed four Americans.

Who was it that denied enhanced security, and why?

The term “enhanced security” is the term used by the White House spokespeople and by the State Department spokesperson(s). It is just plain awkward and oddly not in a normal context for a general question from an unattached observer. Not to mention it perfectly “Tee’s Up” the only construct, and context, that Obama could defend and expand upon.

Don't ever have a question "tee'd up," guys, it's totes painful.  Medicare covers less-painful tee'ing options.

It is simply painfully awkward for people to use words they obviously read from one of their 1,400-plus mentions in news stories in the past month, especially anyone near Hofstra, because they are functionally brain damaged from birth.

LETTER DEE: Michelle Obama clapped after Candy Crowley "corrected" Mitt, just like Jackie Kennedy did after she had JFK shot.

Previously covered on Wonkette. Still a travesty after all these days.

Kerry Ladka works for Global Telecom Supply. More specifically he works for Isaac Elyassoff who is the current Vice-President at Global Telecom Supply. Guess where Elyassoff is an alumnus of ? Yep, Hofstra University, the site of the debate. It appears Elyassoff is in his mid twenties having graduated from Hofstra with a degree in Marketing and Business 2002-2006. Obamabot? Ideology? Check out his twittery friends.

Why would random undecided voter, Mr. Kerry Ladka, of Long Island NY, be calling media outlets, media pundits, and requesting to be on their shows?

You sort of lost us there, guy, because Ladka was trolling for media appearances the day after the debate, which kind of makes complete sense, but, um...also, why did you link to a random Brooklyn-based political reporter?

Wait...if this part of the conspiracy, the key, critical portion, is complete bullshit, then could the whole rest of this be...no. No. NO.

We know what you did, entire liberal media apparatus. And we will not let you get away with it just because you can easily disprove every element of the allegation. That's how these things work.