Investigation Looks for 'Muslim Bias' in Texas Schools, Finds Christian Bias Instead (So It's Not Biased, Of Course) 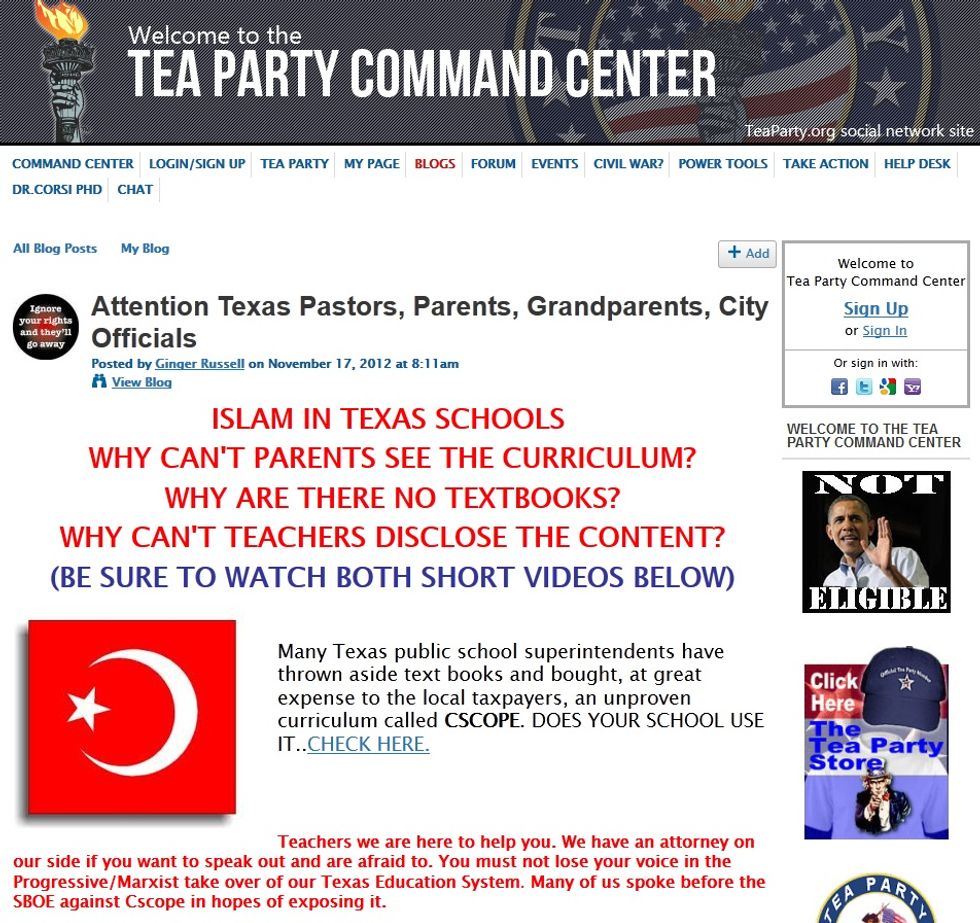 Anyone who thinks that school districts aren't responsive to community concerns should talk to district and school board members of the Irving, Texas, Independent School District. When they received a clearly insane chain email claiming that a curriculum used in the schools was "INDOCTRINATING ISLAM," they didn't just delete it and go back to looking at porn and forwarding jokes about Barack Obama, no siree -- they promptly demanded an investigation to see if their textbooks really were packed full of Islamist propaganda. You will be relieved to know that a 72-page report by the organization that provides the curriculum to the schools found that, instead of Muslim bias, the curriculum is actually far more biased toward Christianity, just the way Jesus and Thomas Jefferson wanted it to be.

For some reason, administrators were deeply concerned by a late-November email rant from some loon named Ginger Russell, so they wanted to look into whether the district's online social studies curriculum, CSCOPE, is full of communist pro-Muslim anti-American propaganda. And you can see why the email was credible -- it even linked to this very convincing Tea Party webpage, which doesn't appear the least bit unhinged.

In addition to suggesting that CSCOPE claimed that Clara Barton founded the Red Crescent as well as the Red Cross, the email (a version of which has made it to Facebook) also accused Texas teachers of telling students that the Boston Tea Party was a "terrorist act." (Here's the offending lesson, from 2010 -- it actually suggests that the British would have seen the Tea Party as terrorism, while the colonists would have seen it as civil disobediance. Nuance is scary!)

After reassurances from the group that administers CSCOPE failed to quell the fears of an Irving school trustee, the superintendent asked them to address the board at its December 10 meeting. As the Dallas Morning News explains, the group's director went out of her way to subject the curriculum to the toughest available inquisitor:

The director, Jan Moberly, said she hired a “very socially and fiscally conservative” former social studies teacher who “watches Glenn Beck on a regular basis” to seek out any Islamic bias in CSCOPE.

“I asked her to look for anything she would consider the least bit controversial,” Moberly told the board. That entailed reading through every textbook and cross referencing each religious reference with the CSCOPE guidelines.

Talk about your buried ledes! They found a Glenn Beck fan who could type a report without USING ALL CAPS!!!! And so, after the board opened its meeting with a prayer “in Jesus’ name” (take that, ACLU!), Moberly gave a 30-minute report accompanied by a 72-page handout, which listed "every religious reference in the CSCOPE curriculum, from kindergarten to high school." How's this for some surprise results?

Christianity got twice as much attention in the curriculum as any other religion. Islam was a distant second.

- The Red Crescent and Boston Tea Party reference mentioned in the email were nowhere in CSCOPE’s curriculum, although they may have been in the past. [2010, as we noted above -- Dok Z]

- If there was any Islamic bias in CSCOPE it was “bias against radical Islam.”

So sorry, Texas! Looks like maybe the government schools aren't pushing radical Islam after all. But then again, how do we know that the curriculum is biased enough against Islam?

Check out Wonkette on Facebook and Twitter and even on Tumblr. And if you fear creeping Sharia, or even My Sharona, Doktor Zoom is on Twitter, also, too.