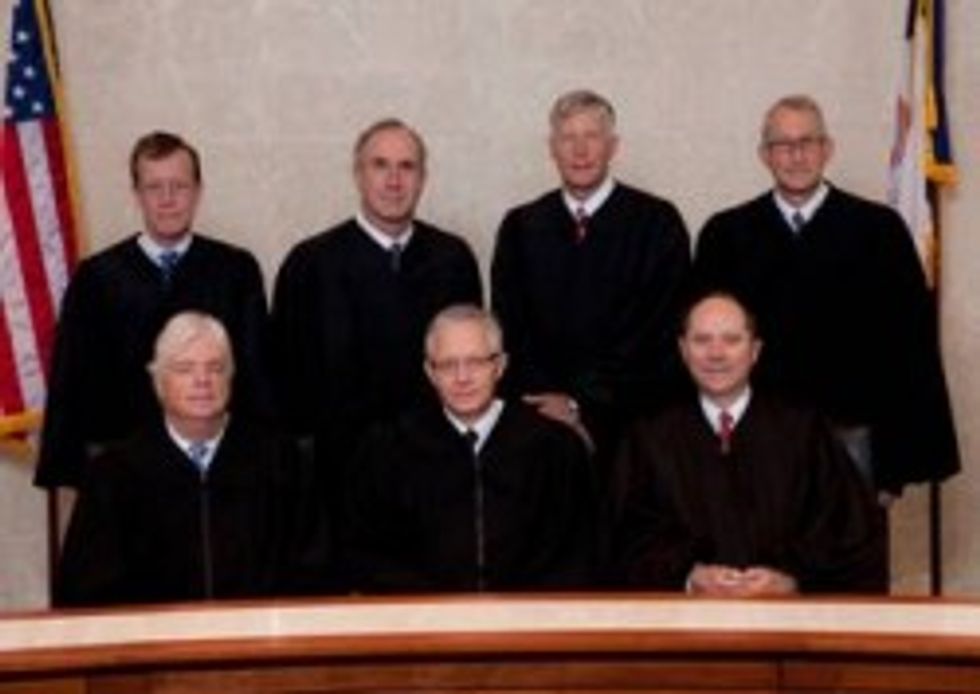 In the race to the bottom of the barrel of the laboratories of democracy, Iowa is making a very very strong showing. Sure, competition is tough when you've got to worry about the state legislatures in Tennessee, Missouri, Virginia, and other places that urban elitists like yr Wonkette do not wish to visit. But then the breadbasket of America or the pig capital of America or the milk headquarters or whatever the fuck Iowa is steps up and shows you how it is done, son. How? By threatening tolower the pay of their Supreme Court justices, but only the ones that love love love teh gheys.

A handful of House conservatives want to reduce the pay of Iowa Supreme Court justices involved in a 2009 decision striking down a ban on same-sex marriages as part of an effort to maintain the balance of power in state government.

“It’s our responsibility to maintain the balance of power” between the three co-equal branches of government, Rep. Tom Shaw, R-Laurens, said Tuesday.

The justices “trashed the separation of powers” with their unanimous Varnum v. Brien decision and implementation of same-sex marriage without a change in state law banning any marriages expect between one man and one woman, added Rep. Dwayne Alons, R-Hull.

Their amendment to House File 120, the judicial branch budget bill, would lower the salaries of the four justices on the seven-member court who were part of the unanimous Varnum v. Brein decision to $25,000 – the same as a state legislator.

Yes, the best way to ensure separation of powers is for your pissant legislature to call the wahmbulance every time the judicial branch does something they do not like. That is exactly what the founding fathers said, we think? Isn't it in the Bill of Rights as Amendment Eleventy?

Lest you think this is an isolated bit of spittle-flecked anger over homosexcellence, hahahaha of course it isn't, dummies:

Iowa Republicans are determined to remove the nine state supreme court justices who ruled unanimously in 2009 to allow same-sex marriage in the state, and they'll try just about anything. In 2010, anti-gaygroupsfunded a successful campaign to oust three justices in retention elections. Then Iowa anti-gay leader Bob Vander Plaats called for the remaining justices to resign. When that didn't work, state Republicans then tried to impeach them. Last year, an effort to remove a fourth justice failed at the ballot box.

Never stop, Iowa GOP! Climb every mountain! Ford every stream! Follow every rainbow! Until you find your dream of really sticking it to the gays and the judges that love them, but not sticking it to them in a gay way because ewwww.

We are not lawyers in Iowa, even though some of yr Wonkette are lawyers, but this does not seem legal to us? Either you're dicking over the judges for their speech expression in which case hello! First Amendment, or you are dicking them for performing the essential function of their job and deciding things, which we are pretty certain is not OK, even in Iowa?

In case your devious mind works like ours and you are thinking "Wait? Is this a genius plan, or the genius-est plan, because the judges whose pay you lowered would have to recuse themselves when the case came before the Supreme Court and then victory?" NOPE, sez the comments to Iowa court rules:

The rule of necessity may override the rule of disqualification. For example, a judge might be required to participate in judicial review of a judicial salary statute...

Oh well, Iowa GOP. Better luck next time! Perhaps you can just start outright threatening the justices' wives or offspring or pets or something until you get your way. That's probably totally legal, so give it a shot.