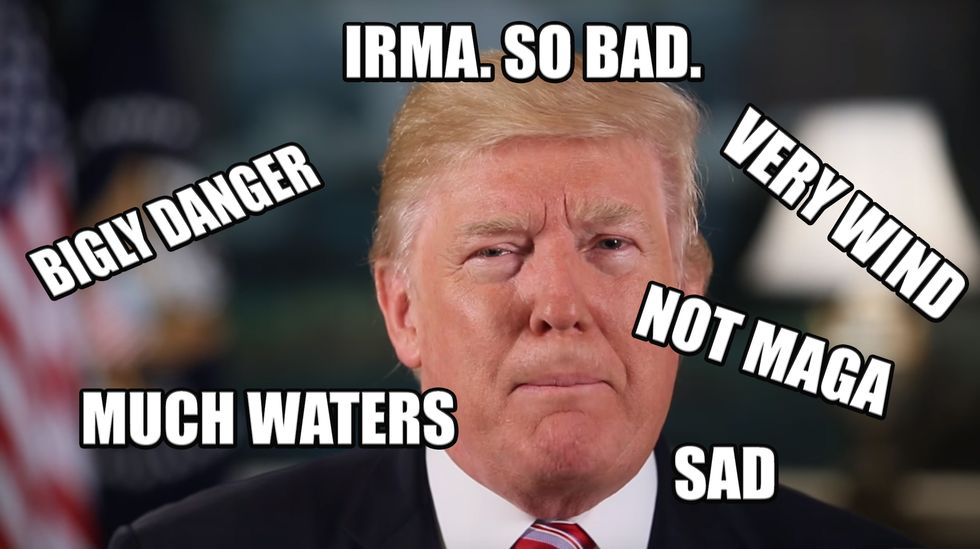 Morning Wonketariat! Yr Doktor Zoom is taking a sick day, as if that is even allowed, but we're still going to be bringing you all the newses, just with less institutional knowledge and dad jokes! Here's some of the things we may be talking about today.

Florida seems to have dodged a bullet as Hurricane Irma pushes inland, but emergency officials are warning residents in Georgia, Alabama, and Florida to stay indoors as the danger of fallen power lines, flooding and weak trees continues to linger.

Federal officials say they can "walk and chew gum at the same time," but congressional conservatives are bitching about the cost of all that gum and wondering why they have to be so LIBERAL with aid for disaster victims.

Reince Priebus and Don McGahn have lawyered up for Trump-Russia in fear that Robert Mueller might ask them to do a 'splainering or two.

Devin Nunes is hot on the trail of Trump's pee pee tape, and he's trying to throw yellow water all over Robert Mueller and flush THE DOSSIER.

Former Montana Democratic Sen. Max Baucus, who, you know, just killed the public option that one time, has flip-flopped and now wants to give healthcare to all the poors. Welcome to the party!

Tea Party wackos are pissed at Steve Mnuchin for lecturing them on the debt ceiling, seeing as the Trump administration keeps stepping its own shit, with PA Rep. Ryan Costello stating, "If it wasn’t so serious, it would have been a comedy."

Surprise! Trump's businesses are hard at work in Not America, even though Trump keeps promising to make 'Merica gooder.

Determined to look under every nook and fanny, Jeff Sessions wants the NSC staff to take lie detector tests in order to find out who keeps leaking the size of Trump's baby dick to the press.

In retaliation towards all the sexy nerds with brain meat, former president Steve Bannon is declaring war on the GOP for booting his lunatic troll army out of Washington.

Peter Baker at the NYT says that Donald Trump is the first "Independent" to become president, but that's assuming you discount all the election fuckery, race baiting, war mongering, greed, and selfishness that have been cornerstones of the modern Republican party for the last century.

Poor kids are having a harder time going to college, furthering gaps in wages and social mobility. Not a joke.

The DOJ desperately tried to hide a magical slush fund for fancy crap by laundering it through informants. Think of it as a public-private partnership.

Now that weed is becoming legalized, some science bozos are worried about the increasing number of adults who are constantly stoned.

A municipal judge in rural Mississippi has a problem with the state flag, and he wants the SCOTUS to step up and say that it's a racist homage to traitors.

California is sick of being ignored, Dan, so it's trying to push for early primaries in an effort to be relevant whatsoever in the 2020 Democratic presidential candidates.

US surveillance assets were tailing an ISIS convoy in Syria until Russia asked us to close our eyes, count to 10, and piss off, so coalition forces bombed the road instead.

Tiffany Trump is full of so many sads that Georgetown Law is fucking up her ability to attend fancy fashion parties and act like an elite New York socialite/party-bimbo.

Take a moment and giggle with us at these amazing quotes from George Clooney calling out Steve Bannon as an ass-licking cuck who would have done anything to make his Shakespeare rap musical about the LA riots.

And here's your morning Nice Time! Chendra, the Borneo elephant! She was rescued, and now she's an auntie!

We're supported by readers like you! Help us out with some money, and we will love you many bunches!