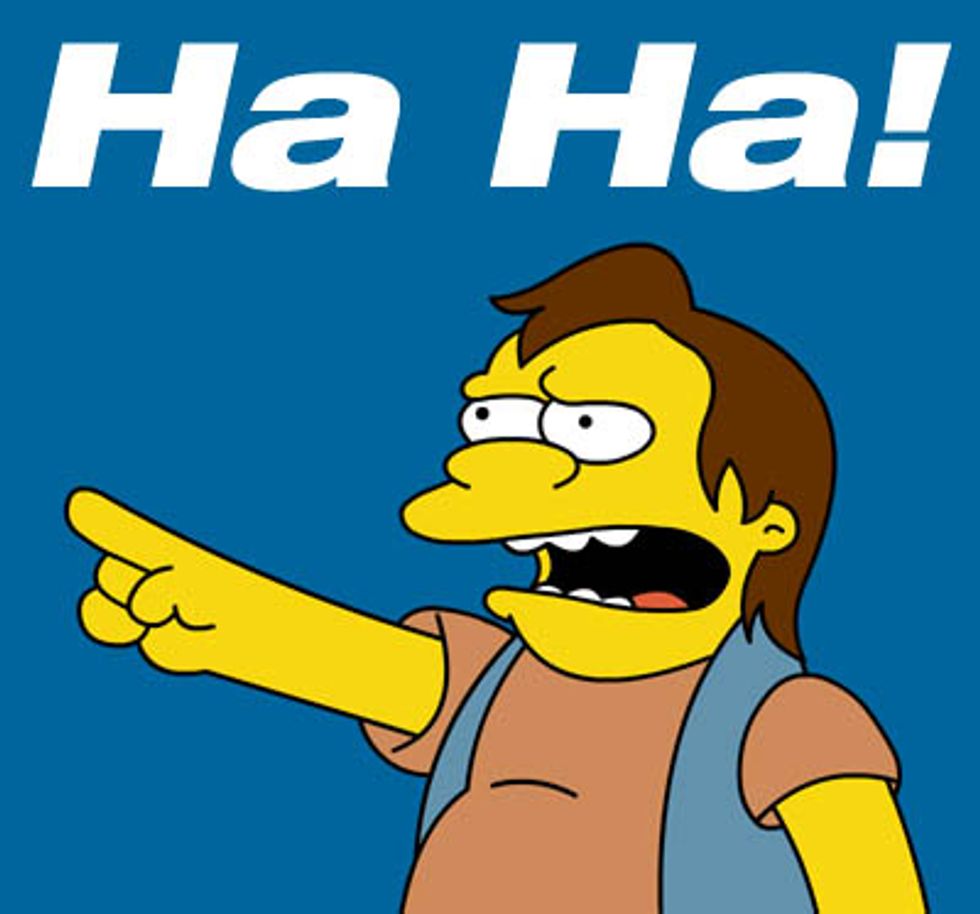 In addition to being a cosmic turd straight from Satan’s bunghole, Rep. Darrell Issa (R-CA) is now just a laughing stock on Capitol Hill. If anyone anywhere takes this clown seriously in the future, we will be shocked. How has Issa managed to make himself an even bigger fool, the kind of ass that everyone, even small children, stop to point and laugh at?  It all goes back to the IRS, and this non-scandal that Issa bet his entire reputation as Chair of the House Oversight & Government Reform Committee upon.

Salon hits the nail on the head:

Remember the IRS scandal? How the tax agency improperly singled out Tea Party groups for extra scrutiny in a nefarious political vendetta against conservatives because the agency is either inherently liberal or was acting on orders from the Democratic President? Remember how it cost even Mitt Romney the election?

Well, as it turns out, that whole scandal is entirely bogus. False. A fiction. The entire notion that the agency singled out groups with “Tea Party” in their name in simply wrong, we learn today, thanks to new documents revealed by the Associated Press. The documents, and confirmation from officials, show the IRS targeted groups with other keywords in their names, including “Progressive” and “Occupy.”

Hahahahahaha, suck it, Rep. Issa. And suck it all you teabagger crazies complaining about how much butthurt you went through while suffering from your goddam persecution complex. Turns out you are all a bunch of whiny babies who jumped the gun before all the facts were in, and now you look like completely incompetent political hacks who are better off crawling back to whatever cosmic bunghole you came from.  Let’s wonksplain further.

All this shitfuffle started when the IRS Inspector General, J. Russell George, released a report saying that the IRS targeted conservative groups for additional scrutiny if they wanted tax-exempt status. Turns out that JRG is about as incompetent as Rep. Issa. He spent more than two years putting together a report for Congress, but failed to mention that the IRS was also targeting progressive groups. WHAT THE FUCK, MAN? Perhaps JRG is just vastly incompetent at his job, because the new guy in charge of the IRS found these new lists within a month. Perhaps there should be a special investigation of the political motives of one J. Russell George, because that is just really sloppy, or part of a giant conservative conspiracy that may or may not include Darrell Issa… we’re just speculating here. It would be irresponsible not to.

Since that report in May, Darrell Issa and the entire House GOP have been on every fucking cable show ever saying that this was the biggest scandal since the beginning of the universe ever. There was an overflow of butthurt about how this was a giant conspiracy to use the IRS to target political enemies just like Nixon, except worse because this time it was conservatives who were targeted. There have been 863 Congressional hearing per week, including ones where teabaggers got to come yell, “Help! Help! We’re being repressed!” This was finally a scandal that could bring down His Royal Excellency and Guiding Star of Socialism, the Great Kenyan Usurper Barack Obama.

Rep. Issa started releasing snippets of interviews with some IRS employees, but then changed his mind when Rep. Elijah Cummings (D-Badass) wanted to release entire transcripts.

Then it turned out that the guy at the IRS in charge of targeting conservative groups was a self-described conservative Republican. But that didn’t stop the crazies and their conspiracy, no siree. You can’t stop crazy; you can only hope to contain it by voting it out of office.

Except now we learn that the IRS was really just doing its job. Here is an excerpt from one of the BOLO (Be On the Look Out) memos, courtesy of NYT:

“Common thread is the word ‘progressive,’ ” a lookout list instructs. “Activities appear to lean toward a new political party. Activities are partisan and appear as anti-Republican.”

That’s right, Glorious Readers – the IRS targeted liberal groups who were trying to evade taxes, too. They were just doing their job, albeit trying to cut corners by targeting groups based on the words in their title. Seems that the IRS was trying to ensure that all groups – liberal, conservative, whatever – were playing by the rules. This seems to be exactly the type of behavior one would want from the IRS, except for the cutting corners part. Don’t do that anymore, k?

We were really happy to see the apology from Rep. Darrell Issa, about how wrong he was and how he personally called the President to make amends for being such a giant asshole. Haha, yeah right. Instead, per The Hill:

The House Oversight chairman, Rep. Darrell Issa (R-Calif.), added that it was “premature” for Werfel to say that there was “no evidence that anyone at IRS intentionally did anything wrong.”

Hahaha, Rep. Issa is worried that someone else is jumping to conclusions! We are pretty sure there is a word for that, but at the moment all that comes to mind is "fuck that guy."

So now we can expect the wingnutosphere to shut up about IRSgate, right? You know, like they have about Benghazi and Bill Ayres and Solyndra and Jeremiah Wright and the birth certificate and...