Is George W. Bush In The Tank For Crooked Hillary Clinton? We Are Just Asking. 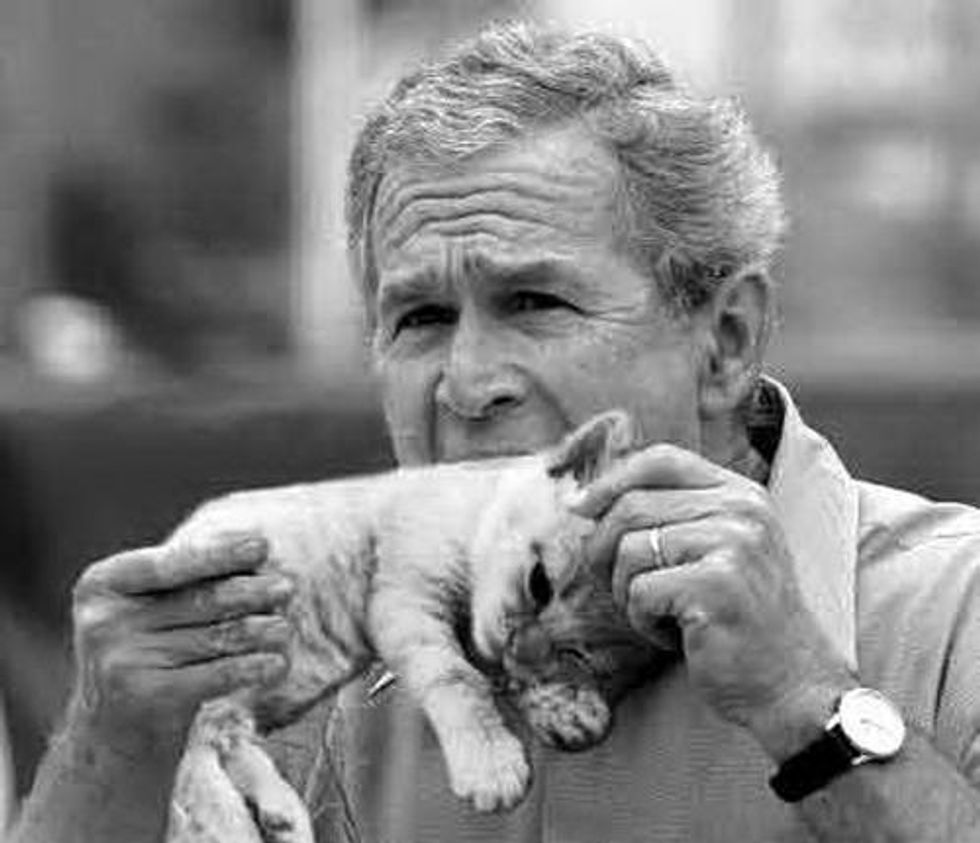 What? It's still a funny picture.

There are all these rumors on the internets right now that big shot Republicans are gettin' ready to say they are #NeverTrump, and SOME of them might even say that they are #ImWithHer. Is it true? We dunno, but maybe! It is some "big story" or something that former eBay CEO failed RINO Silicon Valley lady Meg Whitman is donating hundreds of thousands of amero-bucks to Hillary's campaign, and Tuesday we heard news of the first sitting Republican congressman, Richard Hanna of New York, to declare his support for Hillary. He's not running for re-election though, so eat a boner, RICHARD.

[wonkbar]<a href="http://wonkette.com/474034/george-w-bush-is-president-of-paintings"></a>[/wonkbar]But let's talk about our beloved (smirk) former president George W. Bush. Is he going to stop painting pictures of his nakey penis-dong in the shower and pull the lever for Hillary Clinton? We are just wondering, considering how he spoke at length at a Rob Portman fundraiser in Cincinnati about what a horrific douche-nipple Donald Trump is, without even once mentioning Trump's sad name:

Without naming Republican presidential nominee Donald Trump, former President George W. Bush delivered an incisive critique of his policies of “isolationism, nativism and protectionism” at a private fundraiser in Cincinnati on Tuesday for Ohio Sen. Rob Portman, according to four people who attended.

People at the fundraiser recalled that the former president said that Islamic women should come to the U.S. to experience a free society so they can lead the charge for equality in the Middle East. “He said everyone wants to be free,” said U.S. Rep. Brad Wenstrup of Cincinnati. “He really touched everyone in the room.”

Asked about the future of the Republican Party, Mr. Bush said, “As long as everyone feels welcome, I think we’ll succeed,” according to Mr. Wenstrup.

Gee whiz, we wonder what the former president, who was a very bad president but seems worthy of fucking Rushmore in comparison to the current GOP nominee, was talking about. Dubya doesn't like "isolationism, nativism and protectionism," and he wants the Islamic ladies to be free. Moreover, he wants everybody to feel welcome and get along! None of that describes Donald J. Trump, does it? In point of fact, it's all diametrically OPPOSED to what Trump wants.

[wonkbar]<a href="http://wonkette.com/601944/hispanic-voter-el-jeb-bush-appalled-by-donald-trumps-cinco-de-mayo-racisms"></a>[/wonkbar]The Wall Street Journal notes that none of the Bush family decided to show up at the Republican National Convention in Cleveland, probably because Barbara Bush forbade them and threatened to dutch oven any family member who defied her. And we all know Jeb Bush is still languishing in Sadness Land over how Trump was so mean to him, so it's not like he was gonna go.

Moreover, many former Bush administration officials have signaled that, even if they have to close their eyes, hold their noses and count to Jesus, they are probably voting for Hillary. We know Laura Bush, wife of Dubya, has wink wink nudged nudged about "the next president, whoever he OR SHE might be" (emphasis ours), so we feel comfortable saying she's #InTheTank.

And again, the thing with Bar and her allegedly notable habit of dutch ovening her family all the time (look, Wonkette wildly speculates about the former first lady's farts, you decide), which can just as easily be applied to forcing all her giant family to vote for Hillary. She has said it's "unbelievable" that women would consider supporting Trump, and we're guessing she's not about to vote-bang Jill Stein into office, so we're gonna call her #InTheTank, also.

So, what about the boys? Is Jebbers voting for Hillary? (Yes.) Is Poppy Snapchatting his support to Hillz? (Maybe!) Is Dubya going to quietly vote for Hillary and hope no journalist alive ever asks him what he did in that voting booth in November 2016?

He sure as shit will IF HE LOVES AMERICA.