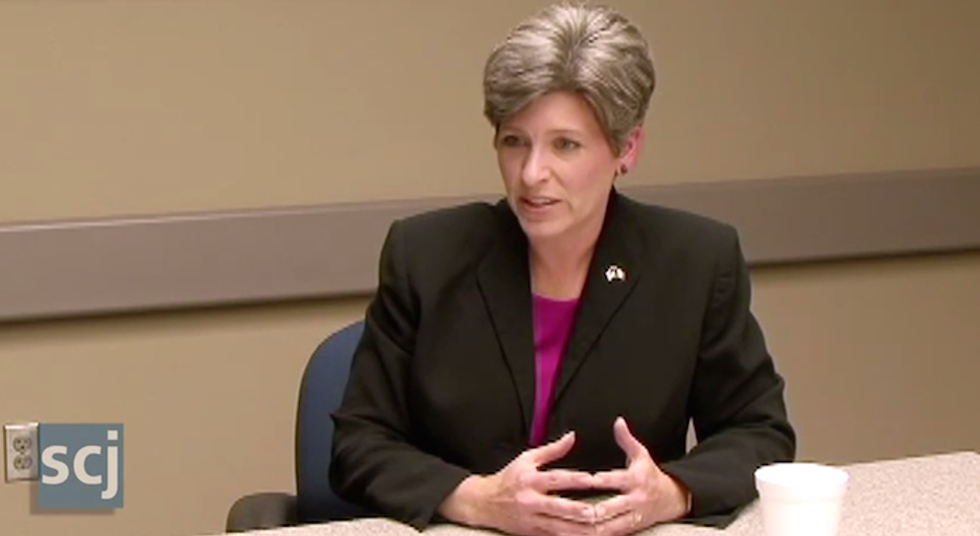 Iowa state Sen. Joni Ernst is definitely not the brightest belle in the drawer. She's hoping to get elected to the U.S. Senate on a platform of arresting the government for Obamacare, warning the rural folk about Agenda 21's plot to make them ride bicycles like common Chinese, and also something about castrating pigs.

So we are not exactly surprised that while she keeps insisting she does yes too care about women's health -- she's a woman, after all, unlike her opponent, Rep. Bruce Braley; he's not a woman, you know! -- when she was interviewed by the Sioux City Journal editorial board on Wednesday, and was asked whether she'd support a personhood amendment to the Constitution, she had this to say:

So yes, sure, she'd love to amend the Constitution to prohibit all women everywhere from having abortions or even using certain types of birth control -- that's what personhood amendments do -- but it's not realistic, so don't hold it against her, okay?

What I want to do is set the record straight, when it comes to contraception and access to birth control. I will always protect a woman’s access to reliable and affordable birth control. This is an issue that there should be no question about. I think women should have access to birth control, and I will continue supporting that. And I think it’s laughable that Congressman Braley is the one that’s lecturing me on this. I am a woman, and I have three beautiful daughters, and I just think when it comes to women’s issues, I have an edge on women’s issues.

Hahaha! Laughable, man. Braley isn't a woman, and he only has one daughter, for crying out loud, so how dare he lecture her on ... wait, what is it he "lectured" her about? Oh, right. In their debate in September, he "lectured" her about the personhood bill she introduced in the Iowa Senate in 2013, because she seemed to be very confused about her own proposed legislation. She said it would "not do any of the things" that Rep. Braley said it would do because it was "simply a statement that I support life."

Except that when we did our homework and read her bill, we discovered it was your standard boilerplate personhood bill, which isn't so much a simple statement of support as a deceptively concise way of legislatively eliminating all abortion rights protected under Roe v. Wade, which is exactly what personhood activists have said is the entire point of their movement. But potayto, potahto, right?

Braley might be a man, and he might not have three daughters, but he does seem to have a better grasp on what Ernst's bill would have done than she does. And if she really believes that a personhood amendment to the U.S. of America Constitution would have no legislative impact whatsoever, but would merely enshrine a "statement," what would be the point, exactly? Pretty sure amendments to the Constitution are actually supposed to do something, not just talk about feelings. Like, in a legal way. But aw heck, we are not pig castrators, so what do we know about constitutional law?

Ernst didn't stop there, though. Immediately after saying she has the edge on women's issues, what with being a woman and all, she seemed to dismiss the idea of women's issues completely.

"When’s the last time somebody came up to you and asked you about men’s issues? I mean, truly. Has anybody ever asked you that?" she asked the editor, who is a man, which makes the whole question very confusing because isn't she the one with the edge? Didn't she just say so?

"What’s a man’s issue?" the editor rhetoricized back at her.

"Exactly!" Ernst replied and laughed, like the whole thing was absurd. Which is actually fair and not incorrect. "Exactly. But we try and scare women by stating, this is a woman’s issue, and this woman is going to take away your access to contraception, which is completely untrue."

So. Ernst has the edge on women's issues, which are nothing more than vague political scare tactics to make other women think she supports legislation to restrict their access to birth control, which is "completely untrue" except for how it is completely true, because we just heard her say so.

We will give Ernst this: the term "women's issues" is a pretty dumb one because those issues politicians generally think of as chick stuff actually affect everybody. For example, Ernst (like any good Republican) wants to repeal Obamacare. That affects everyone, but it also especially affects women, who've been saving a tons of dollars (for SHOOOOOOZ!) thanks to the contraception mandate. Ernst says she doesn't want to take away anyone's access to birth control, but repealing Obamacare would do exactly that. But we're sure edgy Ernst has already thought of that, right? She is the woman in the race, after all.

Ernst spent a full hour with the editorial board, so she had plenty of opportunity to share some really neat things she'd do if she were in the Senate. That's why, in all of her ads, "we try and remain very positive, with a positive message." Guess that ad about how she will castrate D.C. just like the pigs back home was meant in a cheery positive way?

After giving a long boring answer to questions about whether she's too extreme, which she says she's not, of course, she then explains why she thinks it would be good to "eliminate or decrease" the Environmental Protection Agency. Not only because it would save taxpayers money (and no, she doesn't know how much, don't be ridiculous!), but because the environment would actually be better protected if there were no federal agency in charge of doing that.

Department of Education? Yep, that would go too because it would save the taxpayers lots of money as well, and the states don't need the federal government getting in their way. In fact, Ernst is pretty sure the federal government doesn't really serve any purpose whatsoever -- other than enshrining her "pro-life" beliefs in our Constitution, of course. But that's a real logistical hassle, so shhhhhhhh, let's not even talk about that.

You can watch the entire, excruciating hour-long conversation here, although castration would probably be less painful.