Is It Time For The Press To STFU About Hillary Clinton's Press Conferences? 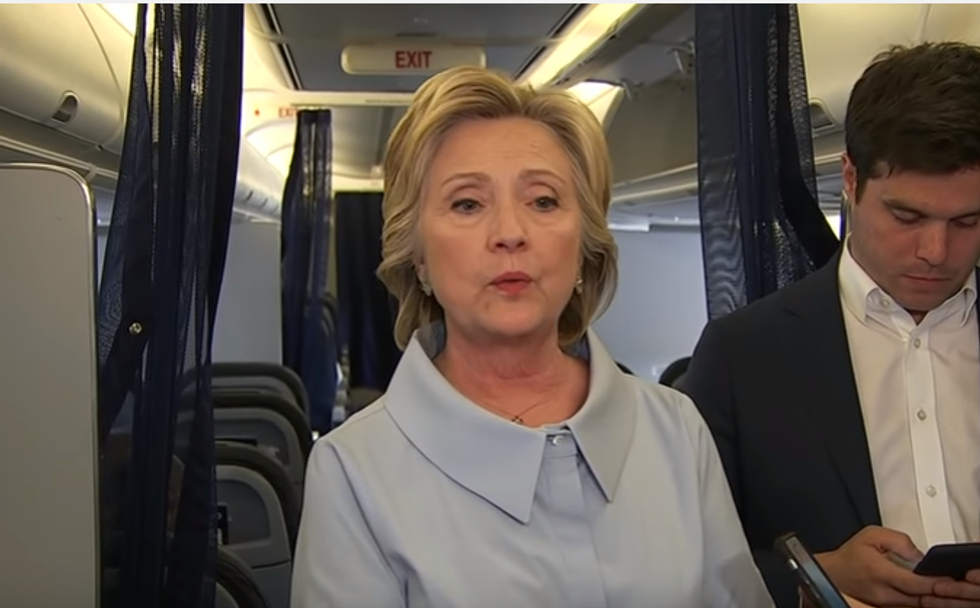 You can't see this pic of Hillary talking to the press, because she doesn't talk to the press.

There is a very stupid controversy happening right now, about whether Hillary gave a press conference on her aero-plane, or whether it was a press gaggle, and did Asshole Hillary even give the traveling press the correct flavor of ice cream sandwiches afterward? She did not. Has it been 275 days since Hillary gave a press conference, or has it just been a day and a half? This is an IMPORTANT QUESTION.

Hillary Clinton took questions from reporters aboard her campaign plane Monday, but seemingly more interesting than what she said is what to call the session in which she said it. Was it a news conference or something else — perhaps merely a "gaggle" or an "avail"?

Under different circumstances, this would be a silly, semantic argument, but the Democratic presidential candidate's lack of news conferences has become a campaign issue, with journalists complaining that she has not held one since last year, and Donald Trump's team attempting to brand her as "Hiding Hillary."

It's still a stupid semantic argument.

[wonkbar]<a href="http://wonkette.com/606297/hillary-clinton-hacked-up-lung-in-cleveland-and-nbc-news-is-on-it"></a>[/wonkbar]The Post explains that some wingnuts are saying no way, the thing on Hillary's plane was not a presser. For instance, Alex Jones's website says it doesn't count, because all she did was take softball questions, and then afterward died of coughing, LIKE SHE ALWAYS DOES. Townhall says OK fine, it was a "mini press conference," but it still doesn't count because of the coughing. Even Dead Breitbart had something to complain about, can you imagine that?

Look, it's Hillz, answering a question from a reporter, on the aero-plane -- which is bigger and allows for Hillary to actually travel with the press, as opposed to her old plane, which only had enough room for Hillary and Huma to make romance to each other, we guess -- about whether she gives a damn about all the silly conspiracy theories about her. Her short answer? Nah, fuck 'em.

So, this is just wingnuts whining like they always do, right? Haha, of course not, we're talking about Hillary! The Post notes that these complaints aren't "confined to the far right," and pastes a bunch of tweets from Serious Journalists mulling the question of whether it was a REAL press conference, a news conference, a gaggle, or GRRRRRR SHUT UP SHUT UP SHUT UP.

The Post comes to its conclusion, and issues a caveat:

For us at The Fix, Clinton's session on the plane was news conference-ish enough to reset our running tally. [...]

Whatever the right phrase to describe Clinton's Monday Q&A, the bottom line is journalists will only get off her back about this if — now that they can travel aboard her campaign plane — the candidate makes herself available for questions on a regular basis.

That's the Washington Post, 'splaining how Hillary needs to act if she wants to be treated right.

Can we note that the whole idea of having a running tracker of how long it's been since Hillary held a press conference comes straight from the irritated bowels of the Republican National Committee? (That's a broken link, by the way, to a GOP-published article about how it had been 272 days since Hillary held a presser. Guess the GOP thinks Hillary's Sexxxy Plane Chat was good enough, and has taken it down.)

[wonkbar]<a href="http://wonkette.com/605212/why-do-hillary-clinton-press-conferences-hate-white-people-so-much"></a>[/wonkbar]Can we also note that, even when Hillary does a real press conference, it's not good enough for the press? In August, Hillary addressed a joint convention of the National Association of Black Journalists and the National Association of Hispanic Journalists, and afterward, she took questions from those journalists, but that wasn't good enough, according to Very Serious Journalist Dylan Byers, writing at CNN:

Yeah, it didn't count because those were just minority journalists who don't even know how to ask questions good, and don't understand DEEP POLICY QUESTIONS the way the national press corps does. This should be self-evident, as we have all seen what an EXCELLENT job the national press corps has done covering the 2016 election, yeah buddy, that's right, LOL, keep telling yourselves you deserve your paychecks, you lazy fucks.

Byers also says the fact that Hillary does one million interviews -- more than Trump! -- doesn't count either, because REASONS.

AND ANOTHER THING! The media likes to bitch about Hillary being unavailable, but it simultaneously has this REALLY bad habit of ignoring Hillary, no matter what she's doing. This happened Tuesday on CNN:

That's been happening the entire campaign. The media will cut away so we can watch an empty podium where Donald Trump is going to speak, for ten minutes, while Hillary is giving a speech on, for instance, unions. In fact, a study out of Harvard found that the press spends far more time fawning all over what Trump is doing than it does covering Hillary's campaign, but that when they DO cover her, she gets FAR MORE negative coverage from the Very Serious Press than he does. Wonder why!

So, to answer the question in the headline, should the press STFU about this? The answer is YES, you petulant children. Hillary will answer your obviously hard-hitting questions when she gets the fuck around to calling your name.