Is Putin Spreading Ebola? Sure Why Not 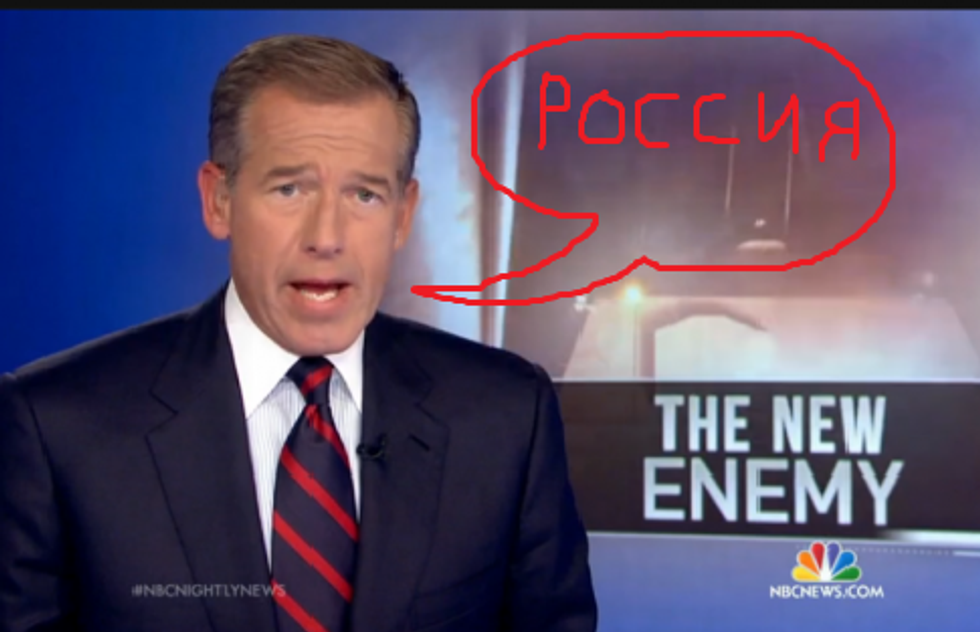 With Ebola now killing 0.000001% of Americans who might have otherwise died naturally from self-inflicted gunshot wounds, diabetes, car accidents or no-knock, wrong-condo SWAT raids,The Washington Post has bravely asked what you are already thinking deep within your sub-subconscious: Isn't this Russia's fault, somehow? Your intrepid Russia correspondent will now confirm what is plainly obvious.

We won't dwell on this hard-hitting morsel of shoe-leather journalism for too long, but why is there an American flag waving proudly in WaPo's scary photograph of a Top Secret Siberian Ebola-Bomb Factory?

Actually, the subtlety at play here is much more sophisticated than the usual word salad typically tossed by our friends at the Post. Instead of “Putin shot down MH-17 with an Ebola rocket,” they've gone with something a bit more finespun:

At a time when the world is grappling with an unprecedented Ebola crisis, the wall of secrecy surrounding the [Siberian Institute for Spreading Ebola] looms still larger, arms-control experts say, feeding conspiracy theories and raising suspicions.

Your correspondent would like to take this opportunity to reassure you that the Russian Federation is doing everything it possibly can to spread Ebola everywhere.

More deserving of our attention and admiration is Ben Judah's recent bombshell for Politico, “Disgraced Ex-Foreign Minister of Poland Told Me Fairy Stories About Vladimir Putin, Recanted – Published Them Anyway Because I'm a Callous Ideologue.”

Judah's primary source for his latest Putin exposé was none other than Radoslaw Sikorski, the “colorful” Polish ex-diplomat (ex because he was fired for incompetence) who once jested that Barack Obama's grandparents were Godless cannibals. And as you might imagine, Sikorski had a racist fartbox full of steamy Putin scoops, which Judah greedily gobbled up.

Try and guess what happens next.

According to a very carefully worded Reuters article, Sikorski “mis-remembered” when he told Judah that:

Russian President Vladimir Putin had proposed that Warsaw and Moscow occupy Ukraine and divide it between them.

In an interview with U.S. website Politico dated Oct. 19, Sikorski said that Putin had made the proposal to Donald Tusk, who at the time was Polish prime minister, during a 2008 meeting between the two leaders in Moscow.

"There was an over-interpretation in the text and my memory failed me, because after a check it was revealed that there was no such meeting in Moscow between Tusk and Putin," said Sikorski, who served until last month as foreign minister.

"It's natural for a human being to get ahead of oneself and this was the case here."

We've all mis-remembered things that Vladimir Putin never said at meetings that we did not attend and actually never took place. To mis-remember is to be human. But the question remains: How exactly did this tall tale make it to print? Isn't there a urine-stained corner in every newsroom where an unpaid intern Facebook-pokes sources, meeting dates, provocative allegations, and so on -- what industry insiders call "fact-checking"?

The short answer to this troubling question is: "It's Politico." The slightly longer answer: "It's Ben Judah writing about Putin, for Politico." As of Monday, Oct. 27, 13:41 Permanent Winter Time, Politico has yet to make any corrections or amendments to Judah's fan fiction. Don't cave in to reality, Politico -- stay the course.

We shall end this nightmare-saga by reminding our dear readers that Radoslaw Sikorski is married to famous guano faucet Anne Applebaum, the WaPo wordsmith who over the years has crafted such literary delights as “Prepare for War with Iran”, "Should We Assassinate Saddam?" and our personal favorite: “A Preemptive Strike Against Muslim Extremism in Switzerland.” When Applebaum isn't busy blaming Muslims for her toe corns, she writes about the looming Red Menace and other deep thoughts.

Let's move on to the next agenda item.

In order to thwart homosexual conspiracies, Russia announced this month that it would end its long-standing student exchange program FLEX (Future Leader Exchange) with the United States.

To find out more, we spoke with "Ruslan," who lived for one year in Ohio as a FLEX-er. Ruslan now studies at Moscow State University of International Relations, which means that he is smarter than you. Here are some questions and answers:

WONKETTE: Russia has axed its participation in FLEX, for reasons which are both unclear and strange. Is this a great loss to young, overachieving Russians such as yourself?

Ruslan: Yes. The program really helped me to finally decide what I want to do in my future career, and it's great to know that on the other side of the world there are people who still care about me. Fun fact: the nephew of my host-mom wants to major in Russian studies (I don't know if he still wants to do it, but the fact that he got so interested in me and my culture is pretty amazing).

W: Do you think FLEX is important for maintaining not-totally-insane relations between the US and Russia?

R: FLEX is extremely important for Russia because usually the State Department manages to select the future intellectual elite of Russia (sorry for sounding pompous), and of course nobody who has lived with an American family would later in his or her career be hostile towards the US, and the same can be said about the Americans who interact with Russian students from the program. The Americans I befriended now have more critical views of how Russia is portrayed by the media.

W: If you read between the lines, the Russian government seems to think that the program is used to indoctrinate impressionable young Russians.

R: Most FLEX alumni stay in Russia and study at the best Russian universities. Also when students come back they describe America realistically, saying, “Yeah America has some awesome stuff, buuuuuut there are a lot of problems, just like in Russia” -- they realize that the US is not a paradise.

W: People – and by people, we really mean “Americans” – perceive life in Russia as a never-ending Human Rights Watch reality television series; no free press or freedom of speech, persecution of political opponents and sexual minorities, and so on. Do you think this is a fair characterization of contemporary Russia?

W: Did you feel more “free” while living in Ohio?

R: I'd say yes, but only on a personal level. Americans aren't very inward-looking and are very much attached to the idea that they are “free” – so they don't see their own problems like human rights violations, racism, poverty, drugs, etc. In Russia there's no such assumption about “being free,” so people see things more impartially I guess. So on that level I feel more free here in Russia.

W: Спасибо for your time.

Riley Waggaman is “America’s most trusted cub reporter,” according to Vanity Fair. He is not a reporter and he does not live in America. He can be reached at riley.waggaman at gmail dot com.