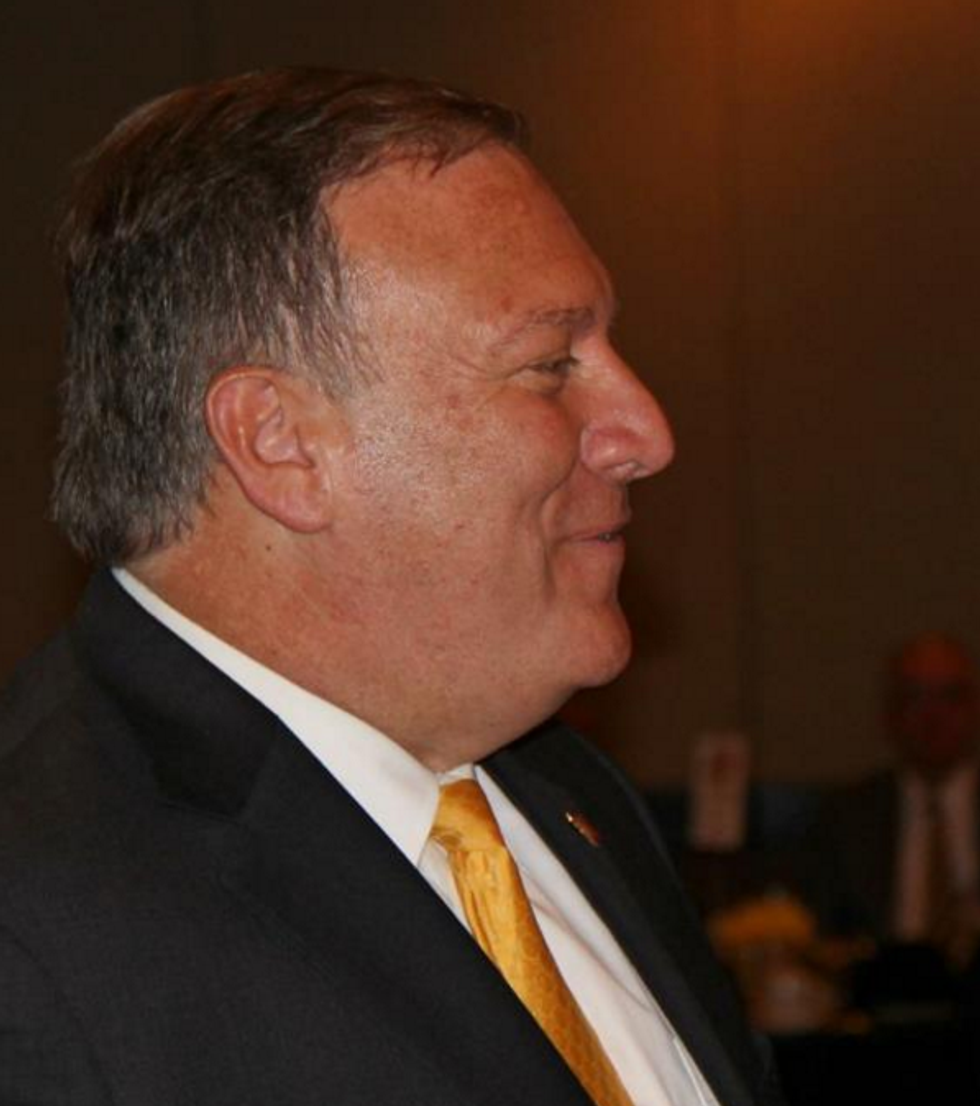 Rachel Maddow has been highlighting an interesting person the past few weeks, somebody we haven't heard much about in the matter of the Trump-Russia scandal/crisis/criminal investigation, and that person is CIA Director Mike Pompeo. Donald Trump plucked Pompeo from his 15 minutes of fame on the House Select Committee on Benghazi and installed him at the CIA, but despite how Pompeo is one of the highest ranking intelligence officials in the nation, his name doesn't come up much in the investigations into Trump's possible Russian collusion or obstruction of justice. What gives? Is he just a totally boring and innocent Kansas cowpoke, jes' doin' his job over at the CIA, where they installed him a nice telly-phone with a ringer that goes "MOOOO!" like cow, so he feels at home? Or does he know something? Is this one of those situations where the longer they wait to subpoena your ass, the more likely it is you're a target of the investigation? We just don't know!

The New York Times broke news Tuesday night about how -- during the window of time when literal actual foreign agent Michael Flynn was national security adviser, AFTER then-acting attorney general Sally Yates started yelling at the White House about how Flynn was a literal actual foreign agent at risk of being blackmailed by the Russians for lying about his meetings with the Russian ambassador, but BEFORE Flynn was YOU'RE FIRED by Trump -- CIA Director Pompeo was ready, willing and able to share the nation's top intelligence secrets with Flynn, during the president's daily briefings:

At the F.B.I., the C.I.A., the Justice Department and the Office of the Director of National Intelligence — agencies responsible for keeping American secrets safe from foreign spies — career officials agreed that Mr. Flynn represented an urgent problem.

Yet nearly every day for three weeks, the new C.I.A. director, Mike Pompeo, sat in the Oval Office and briefed President Trump on the nation’s most sensitive intelligence — with Mr. Flynn listening. Mr. Pompeo has not said whether C.I.A. officials left him in the dark about their views of Mr. Flynn, but one administration official said Mr. Pompeo did not share any concerns about Mr. Flynn with the president.

WTF COULD GO WRONG? Sally Yates had, again, been warning the White House that Flynn could be blackmailed by Russia, so Trump can't claim ignorance. Of course, we still believe sharing highly classified intelligence with the president is a national security risk in and of itself, and Trump proved us right when he prematurely ejaculated sensitive intelligence procured by Israel with his Russian buddies IN THE FUCKING OVAL OFFICE.

So! Pompeo may or may not have been aware of the assessment of career intelligence officials, that Michael Flynn, literal actual foreign agent, was a literal actual danger to the republic. The NYT reports that last month, he couldn't/wouldn't answer questions about that when senators asked him. BUT MAYBE HE DID KNOW. According to Anonymous Administration Official, if Pompeo knew, he sure didn't tell Donald Trump. To be fair, Trump's reaction to such news would probably be, "Flynn's compromised by the Russians too? What are the odds of this thing happening to every person I ever meet? They have a pee hooker tape on me (ALLEGEDLY)! What kind of fetish sex did they wire tapp Flynn doing?"

Anyway, it sounds to us like it's time for the CIA director to have his ass hauled into Robert Mueller's office!

We started this post saying Rachel Maddow has been using her investigatin' stick to poke at the Mike Pompeo story, so here are some videos. This first one is about the NYT report that came out last night:

In this second video, Rachel looks at a weird, overlooked detail from a story we already knew. Remember how in March, there was a briefing at the White House, which according to the Washington Post was attended by Director of National Intelligence Dan Coats and "officials from several government agencies"? The WaPo reports that after that briefing, Trump asked Coats to stay behind, along with Guess Who Else? That's right, it was Mike Pompeo! This was reportedly when Trump tried to grab the elderly Coats by the pussy and lean on him to intervene in the FBI's Michael Flynn investigation. Isn't that weird how Mike Pompeo was in the room? Shouldn't Robert Mueller and a bunch of Senate committees be interested in talking to Pompeo about what he witnessed right then? Did Trump also try to grab Pompeo by the pussy? Or was Pompeo Trump's little pussy-grabbing helper with Coats? Oh goodness, we are just asking questions about a person who hasn't yet been subpoenaed for some reason!

Rachel reports that the Senate Judiciary Committee is INDEED curious, and that senators Chuck Grassley and Dianne Feinstein sent Pompeo a letter inquiring as to what he knows about all this and when he knew it. They wanted a response by June 9, which was 12 days ago. Guess who hasn't responded to the letter? HMMMMMMMMMMMMM YOU'LL NEVER GUESS.

In conclusion, we are going to guess that Mike Pompeo is deeper in this than anybody knew, unless he isn't, in which case he needs to be a patriotic fucking American and say so. Fair?