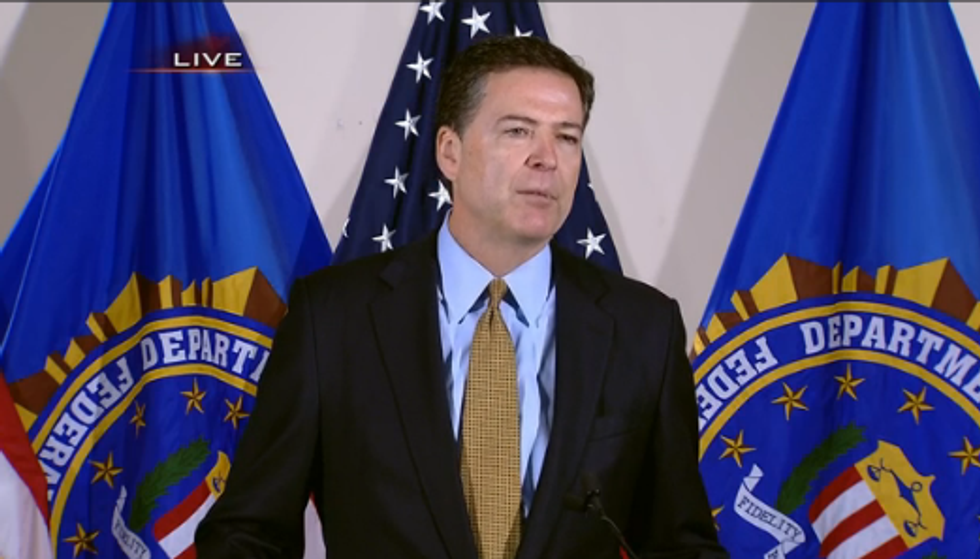 We guess we won't get to use these sexxxy pictures that much longer.

OK everyone, what do we do now? Donald Trump has fired FBI Director James Comey because Trump is a shithead tinpot dictator wannabe who thinks he's above the law. Trump didn't like how Comey was investigating his Russian connections (and apparently asking for more resources for that investigation just ONE WEEK AGO), and he really didn't like it how Comey wouldn't support Trump's stupid lies about how Barack Obama put "wire tapps" in the president's flaky asshole.

Well, it sounds like the Russia scandal needs an independent prosecutor! That's what all the Democrats are calling for, and we agree. Deputy Attorney General Rod Rosenstein, as we wrote earlier today, has chosen to play the "Bork" role in this scandal by rustling up a bullshit letter at Trump's behest about why Comey should be fired, and therefore has lost all credibility. Tough break for an allegedly nonpartisan guy who's only been sworn in for 14 days!

There are several processes for appointing a special prosecutor, or for Congress to establish an independent commission. Read about them here! And there are a lot of things Democrats AND Republicans in Congress can do to take bold action against Trump's petulant behavior right now. Read about those here!

But in this post, we want to briefly highlight a few halfway decent Republicans, in both houses of Congress, who are at the very least "disturbed" by Trump's actions. Some of them are actually calling for a special prosecutor or an independent commission! While Senate Majority Leader Mitch McConnell is being a power-hungry turtle whore and rejecting calls for an independent prosecutor, and while Lindsey Graham is just generally being a pissy pain in the ass, there are Republicans out there who could play an important part in this, especially if their constituents push them to be fucking patriots and put country above party.

Let's start with Senator John McCain of Arizona, who has been calling for a select committee to investigate Trump and Russia for a while now. McCain issued a statement on the firing, but the Washington Post reports he made other comments Tuesday night that were harsher:

“This scandal is going to go on. I’ve seen it before,” McCain told a meeting of the Munich Security Conference core group. “This is a centipede. I guarantee you there will be more shoes to drop, I can just guarantee it. There’s just too much information that we don’t have that will be coming out.” [...]

“I remember the Saturday Night Massacre,” McCain told the mostly European and American guests, referring to the 1973 incident when President Nixon fired the special prosecutor looking into the Watergate break-in, Archibald Cox. [...]

“I regret it, I think it’s unfortunate,” McCain said. “The president does have that constitutional authority. But I can’t help but think that this is not a good thing for America.”

John McCain remembers the Saturday Night Massacre well! It was his 68th birthday, and he had just had a lovely dinner at the Luby's Cafeteria, thanks to a sexxxy discount on his AARP card. Afterward, he stopped by the Walgreens to pick up prescriptions and butterscotches, but then all of a sudden it was like WHOA HEY SATURDAY NIGHT MASSACRE WHOA HEY! All the butterscotches melted.

Sorry, that was just us making fun of John McCain for being old for LITERALLY NO REASON, and this is a very serious post.

Let's move on to Senator Jeff Flake, also of Arizona:

Senator Ben Sasse of Nebraska said "the timing of this firing is very troubling" and he's demanding answers. And then there's Senator Richard Burr, the chair of the Senate Intelligence Committee:

“I am troubled by the timing and reasoning of Director Comey’s termination. I have found Director Comey to be a public servant of the highest order, and his dismissal further confuses an already difficult investigation by the Committee. In my interactions with the Director and with the Bureau under his leadership, he and the FBI have always been straightforward with our Committee. Director Comey has been more forthcoming with information than any FBI Director I can recall in my tenure on the congressional intelligence committees. His dismissal, I believe, is a loss for the Bureau and the nation.”

Burr doesn't think we need a special prosecutor, because he's just real confident his committee can still do a good job, to which we reply YEAH RIGHT, DUMB BABY.

Several Republicans in the House have also expressed misgivings, like Justin Amash of Michigan:

(The second paragraph is the one where Trump, in a casual non sequitur, thanked Comey for allegedly saying Trump isn't under investigation. It IS bizarre. Rebecca's supposition is that Comey told him, "no dude, you weren't wiretapped," and Trump thought that meant he wasn't being investigated, because he is fucking dumb.)

Rep. Charlie Dent of Pennsylvania said on MSNBC on Wednesday morning that "It is now harder to resist calls for an independent investigation," and Rep. Barbara Comstock of Virginia issued the following statement:

And finally, here is Joe Scarborough, who used to be a Republican congressman, but who is now co-host of MSNBC's popular news program "Giggle Giggle Mika Pinched Me!" He's had a few things to say about this, both on TV and on the Tweeters. This is just an example, but literally read his entire Twitter feed, because he's going apeshit at his fellow Republicans:

So! To wrap up this post, if you have Republican senators or congresspeople representing you, did you see them in this post, being vaguely good? If not, check and find out what they've had to say about this. If they're being semi-good, call them on the phone and be encouraging as you demand a special prosecutor! If your elected Republican official is NOT being good, then CALL THAT FUCKER AND YELL AT IT.

If you need their phone numbers, start right here.