charles krauthammerpt it's not a lie if you believe itsequesterwashington post 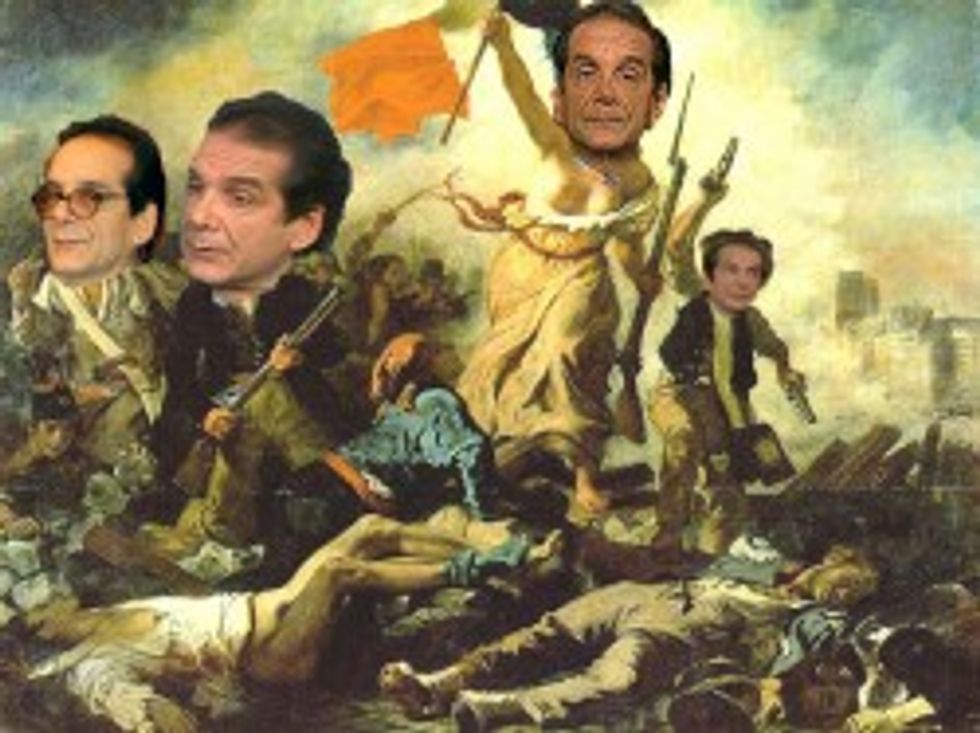 A guest post from your compatriot Alex Ruthrauff, aka "Sheriff Joe Biden." Charles Krauthammer is known to many Americans as a roasted chicken perched atop a can of cheap domestic beer. He has a lucrative job writing untrue things about important topics like politics, war, economics and history in order to prevent too many people from becoming informed.

Charles Krauthammer’s most recent thing he wrote for money goes on and on about how Obama is now “dead in the water” because he is a loser, for example sequester, immigration, terrorists, guns, etc. OK, while these are surely disputable assertions, they aren’t false per se. What’s going on here?!

“Bureaucrats were instructed to inflict maximum pain from minimal [sequestration] cuts, as revealed by one memo from the Agriculture Department demanding agency cuts that the public would feel.”

This is really great because basically no effort is required to figure out that it’s pure bullshit. All you have to do is click on the citation link, which is not really a citation because the definition of “citation” is not “a thing that reveals you are completely full of shit.” Anyway here’s what it says:

During the Management team conference call this morning, I asked if there was any latitude in how the sequestration cuts related to aquaculture could be managed (e.g. spread across the Region).

The question was elevated to APHIS BPAS. The response back was, “We have gone on record with a notification to Congress and whoever else that “APHIS would eliminate assistance to producers in 24 States in managing wildlife damage to the aquaculture industry, unless they provide funding to cover the costs.“ So, it is our opinion that however you manage that reduction, you need to make sure you are not contradicting what we said the impact would be.”

I have been asked to provide a plan by Friday that will outline the implement of the $263,000 aquaculture reduction. I will use the information you have already provided. If I need additional information, I will let you know.

(Then there’s Charlie’s office telephone number, which we are sure Charlie is just thrilled about.)

To recap, this banal interoffice email—the clear purpose of which was to make sure the USDA is doing a thing it has told Congress and the public it’s going to do—is the sum total of Charles Krauthammer’s evidence that “Bureaucrats were instructed to inflict maximum pain from minimal cuts.” If the Marketplace of Ideas were an actual marketplace, Charles Krauthammer would be selling dogshit and carpet tack pies. And making BANK.

Oh well! At least it was fun to imagine Obama bellowing “Inflict maximum pain!” at some terrified functionary while Biden gives himself a tattoo.