It's A Nice Day To Kentucky Marry Your Gay Homosexual Lover! 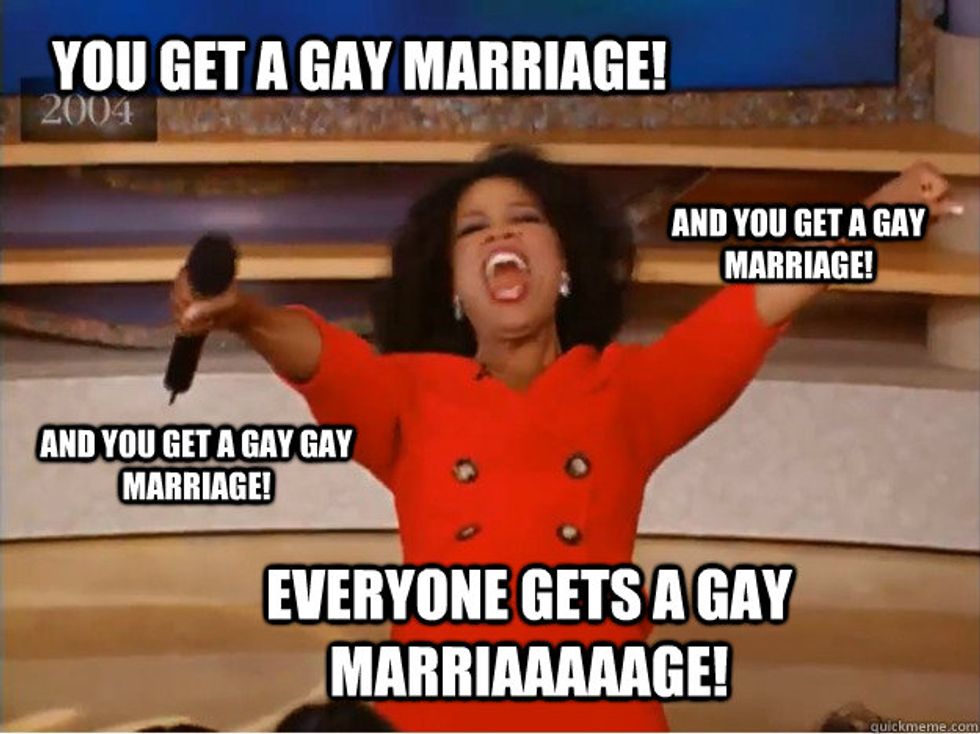 New county clerk much nicer than the last.

Yr Wonkette loves stories with happy endings, and yr Wonkette loves getting married! You know that thing that Editrix Becca did, when she Montana-married her heterosexual lover? Well, due to how SOMEBODY is currently doing a little jail time for being a very bad girl, gays are Kentucky-marrying their homosexual lovers in Rowan County today! Is there pizza? PROBABLY.

Here's some video of Will Smith (not THAT Will Smith) and James Yates, the first couple to get a marriage license in Rowan County Friday. They are NOT the same couple from this video, this is a DIFFERENT couple who's been harassing Kim Davis for the last six weeks:

And here's a tweet sent out by the Herald-Leader, showing the couple all happy and emotional and touching each other in the gay way, IN KIM DAVIS'S OFFICE:

And here's another one, of them hugging and crying, it's like these guys actually are madly in love and devoted to each other and not just Satan's minions trying to lead poor Kim Davis into temptation, HUH!

Awwwww! We hope many happy things for them after they go officially get gayed to each other!

Now, not ALL the deputy clerks in the office are giving out licenses. You see, Kim Davis's son Nathan works there, and he's like "MOM SAID I CAN'T!" and "LAWYERS SAID I CAN'T!" but meh, fuck him, the other five deputies are doing it. Nathan is free to cover his eyes when there are marrying homosexuals in the vicinity. Or he could do a little research on the Liberty Counsel, the law firm that's pushing his mom and him into acting like this, and find out how often they lose and how little they actually care about their clients. Maybe that might change his mind.

Speaking of, are you craving updates on the jailbird Kim Davis? Well, aside from how we've heard rumors that she's the leader of a new prison gang called the Lady Jumpers (because they're ladies, and they jump people, wearing lady jumpers!), there's not much. Here is her mugshot:

She looks about the same!

And lest you think this is all getting her down, you should know that her fourth husband Joe (who is the same person as her second husband Joe, we know, it's confusing) is out in the civilian world, fighting for his wife. In fact, he's got FIGHTIN' WORDS for that George W. Bush-appointed godless liberal judge what put his lady in the slammer: "Tell Judge Bunning he’s a butt." YEAH THAT'S RIGHT. And a poopyhead and a stinker and ... and ... and ... AND A FART!

Welcome to Sodom and Gomorrah to you, too! We hope you enjoy your stay!

Oh, and there are also still some other bigots outside holding signs. This one is pretty funny:

Oh, and you should know the Westboro Baptist Church says Davis is a godless fag-enabler. Take that, Kim Davis, you're Doing Martyrdom or whatever, but you're still not good enough for the God Hates Fags crowd!