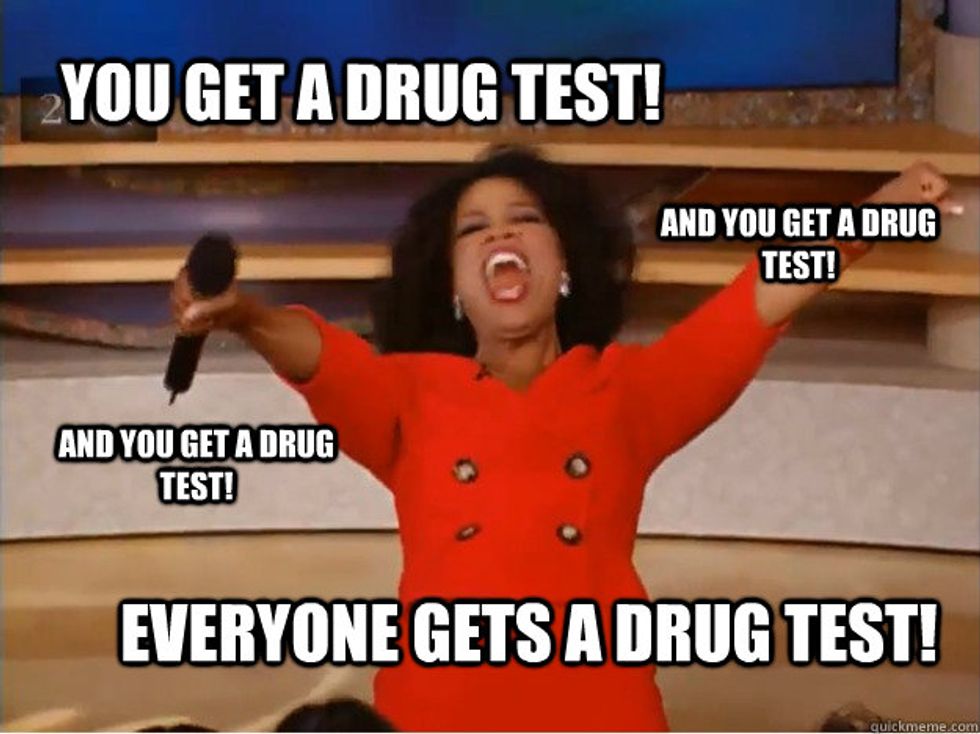 Move over, Tennessee,Florida, and several other states, and make room for Michigan on the Stupid Conservative Ideas bench, because the Great Lakes State is now the latest place where drug-testing people on welfare has failed to find any actual drug fiends on welfare.

In a pilot program, not a single person out of 303 welfare recipients or applicants has tested positive for drugs, which can't possibly be right, because doesn't everybody know that welfare poors are all on drugs?

The Michigan program began last October and covers Allegan, Clinton and Marquette counties. As of May, a total of 303 applicants and recipients for the state’s Family Independence Program, which provides temporary cash assistance, have participated in the pilot program. Zero have tested positive, the state said. When the program concludes, the state department of health and human services has 60 days to produce a report on its results.

Congratulations to Michigan for doing a pilot program before imposing it statewide -- if we know our Republican governors, we won't be at all surprised if Rick Snyder decides the experiment simply wasn't thorough enough and demands another try. Yes, we'd love to be proven wrong on that.

[wonkbar]<a href="http://wonkette.com/598520/rick-snyder-gave-his-wife-this-extra-fancy-birthday-cake-without-a-bit-of-lead-in-it"></a>[/wonkbar]The program is scheduled to run through September 30, so maybe they'll find at least one or two positive tests by then in the three counties where it's operating. A spokeswoman for Snyder said he would hold off on commenting until the end of the pilot program, by which time maybe the state can rustle up some drug fiends on welfare. It was also not clear whether Snyder is willing to submit to a test to detect traces of lavish custom-made birthday cake in his bloodstream.

Negative test results like these are awfully inconvenient for the Piss-Test The Poors crowd, especially given the recent attention to Wonkette's new favorite congresslady, Gwen Moore from Wisconsin, and her proposal to require drug tests for anyone claiming over $150,000 in itemized deductions. Rich folks don't want to pee in a cup to prove they're worthy of a government handout? Fine, they can take the much smaller standard deduction and keep snorting their rich people drugs. Just not on our dime. Moore introduced the federal bill in response to endless proposals by Republicans -- like Wisconsin Gov. Scott Walker -- to require drug testing for welfare or food stamps, even though the testing is invariably costly and never finds more than a few applicants using drugs.

But back to Michigan, which still hasn't seen fit to fix the water system in Flint, but is happy to require people to take a piss test if they want their welfare pittance. This is at least the state's second attempt at drug testing welfare applicants:

In 1999, the state implemented a pilot program to randomly test welfare recipients across the state. It ended after five weeks when a judge found the program to be unconstitutional.

Only 21 of the 268 individuals subjected to a test under the randomized pilot program yielded positive results for drugs – about 8% – with all but three for marijuana.

After that program went down in flames thanks to an ACLU lawsuit, the state continued with drug tests, but only when there were reasonable suspicions that recipients were using drugs, under the terms of a 2003 settlement. So why the renewed effort to test more? It's politically popular, and almost nobody has ever lost votes by shaming poor people.

The state even knew, going in, that the pilot program was unlikely to turn up a lot of welfare queens on drugs:

[The] nonpartisan Senate Fiscal Agency noted in its analysis of the Michigan program at the time it was passed: “The percentage of welfare recipients who use illegal drugs is similar to -- and only slightly higher than -- the percentage of drug users among the rest of the general population.”

Yeah, but they're using government services that nobody thinks they deserve, so isn't it worth it to give them one more hurdle to jump over, so they'll be shamed into not being poor? That's what gets people out of poverty, we hear.