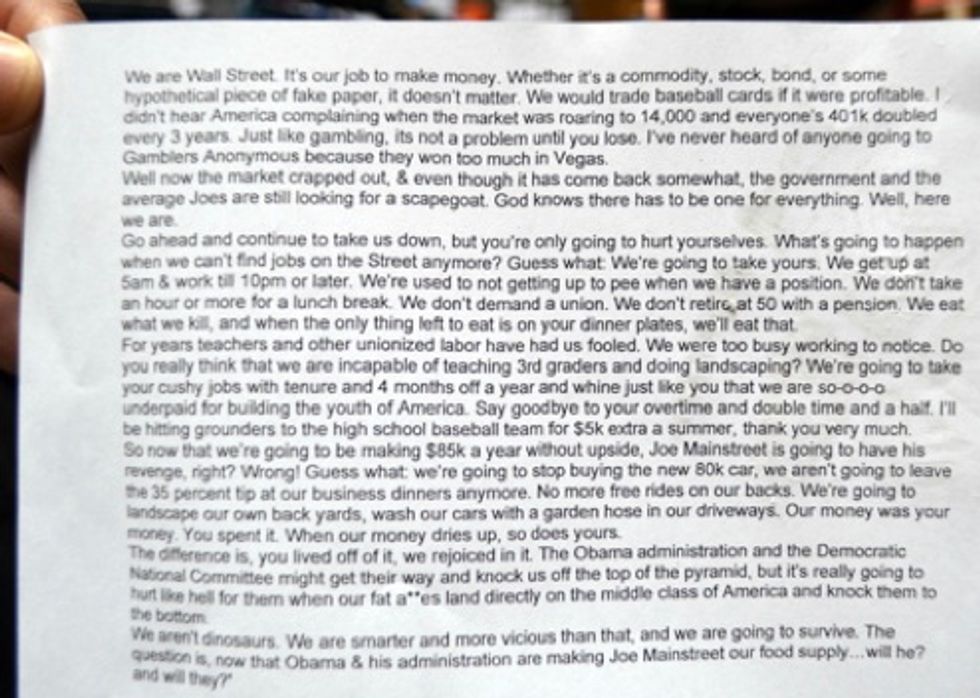 Last week the smug oddballs at the Chicago Board of Trade were dumping cryptic leaflets on the Occupy Chicago protesters mysteriously proclaiming with all the rhetorical precision of Chuck Grassley's Twitter feed to be the "1% paying for this." But one turd floating in the swimming pool is never enough, right?, so our anonymous chicken shit trader is back loosing a whole stream of word-diarrhea threatening to eat elementary school teachers and leave bad tips at restaurants. Yikes. Cocaine is not breakfast food, children!

You do not actually need to understand economics to be a trader, which is presumably with this nervous little feces-flinger's limited imagination of all the other employees in America consists of workers who mow his lawn and wash his fancy car, and, apparently, evil teachers snuck in there somehow (thanks, Wisconsin!).

Back in "reality," the relentless march of income inequality fueled by decades of increasingly shitty wages, the breakdown of unions, decimated retirement funds, rising health care costs, blah blah blah have forced all-time high numbers of people to seek public assistance in spite of spending entire lifetimes working the same grueling long hours -- Americans lead the world in labor productivity -- that this douche bag trader believes he and he alone works for all his precious monies.

A record 49 percent of Americans live in a household where someone receives at least one type of government benefit, according to the U.S. Census Bureau. And 63 percent of all federal spending this year will consist of checks written to individuals for which the government receives currently no services, the White House budget office estimates. That’s up from 46 percent in 1975 and 18 percent in 1940.

Right. NOTHING TO SEE HERE, MOVE ALONG. [Raw Story/ Bloomberg]