James Inhofe: Don't Extend Unemployment Benefits, Because God Is in Charge Of Climate Change (Which Is Fake) 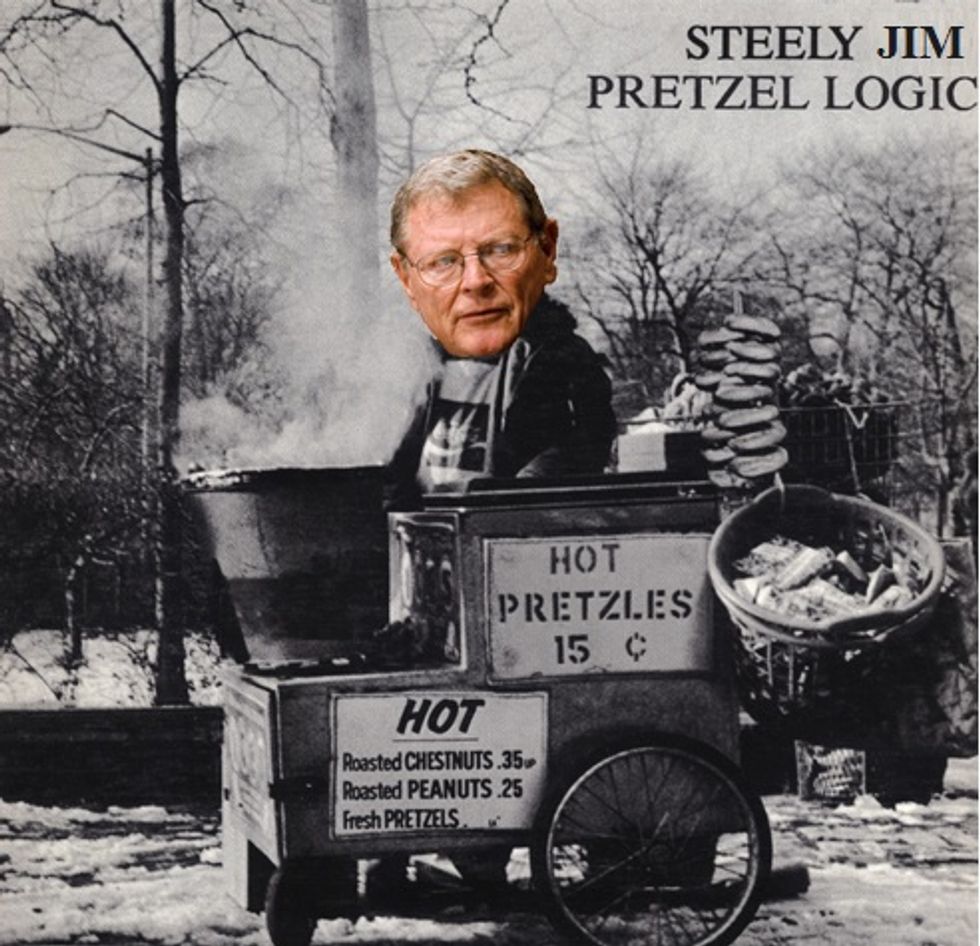 Listen up, heathens. Oklahoma Sen. James Inhofe just needs toexplain a thing or two to you people who think we need to extend emergency unemployment benefits that ended December 28. He has just two words that explain why we don't need to do that: Polar Vortex.

It's easily the best cryptic advice since that one guy told Anne Bancroft's little boy-toy "Plastics." For that matter, we bet Inhofe is big on those, too.

But let us just untangle this a bit. During Senate debate on extending the benefits, Inhofe said that the whole debate was missing the point, because Baby, it's cold outside:

“It is a little bit humorous to me that we are talking about extending unemployment benefits in the midst of one of the most intense cold fronts in American history,” he said on the Senate floor. “I saw one newscaster yesterday who said: If you are under 40, you have not seen this stuff before. It has to make everyone question -- and I am going to tie this together -- whether global warming was ever real.”

Now you see, this may sound like one of those things where China's butterflies are conspiring to cause hurricanes in the Caribbean, but it is far simpler than that. To get right to the nitty, what happened is that we have a slow economy because Barack Obama has increased onerous regulations on businesses because of all this phoney-baloney "global warming" nonsense, which cannot possibly be real because it is snowing this week, did you even notice how it is snowing and cold? And all those unnecessary regulations cause unemployment.

“That is what makes global warming so important to mention as we debate the extension of unemployment benefits. If we want to improve our employment figures, what we need to do is stop the onslaught of environmental regulations that have come out during this Obama presidency.”

So. If you want to help people whose unemployment benefits have expired, you do not restore those benefits, because that is like putting a Band-Aid on a wound, and Band-aids do not work, not even for bleeding (And if someone is bleeding, you should tell them to stop having impure thoughts, which upset the bodily humours). Instead, what you need to do to solve unemployment, if you look at this using pure logic, is to abolish the EPA, QED.

Also, too, you see, there are many cycles of global warming and cooling, and Inhofe knows who is in charge of these. It is very definitely unrelated to CO2 emissions, because trees breathe CO2 and Al Gore is a bad man. No, there is again a far more scientific explanation:

“Let’s go back. When you look back in history, and you look at these cycles, you have to come to the conclusion that God is still up there ...

“Well, what is happening now… it is now to the point where that has reversed and we are going into another one of these [cooling] cycles.”

Far be it from us to lecture a U.S. Senator on science, but the actual term for what is happening right now is "Winter," which no one ever claimed would be cancelled altogether by climate change. (More extreme weather events regardless of season -- that is something that climatologists have been predicting.) We also look forward to reminding Senator Inhofe of his comments when Oklahoma dries up and catches on fire next summer -- but that will probably just be divine anger at gay marriage.

Follow Doktor Zoom on Twitter. If you don't, Elizabeth Warren will lose her car keys -- it's just logic.