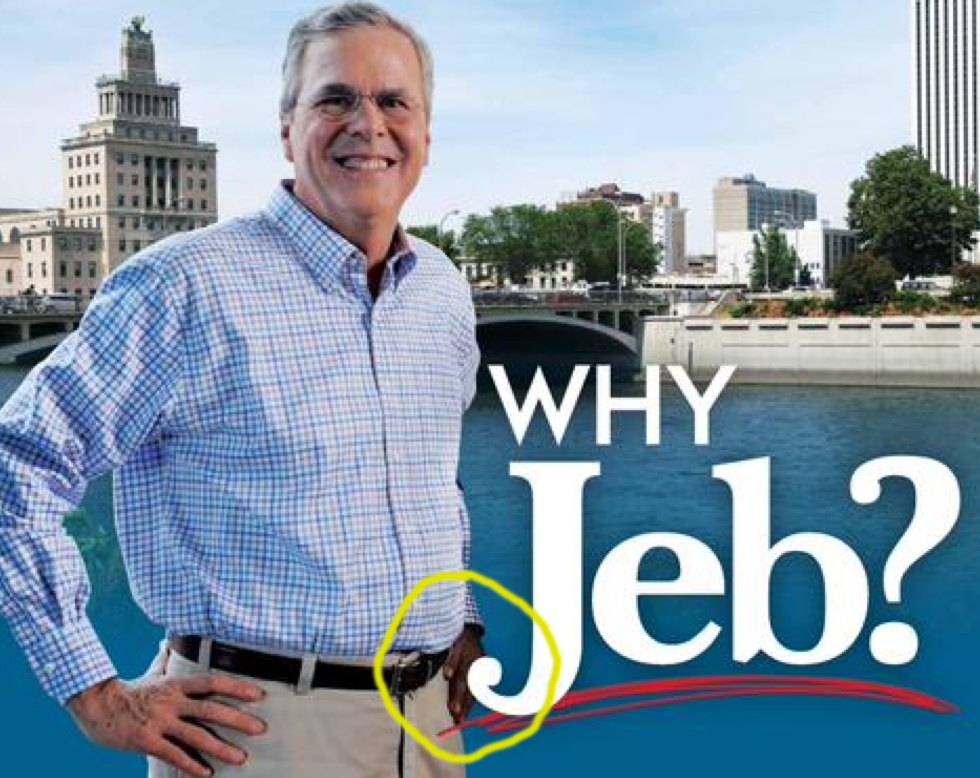 It was right there on his hand the whole time.

Oh Jebbers McJebberton Bush, you are just all over the place! You were a Hispanic voter, but then you distanced yourself from that and did whiteness again, and then you and your Mexican wife, Columba, rolled out a new Latino outreach where you did tradesies with who speaks English and who presses "2" for Spanish. Once Jeb got the Hispanic vote COMPLETELY sewn up, he declared that multicultural societies suck ass, especially if they're full of Chinese Indian anchor babies, and now it's time to move on to The Blacks. And Jeb knows how to get votes from The Blacks, and it is by trading in white Republican welfare stereotypes about how black people only vote for Democrats because they are stupid and want welfare. Yep, Jeb, this will TOTALLY work.

"Look around this room," a man told Bush, who spoke to a mostly white crowd. "How many black faces do you see? How are you going to include them and get them to vote for you?" asked the man, who was white.

Bush pointed to his record on school choice and said that if Republicans could double their share of the black vote, they would win the swing states of Ohio and Virginia.

"Our message is one of hope and aspiration," he said at the East Cooper Republican Women’s Club annual Shrimp Dinner. "It isn't one of division and get in line and we'll take care of you with free stuff. Our message is one that is uplifting -- that says you can achieve earned success."

HAHA, GODDAMMIT JEB BUSH IS SO BAD AT RUNNING FOR PRESIDENT. See, black voters don't like that "no free stuff" talk, not because they are moochers who all want free things, but because it's fucking offensive to suggest that black people are all moochers who want free things, especially when you consider that there are FAR more white people on welfare than black people. Amazingly enough, food stamp usage is really high in Republican districts! Now, those white Republicans don't THINK they get free stuff from the government like black people do, which is why they're always telling the government to get out of their Medicare. This is because they are very stupid and should GET A BRAIN, MORAN.

And know who ELSE said the whole "free stuff" thing? That's right! It is President Mitt Romney, who would have won that election if Barack Obama hadn't beaten his Mormon magic underpants ass, and also if he hadn't sucked at running for president almost as much as Jeb Bush sucks at it. Of course, Romney thinks he lost because Obama gave black people presents, and probably drugs or something:

Saying that he and his team still felt “troubled” by his loss to President Obama, Mitt Romney on Wednesday attributed his defeat in part to what he called big policy “gifts” that the president had bestowed on loyal Democratic constituencies, including young voters, African-Americans and Hispanics.

In a conference call with fund-raisers and donors to his campaign, Mr. Romney said Wednesday afternoon that the president had followed the “old playbook” of using targeted initiatives to woo specific interest groups — “especially the African-American community, the Hispanic community and young people.”

And Jeb will probably blame his loss on that too, once he's worked really hard explaining to black voters how he's going to do "hope and aspiration" to them, but no fucking handouts, you gross moochers. And black voters will, yet again, look at Republicans and say, "Goddammit, these are racist fucks," and they will vote for Hillary or Bernie or Lawrence Lessig or Orly Taitz or Kim Davis or whatever other hooligan the Democrats eventually end up nominating.

Of course, it won't be a direct loss for Jeb. He'd have to win the Republican nomination for that to happen, and LOL.