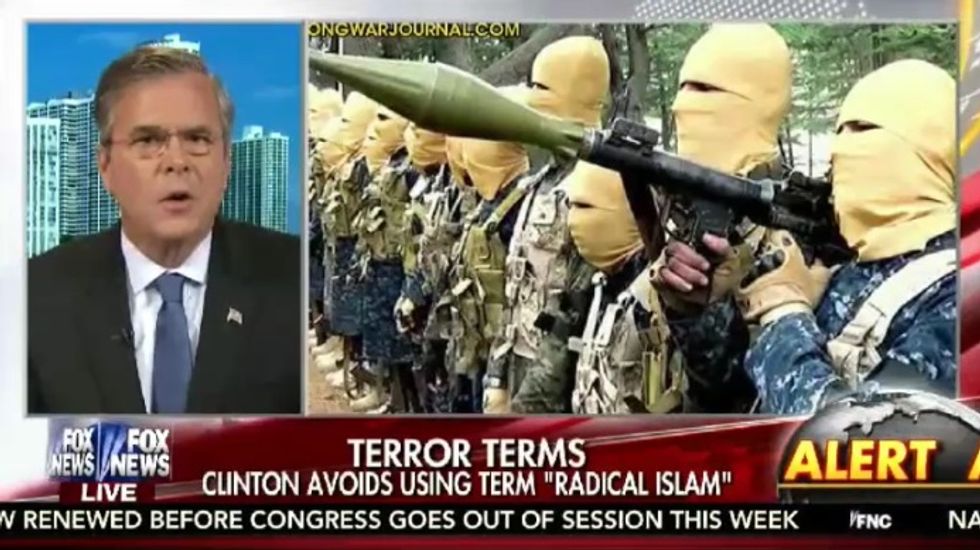 Sure, Jeb looks dumb. But look at that one short little terrorist!

Jeb Bush keeps pushing his strange attempt to out-Christian the other Republican candidates, explaining on "Fox & Friends" Monday how Islam is the only religion that breeds radicals anywhere on Earth, so failing to use the magic words "Radical Islam" somehow makes fighting ISIS impossible. Bush was critiquing both President Obama's speech on terrorism and Hillary Clinton's comments Sunday, "there are radicals, people who believe all kinds of things in every religion in the world." Bush's "no Christian radicals" comments start around the 4-minute mark in the embedded video, in case you wish to limit your exposure to the Derp Effects of watching a "Fox & Friends":

Jeb! wasn't having any of that "everybody does it" nonsense, as Fox helpfully showed scary photos of ISIS dudes looking like Muslim Ninjas wearing suicide vests and carrying rocket propelled grenade launchers:

Look, we are at war. They're at war with us, so by definition we're at war, and the fact that a Caliphate the size of Indiana exists is where they get their energy. Every day that that exists, they can declare victory to recruit people. If we destroyed ISIS in the form of a Caliphate they would be weakened across the world, we would be living in a much safer place.

The idea that somehow there are radical elements in every religion is ridiculous. There are no radical Christians that are organizing to destroy western civilization. There are no radical Buddhists that are doing this. This is radical Islamic terrorism. It is not showing disrespect to the religion of Islam to be clear about this. The simple fact is by not recognizing it, you end up creating strategies that are tepid and weak.

[contextly_sidebar id="vv9yAlMOR5NGBZrBUt30B4NNikOurqLR"]No radical Christians, huh? What about that one guy who killed three people at the Colorado Springs Planned Parenthood because, according to people who've had the misfortune of knowing him, he believed people who killed abortion providers were "doing God's work"? Aw, but he's only an outlier. It's not like there's any organized group advocating murder for Jesus's sake, unless maybe you count the Colorado Springs killer's "heroes," the Army of God. They even have a website praising Scott Roeder as an "American Hero" for murdering Dr. George Tiller. And they have called for the murder -- on behalf of God, of course -- of any other abortion providers who try to do their job in Kansas.

Silly us, though. Such fanatics and their lunatic supporters represent only a tiny, violent minority of Christians, who are law-abiding followers of a religion of peace. Besides, the Planned Parenthood shootings were so long ago, back in November, before Everything Changed with the attack in San Bernardino. We can see why it might have slipped Jeb's mind.

We also think it's pretty nifty how Jeb plays so easily into ISIS's own propaganda, exactly what Hillary Clinton warned against. They don't really have a "Caliphate," they're a bunch of armed thugs who have overrun some territory, but calling it a "Caliphate" means you think they're right. As Clinton said, we don't want to validate those delusional nutballs because:

It helps to create this clash of civilizations that is actually a recruiting tool for ISIS and other radical jihadists who use this as a way of saying "We're in a war against the West. You must join us. If you are a Muslim, you must join us." No. If you're a law-abiding, peace-loving Muslim, you need to be with us against those who are distorting Islam.

You know, kind of like how people who murder clinic workers aren't really good Christians?

[contextly_sidebar id="jSkJSw2YeGEMUp2pNFZsYV7TM2tBuAVZ"]This is at least Jeb's third stab at trying to push Christian Supremacy. As you may recall, even before the Paris terror attacks made everyone crazy, he said we should invite all Christian refugees from Syria to come to America, and then after Paris he again got very excited about imposing religious tests for refugees. We're not sure why he thinks the Jesus schtick is such a terrific idea, since he continues to sink in the polls and is even getting mocked by Herman Cain, one of the biggest losers from last time around. What's up, Jeb? You do want this job, don't you?