Jeb! Bush Remembers That One Time His Brother Won The Iraq War 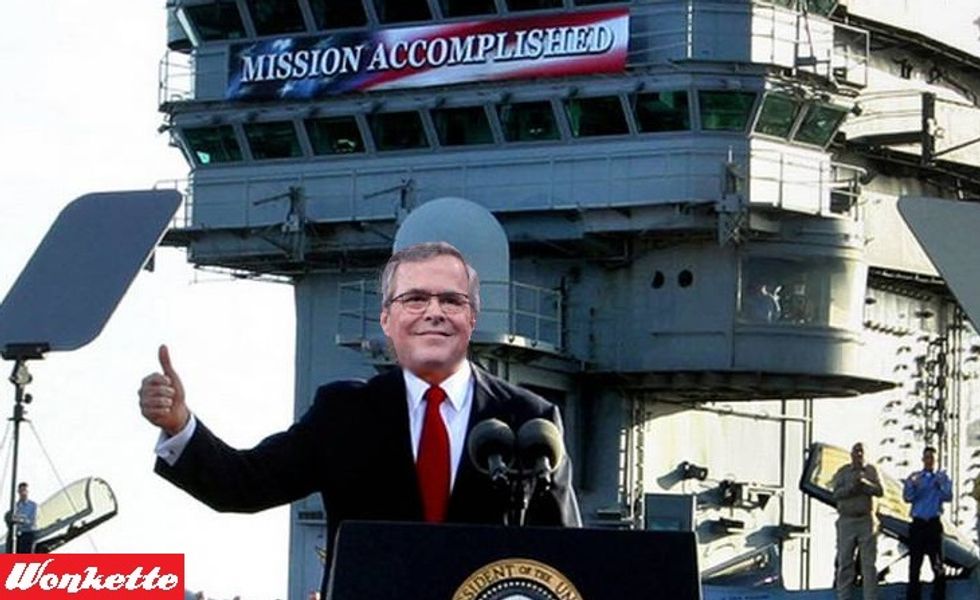 Jeb! Bush would just like you all to know what a terrific job his brother George did in Iraq. No really, you may have thought it was a quagmire with thousands of dead Americans and hundreds of thousands of dead Iraqis, plus the creation of instability that continues to this day, but now that he's given it a lot of thought and gone back and forth on it a few times, Jeb! would like you to know that his big bro was much better at war stuff than you remember!

Speaking at a national security forum in Davenport, Iowa, on Thursday, the Republican presidential candidate acknowledged that his brother's record on prosecuting the war and its aftermath wasn't perfect as he tried to balance his own outlook and reconcile the implicit connection he has to some of his brother's unpopular decisions.

“I think people have every right to be critical of decisions that were made,” the former Florida governor said. “In 2009, Iraq was fragile, but secure.”

And he even said Those Words, which we should never let him forget. It's like if Nixon had a little brother who ran for president and insisted that really, big brother Dick really wasn't a crook, because he never went to jail.

The “mission was accomplished” when it came to Iraq's security at the end of his brother's time in the White House, Bush said.

“That is a fact,” he said. “You can't rewrite history in that regard.”

That would be a pretty impressive argument if it weren't already a rewriting of history --a history of just six years ago, at that!

And then Jeb explained why all that bloodshed and money was worth it:

“Taking out Saddam Hussein turned out to be a pretty good deal,” Bush said in a reference to the execution of the Iraqi president.

Erm. Yes, thank you for returning to Dick Cheney and Donald Rumsfeld's favorite talking point from 2003 to 2009. And everything was so beautiful after Saddam Hussein was gone, and the country fell into a civil war. But at least it was no longer ruled by a dictator who oppressed the country's ethnic minorities; instead, it turned into a war of everyone against everyone, with enormous slaughters of civilians of every ethnicity. So maybe that was equality, of a kind.

Speaking of "rewriting history," Peter Beinart, over at the Atlantic, has written a fine refutation of what he calls the "Surge Fallacy," noting that, yes, parts of the surge were indeed very successful, especially paying Sunni leaders to not join with al Qaeda to fight against U.S. troops. But this year's crop of hawkish 2016 candidates has conveniently forgotten something: The surge wasn't in itself a victory.

The surge was not intended merely to reduce violence. Reducing violence was a means to a larger goal: political reconciliation. Only when Iraq’s Sunni and Shia Arabs and its Kurds all felt represented by the government would the country be safe from civil war. As a senior administration official told journalists the day Bush announced the surge, “The purpose of all this is to get the violence in Baghdad down, get control of the situation and the sectarian violence, because now, without it, the reconciliation that everybody knows in the long term is the key to getting security in the country—the reconciliation will not happen.”

But although the violence went down, the reconciliation never occurred.

Oh, that. It's far easier to blame Barack Obama for Iraq falling apart than to acknowledge that Iraq was never really together in the post-Saddam environment. Go read and bookmark Beinart's article, kids -- you'll be citing it a lot in the next few months of debates. And when you do, be ready to be accused of rewriting history, because now everyone "knows" that George Bush brought peace to Iraq, which proves that we need to go back there and bring peace again, and while we're at it, maybe invade Iran for good measure. No matter how big a clusterfuck it turns out to be, there'll no doubt be a 2020 or 2024 Republican candidate to explain why it was a huge success.