Jeb Bush Says More Dumb Stuff, And It's Not Even About Iraq This Time 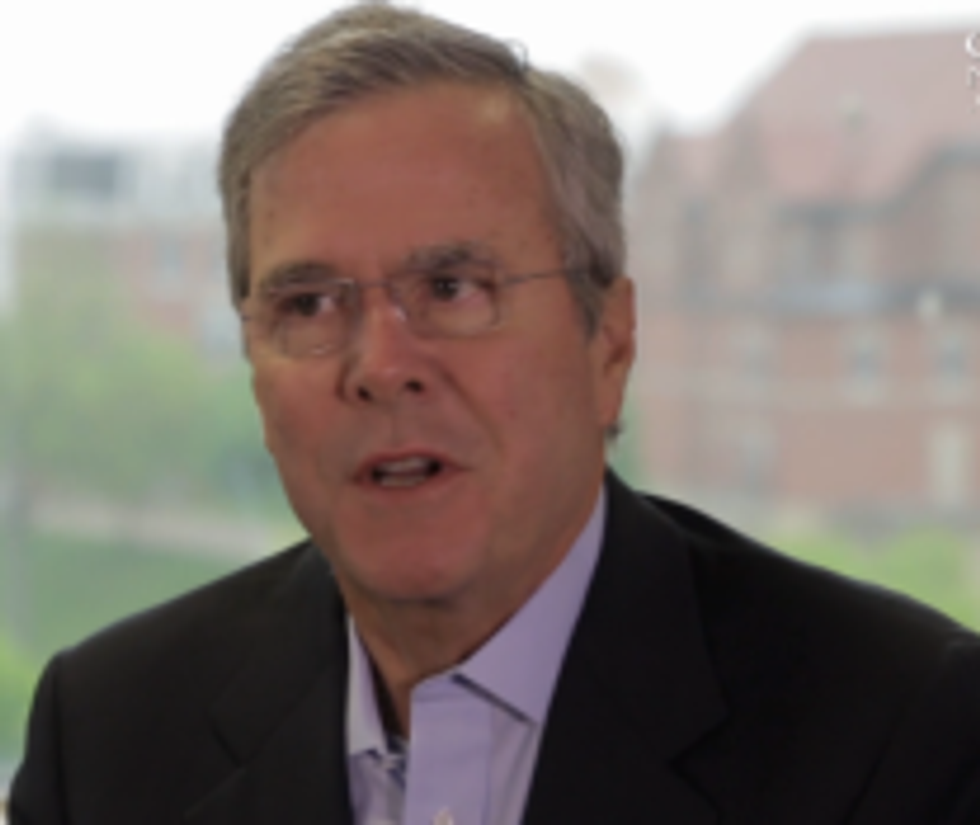 After a full week of fucking up a simple yes-or-no question about invading Iraq, Jeb Bush dropped a fresh fail-flavored dookie in the punchbowl this weekend, during an interview on the Christian Broadcasting Network:

A big country, a tolerant country, ought to be able to figure out the difference between discriminating against someone because of their sexual orientation and not forcing someone to participate in a wedding that they find goes against their moral beliefs. We should be able to figure this out. This should not be this complicated, but gosh, it is right now.

Gosh! Also golly gee. This discrimination stuff sure is unnecessarily complicated, even though it is real simple for Jeb Bush, in his brain, where he gets the words "now" and "then" all confused. Exercising one's religion takes a lot of space (it's basic biblical geometry), especially if it requires you to discriminate against other people, but we're a big country, darn it, we should be able to find room for that, maybe in Alaska? It's roomy.

They need the space to act on their conscience. That is what faith is about. The best of our faith -- anybody of faith, Christian, Jewish, all faiths -- is when people act on their core beliefs in a way to help others or to protect the vulnerable or to do whatever they think is right, based on their faith. And now that is being attacked. [...]

People ought to be able to express their faith, but also act on it in the public square.

And for some people, who are terrible and awful, their core belief is being a dick to gay people, which is a terrible core belief to have, and if that's the central tenet of your faith, your faith sucks. But freedom! blah blah barf, which is why Jeb is "absolutely" OK with business owners refusing to serve gay couples "if it's based on a religious belief." And the best example he can think of is none other than awful terrible person Barronelle Stutzman, the Washington florist who violated state law because of her "relationship with Jesus." Poor Ms. Stutzman might be forced out of business, according to Jeb, just because people are intolerant about her intolerance (and also, THE LAW), even though she has managed to collect plenty of cash from sympathetic gay-haters, including that Indiana family who owns the No Homo pizzeria, and is now hiding in the attic, just like Anne Frank, except they collected almost a million bucks, unlike Anne Frank, and no one is trying to genocide them.

That's the sort of no-reason-to-be-complicated situation, gosh, where we should be more tolerant and just leave that poor florist alone so she can act on her core beliefs by discriminating against gay couples. See? It's easy if you don't make it so difficult. And let's not forget, this is coming from the gay-friendly Republican in the 2016 race, because Jeb hired a gay one time, so even though he supports the right to discriminate against people because you don't like the kind of sex they do to each other in the privacy of their own bedrooms, he's not as bad as all those other assholes in the race who believe the exact same thing and think "freedom" means allowing people to break the law as long as they click their heels and say "Jesus."