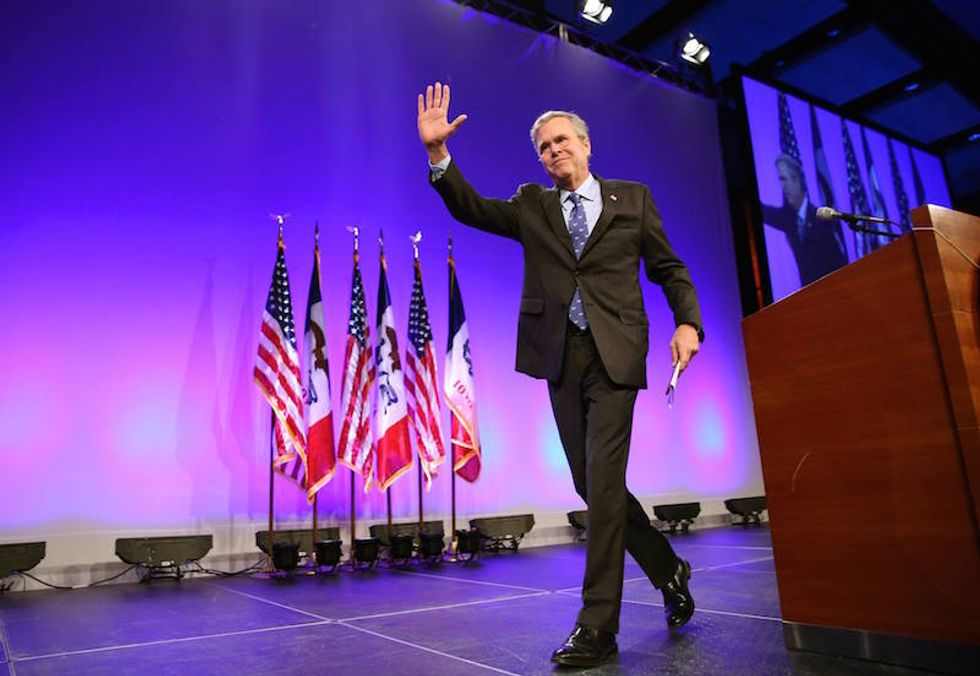 Is it a day? It is! So you know what it's time for? (No, not that, put your lady boners and boy muffs away, that's for after the kids are in bed. This is a FAMILY BLOG.)

It is time o'clock for us to snicker and point and laugh and take cheap shots at Jeb Bush, for sucking. How is Jeb sucking today? Same way he sucked yesterday, and the day before that. With his own words, what have come back to chomp on his dumb ass:

Jeb Bush insisted during his unsuccessful first run for the Florida governor's office that an alternative to welfare for women is to "find a husband."

The Republican 2016 presidential contender's comments came in the heat of a 1994 campaign that has come back to haunt him -- particularly as he seeks to run an inclusive campaign aimed at broadening the GOP's appeal. [...]

"If people are mentally and physically able to work, they should be able to do so within a two-year period. They should be able to get their life together and find a husband, find a job, find other alternatives in terms of private charity or a combination of all three," Bush said.

Telling women to get themselves a Big Strong Man to husband them up and take care of their problems is a favored talking point among conservatives, especially the ones with money, because they know how to not be poor. (Tip: It helps if you are born into a rich family, like, say, the Bush kind.) Kicking low-income women for not having more money is also nothing new. Remember that time Mitt Romney ran for president and lost -- sorry, we mean the second time he did that, gotta be clear -- and he was like, "You lady poors need to get a real job, like my wife, so you won't be a drain on my hard-earned moneys, that I got from my dad"? Because staying at home with The Children, for The Children, is for white suburban ladies who got A Real Man to put a ring on it. Like his wife, Ann, who has never worked a day in her life, except for how she's a working mom just like YOU PEOPLE, and yeah, fuck them both, right in their stock portfolio.

We were sternly lectured earlier this week by Jeb's campaign that it is mean and unfair and "cheap shots" to quote his own words, from his own book, about how one way to fix all the everythings is if we could publicly shame unwed mothers again, like in old-timey days. Sigh. But then Jeb was all, "I have evolved! Even though I still think the same exact thing, but please stop criticizing me for it!" So we expect to get a talking-to by his campaign, followed by some awkward Jebsplaining from his own dumb mouth, about how American women can do whatever marrying or not-marrying they want as long as it's not the clam-on-clam kind, ain't freedom great? Even though this is exactly the sort of thing that makes the Republican base hard, in their nasty bits, but those guys hate Jeb already, so if he doubles down, it probably won't help, and if tries to "evolve," it definitely won't help. Screwed either way, hooray!

Here is A Idea. Since Jeb Bush ain't never gonna be president, no way no how, but he is quite interested in the marital status of U.S. Americanites, perhaps he could spend his time looking for a permanent first lady for President Lindsey Graham. We hear he's a bro with no ho. And matchmaking seems like a far better career choice for Jeb than failed presidential candidate.