Jeb Bush Unveils Presidential Cabinet, Everyone In It Is George W. Bush 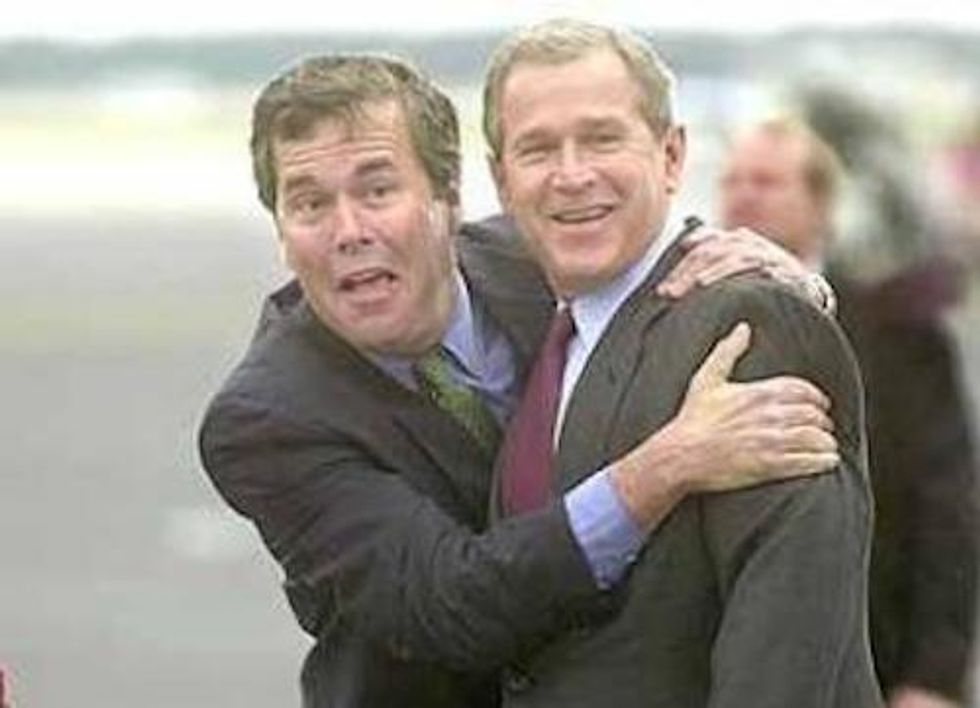 Every Republican knows the absolute last name you ever want to mention in mixed company is, um, you know. That one president who came before Barack Obama. Hell, even that one president knows he is toxic, which is why he has said "you won't see me" during the 2016 presidential election. Because his name is shit, his legacy is shit, his own party has distanced itself from him for years, not inviting him to conventions and insisting he was never really one of them anyway. But there's one Republican who thinks saying GEORGE W. BUSH is a winning strategy. You'll never guess who it is!

After spending months distancing himself from his family’s political legacy, Jeb Bush surprised a group of Manhattan financiers this week by naming his brother, former president George W. Bush, as his most influential counselor on U.S.-Israel policy.

“If you want to know who I listen to for advice, it’s him,” Bush said Tuesday[.]

With zero context, that probably sounds like a bad idea. How stupid do you have to be to seek George W. Bush's advice on how to tie your shoes, let alone foreign policy? But wait -- it's even worse than that.

The remark came as part of an answer to a question about Bush’s political aides and their policy views, and whether he relies on the guidance of former secretary of state James Baker, guests said.

See, because Jeb Bush has already stomped all over his own dick by hiring dad's pal James Baker -- notorious for, among other things, not being very nice to Israel -- he's making it all better now, assuring Jewish Republicans he does TOO heart Israel, because he's letting his drooling mouth-breather brother mumble in his ear to make nice with Sheldon Adelson and The Jews who remember Papa Bush's presidency, and Baker's time as secretary of state, before #StandWithIsrael was so hip among conservatives.

Jeb Bush has surrounded himself with many of his brother’s advisers and has endorsed many foreign-policy positions that mirror those of the former president.

It's a great strategy, hiring all the people even Republicans blame for creating an international clusterfuck by being so bloody awful at foreign policy. Who wouldn't want more of that? Hell, why doesn't Jeb just announce now that he's asked Dick Cheney to decide the most qualified American to be on Jeb's ticket is none other than Dick Cheney? That would really shore up his chances.

Jeb's apparently planning to officially kick off his campaign next month, but at his current rate of fucking up left and right, you really have to ask why bother, when surely Mitt Romney is coming to save the day?