Jeb Bush Will Fix All The Things, As Soon As He Figures Out What They Are 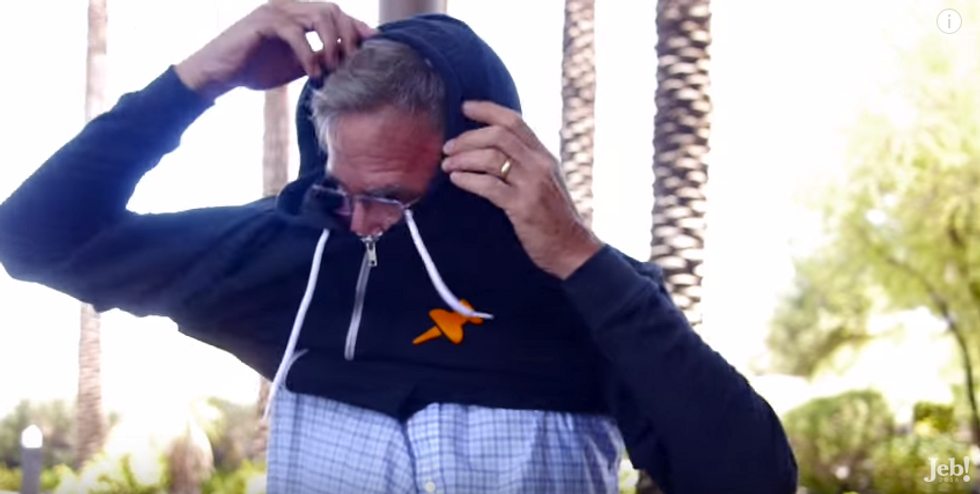 It's the beginning of a new week, which means America has a case of the Mondays, and Jeb Bush is brainstorming new ways to be a complete fuck-up. Last time we writed you words about Jeb!, we noted that we're starting to feel a teensy bit guilty about making fun of Jeb's EVERY SINGLE MOVE, as if we're kicking a particularly stupid puppy. But while yr Wonkette is decidedly not a puppy-kicker, it's our God-ordained job to kick Jeb around, so we're gonna keep doing this until he finally has the presence of mind to drop out of politics forever.

But wait, Jeb says! Jeb can fix it! He can repair his terrible campaign, and make it so Republican primary voters, who seem to have coalesced around any candidate whose name doesn't rhyme with Deb Mush, actually want to support him! He'll find a way to get more than four measly Iowans to love him! There have gotta be at least two or three more people out there who'd piss on him if he were on fire, right?

And thus we have Jeb's new "reboot" or whatever, which is for real called "Jeb Can Fix It." Look, here is a banner!

That is just a really good banner, don't you think? So presidential! And what kinds of things will Jeb be fixing?

“This election is not about a set of personalities — it’s about a set of principles,” Bush plans to say during a speech Monday in Tampa, Fla., according to excerpts released by his campaign. [...]

The tour is dubbed “Jeb Can Fix It,” and Bush is expected to argue that he can bring his Florida experience to Washington, D.C., when it comes to items like tax cuts and deregulation. In the excerpts, Bush describes Florida as “a big, diverse state, shaped by conservative, results-oriented leadership,” according to the excerpt.

Tax cuts? Deregulation? That sounds thrilling and totally fucking new, like OMG have we ever heard things like that from a Republican before? Maybe this is his strategy to finally win the endorsements of George H.W. "Daddy" Bush and George W. "Big Dumbass Brother" Bush, who don't seem to have made up their minds yet.

And this will DEFINITELY win the vote of Barbara "Mean Mommy" Bush, the one who hates him and makes him ride in the cargo hold of the Bush family jet, according to the Official Wonkette Barbara Hates Jeb theory, which is usually correct.

Jeb spoke Monday to all his adoring fans (LOL) and offered the following assurances:

INSPIRING. AS. FUCK. He's not Captain America, but he's striving, and also can fix it. Watch out, all the other candidates, Jeb's "striving" to nip at your heels!

Other things Jeb! needs to fix, we guess:

We're sure this reboot/reorganization/whatever the fuck it is will be change everything. Absolutely. For sure. You betcha. Go Jeb! It's your birthday!