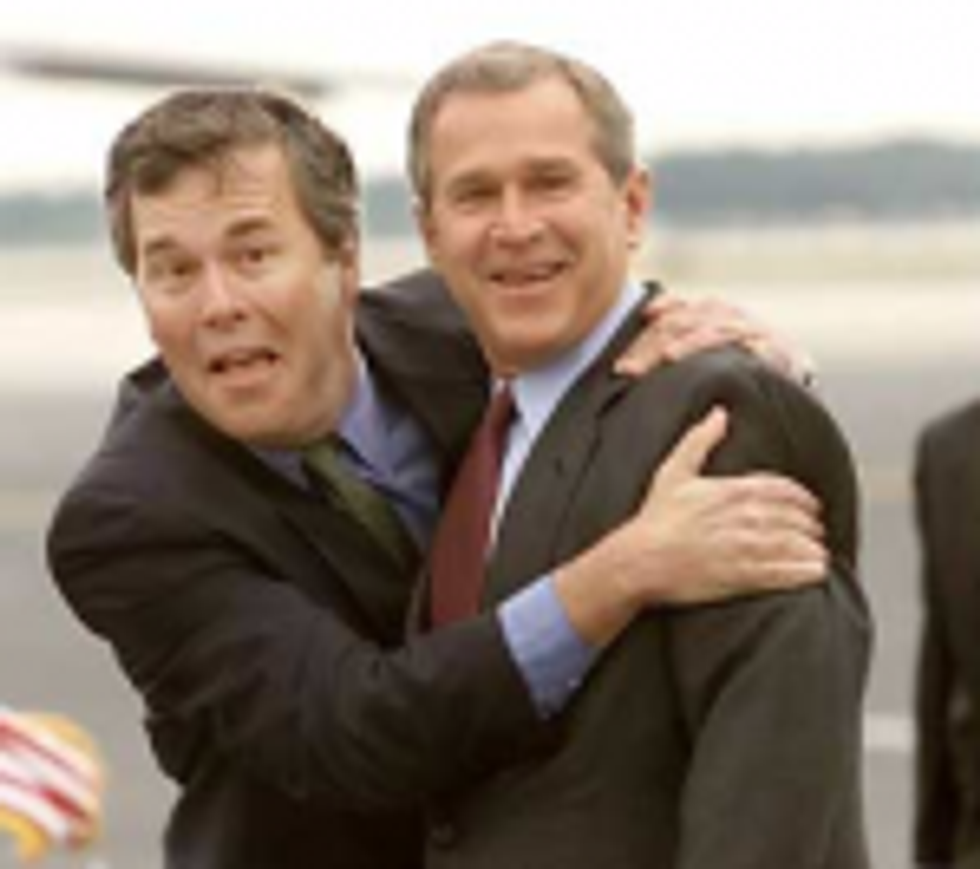 West Palm Beach, Fla – Y’all ready to see if George H.W. Bush’s testes can ruin the world (again)? Former Florida Gov. Jeb Bush says he might prove it by considering a shot at the veep spot, if asked nicely by Willard. But he doesn’t think Willard likes him that way. That’s ok, because even though Jeb would consider it, he doesn’t know if it would be the right thing. That’s how themBushies think.

Jeb’s mental prowess has allowed him to answer the difficult questions only a potential commander-in-chief can fulfill. At almost light speed and spot-on precision, he told America, "I would consider it” then, shortly after, “I am not going to be the veep nominee. Lay that to rest.” Then, he laid it all out for America when he ended the day with, “I guess I wasn’t clear enough.”

The Bush family knows a thing or two about thug life. Jeb is just one member of the Bush Brigade and has already shown Florida what a gangster governor can do. Jeb has always been the smart one, Dubya the special one and Neil the scud. There are other Bushies out there, but they’re busy doing other things.

Strategery runs deep in the Bush family and Jeb used his Floridian Geriatric Mindlock by endorsing other people for the role. He touted the qualifications of U.S. Sen. Marco Rubio of Florida for the second spot on the ticket. A Romnubio duo would play out rather well in Jeb's mind, but that won't stop Jeb from competing against him if he is asked to be considered as veep. Also being empowered with Floridian Geriatric Mindlock superpowers, Rubio fired back with his own statement.

"If in four, five, six, seven years from now, if I do a good job as vice president — I’m sorry, as senator — I’ll have the chance to do all sorts of things.”

Jeb is playing it smart and alluding to being interested in the veep seat while also making comments about not being interested in the veep seat. Willard uses a very similar strategy and the two may a formidable dynamic duo that will lead America into a new era of ‘uhhhh’. Jeb’s poker face is leaving this whole thing a mystery for now, but Twitter has captured a wealth of information leading to a definitive answer of ‘Yes he is not going to be interested in saying no.’

The Spanish translation of his recent dialogue with America can be read in next month’s article of ‘¿Qué dijo él?’ Magazine. [HuffPo]