Jeff Sessions: 'Aren't I A Good Boy For Recusing Myself? LOOK WHAT A GOOD BOY I AM!' Your Open Thread! 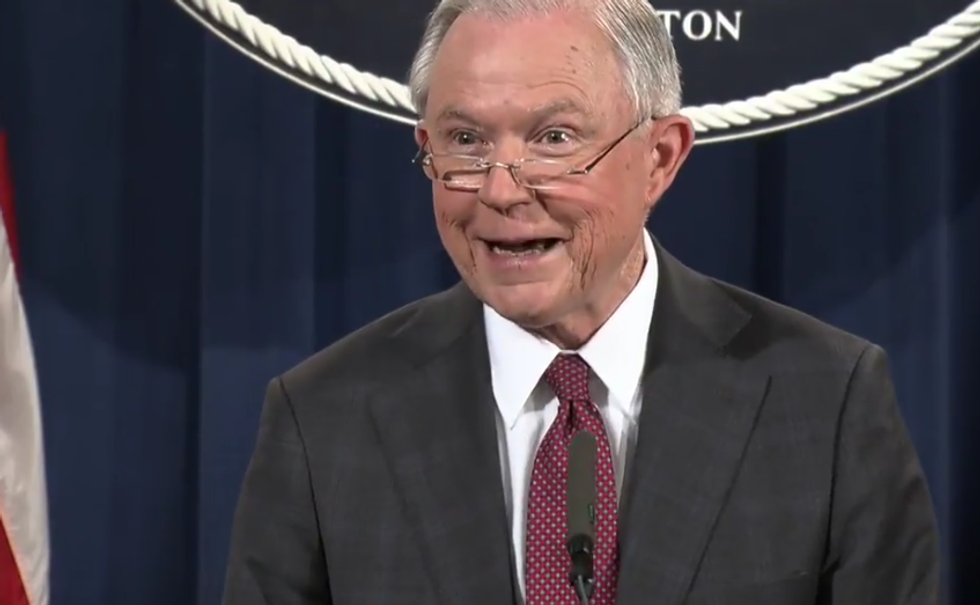 Welp, that was fascinating. Attorney General Jeff Sessions did a short presser Thursday afternoon and announced he was recusing himself from any investigation of the Trump Russia scandal or the Trump campaign, because he's read the rules, and he's a good boy who follows the rules, now can we talk about something else, like his walk with Jesus?

Acting Deputy Attorney General Dana Boente, an Obama appointee, now has the authority over those investigations, at least until Sessions's Trump-appointed pal Rod Rosenstein is confirmed as Deputy AG instead, and that doesn't start until next week so HIIIIIIII, DANA BOENTE, HIIIIIIII, if you'd like to appoint a special prosecutor, that would be pretty neat!

Here are two journalist tweets, to tell y'all just how much the Sessions presser resolved things:

Describing his September 8, 2016, meeting with Russian ambassador Sergey Kislyak, Sessions said he told him he went to Russia with his church group, and that even though Kislyak is not washed in the blood of the Lord, he was glad the Jesus people came to visit Russia. Also, they talked about terrorism and Ukraine and boy howdy, he doesn't even know. Jesus trip --> Terrorism --> Ukraine. GOT IT. He also said ambassadors are "gossipy."

Oh, and here is a weird lie, from his prepared remarks:

... [T]he idea that I was part of a 'continuing exchange of information during the campaign between Trump surrogates and intermediaries of the Russian government' are totally false. That's the question that Sen. Franken asked me during the committee hearing.

Nah, nuh uh, nope, try again! Franken didn't even suggest Sessions had been part of the "constant contact." Look at the transcript of Franken's question:

...[I]f it's true, it's obviously extremely serious and if there is any evidence that anyone affiliated with the Trump campaign communicated with the Russian government in the course of this campaign, what will you do?

Sessions pushed back against the same notion later in the presser, that he had "constant contact" with the Russians during the campaign, which is great, because literally NOBODY ACCUSED HIM OF THAT. To be clear, the big news story today is that Sessions had TWO MEETINGS with the Russian ambassador. When Sen. Franken asked during his confirmation hearing about the "constant contact" story -- a different story, which came out weeks ago -- he was asking about what Sessions would DO as attorney general if he found information that confirmed "constant" contact between the Trump campaign and the Russians.

To sum up, Sessions denied constantly having sex with those Russians in response to Franken's question, and he denied the same thing twice in his presser today. Wethinks Jeff Sessions protesteth too much!

This is your open thread, so we're taking bets on when Jeff Sessions will resign, because this story is not going away. Rebecca says April 19. We're going to go for April 7, because that would be a nice present for our birthday weekend. Or will he just come back to work Monday and decide fuck it, he's going to give up being attorney general for Lent, and also for the rest of his natural life? WE JUST DON'T KNOW!

Wildly speculate in the comments, what are not allowed.

Know what IS allowed? Supporting Wonkette, with yr dollars!