Jeff Sessions: What We Have Here Is A Failure To Communicate! 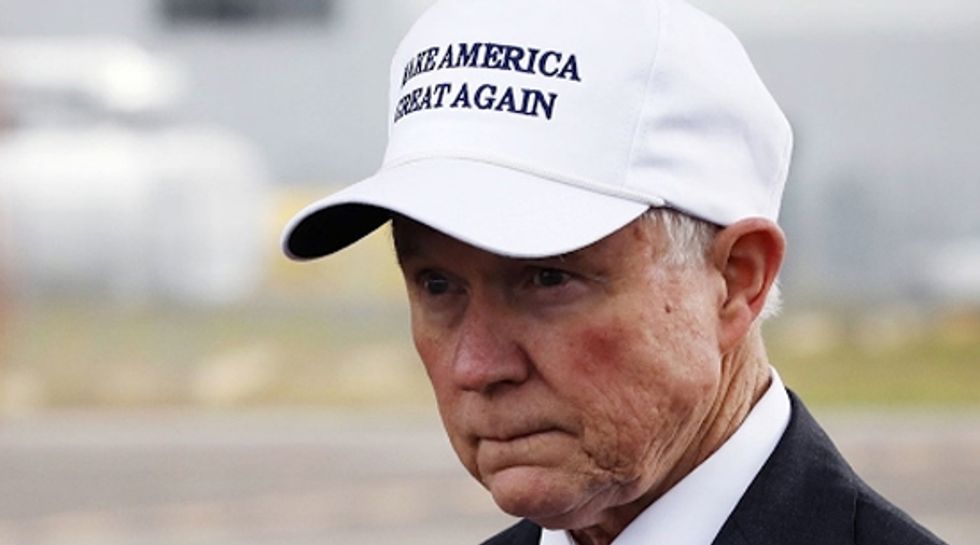 He always looks like he's just thinking 'yup-yup yo, yup-yup yo...'

Now that he's made clear the Justice Department is so over voting rights, since racism is a thing of the past, Attorney General Jefferson Beauregard Sessions III has focused firmly on the need to Git Tuff on crime, especially by unleashing our brave police to keep us safe. In a speech to the National Association of Attorneys General Tuesday, Sessions made clear that under his guidance, the Department of Justice isn't about to waste too much time dealing with police abuses, because lawsuits aimed at making police departments respect people's civil rights make cops sad and unable to keep us safe by cracking down on crimers.

"Somehow, someway, we've undermined respect for police and made -- often times -- their job more difficult,'' Sessions said. "We need to help police officers get better rather than reduce their effectiveness, and I'm afraid we've done some of that. So, we're going to pull back a little on this. I don't think that it's wrong or mean or insensitive to civil rights or human rights. I think it's out of concern to make the lives of those, especially in poorer communities and minority communities, live a safer, happier life."

The idea here is that strict policing will reduce crime and then they'll all feel a lot safer, at least when people aren't in fear of the cops, which should also keep their violent tendencies under control. It's a win-win for public safety, as long as you don't mind a little trampling on individual rights, which are sacred and inviolable when you're talking about white gun owners in Texas, but a hindrance to public safety when you're talking about black people in Chicago or Baltimore.

Sessions acknowledged that crime rates are in fact lower than in previous decades, but the official tone of the Trump administration is Gotham-City Black, so Sessions added that fears of violent crime are "driving a sense that we’re in danger" all the same. Of course, it's the Trump administration that's driving that perception with its depictions of cities as dens of constant murder, but that just proves we need to be nicer to cops.

“One of the big things out there that’s, I think, causing trouble and where you see the greatest increase in violence and murders in cities is somehow, some way, we undermine the respect for our police and made, oftentimes, their job more difficult,” he said.

Sessions readily acknowledged Monday that he hadn't actually read two major DOJ reports on police abuses in Chicago and in Ferguson, Missouri, which both found systemic problems with the police departments' treatment of citizens. But he said he had read summaries, and as far as he's concerned, there was no real reason to take the reports too seriously, since "Some of it was pretty anecdotal and not so scientifically based," a conclusion he might have a hard time supporting based on a summary. As Mother Jones points out, the Ferguson report was far from anecdotal, relying on the city's own records in most cases, and finding that

African Americans accounted for 93 percent of arrests made by Ferguson police despite being just 67 percent of the city's population; that black residents were more than twice as likely to have their cars searched during traffic stops despite being more than 25 percent less likely to be caught with contraband than white drivers; and that some discretionary citations like "walking in roadways" were issued nearly exclusively to black people.

The Chicago report also found abuses toward citizens, with these easily-dismissed anecdotal findings, as summarized by MoJo:

Those seem like details that perhaps an Attorney General probably shouldn't skim over. Not that Sessions thinks the Obama administration really knew anything about Gittin' Tough on crime anyway, because as everyone named Donald Trump knows, Chicago is a hellhole where you can't walk down the street without getting shot. Sessions also said Monday his DOJ had not yet decided whether to follow through on pursuing a consent decree with the Chicago PD, a process the Obama DOJ had begun. But he did say he was "really worried” about “the surge in murders” in the city, as well as by the decline in the use of stop-and-frisk searches used in Chicago. With those very serious concerns, why would he want to read the reports on police abuses?

Don't get any hopes up that Sessions will pursue anything but more aggressive policing tactics, because he's very concerned that if cops are forced to actually follow the law, they won't be motivated to crack down on crime. In fact, even talking about citizens' constitutional rights too much may give cops a sad, and they'll grow so discouraged they won't be able to function:

“Sometimes local police departments really step up and do a great job. It’s almost disrespectful [to] them for the feds to go in and try to take it over,” Sessions said in response to a question from The Huffington Post.

Sessions also said the nation had “gotten a little overconfident” about public safety and it affected how police responded to violence.

But since the reports he didn't read were merely anecdotal, there's no need to pay much mind to their calls for changes in how policing gets done. The main thing is to make sure officers know the feds have their backs and won't be snooping around every time some criminal (or unarmed criminal-seeming person) gets shot to death by a cop.

The Attorney General is a busy man, and voting rights don't interest him nearly as much as the crime wave we're not having.

As we noted yesterday, awareness that crime has actually declined steadily since the 1980s might indeed poison Americans with a dangerous lack of fear of exploding crime rates, since crime rates aren't exploding. How on earth will the Trumpers increase the militarization of police if we aren't deathly afraid of crime, after all?

Wonkette never has a failure to communicate. Also, will eat FIFTY EGGS, for money.