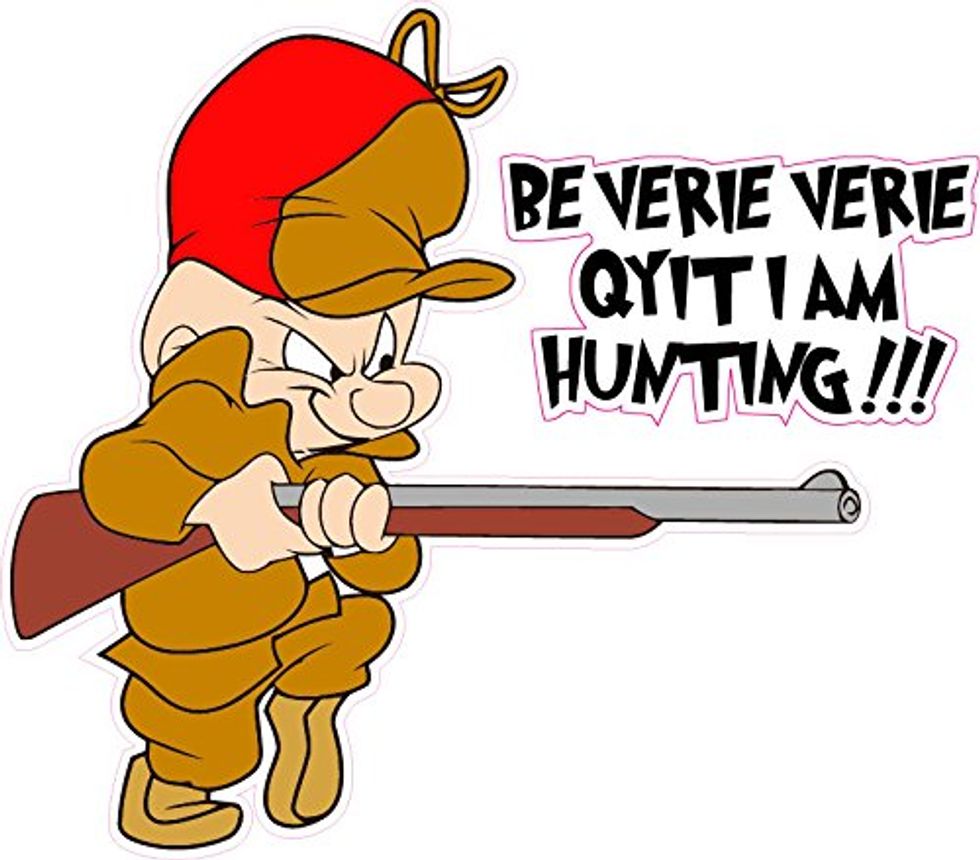 Diminutive Alabama sportsman Jeff Sessions has declared open season on those wascally leakers. Last month, after transcripts of Donald Trump's LOLSTOOPID calls with leaders of Mexico and Australia escaped into the wild, Sessions threatened to throw everyone in jail including wabbits, mongooses, pigeons, dirty skunks, government employees, and journalists.

We are taking a stand. The culture of leaking must stop.

But he never did catch that wabbit. The modern hunter needs more than a cool earflap hat and a hunting rifle whilst he's tiptoeing around the dark forests of DC. So he called up Acme Supply and got himself a new stick of dynamite.

Attorney General Jeff Sessions has told associates he wants to put the entire National Security Council staff through a lie detector test to root out leakers. It's unclear whether this will ever happen, but Sessions floated the idea to multiple people, as recently as last month.

Yesterday Axios quoted multiple unnamed sources saying that Sessions is planning to subject the members of the National Security Council to a "one-time, one-issue, polygraph test." He'll strap a heart monitor on them and shout, "Were you the varmint that told the Post that God's Anointed Leader Donald Trump lie-bragged about winning New Hampshire and all the Hispanicos? Just wait 'til I get my hands on you!"

Only now he'll have to make it a a two-issue polygraph and ask, "Were you the lowdown dirty skunk that leaked to Axios that I was planning to run this-a-here polygraph to find out who leaked to the Post?"

And when the results of the polygraph leak to the New York Times, he can add a third question about who leaked the leak about the leakers. Because if there is one thing the Sessions Justice Department has been able to hunt down and shoot, it is IRONY. Irony has been hunted to extinction when every leak investigation leaks to five news outlets within an hour.

Yes, Ol' Jeff "Fudd" Sessions cooked up a big bowl of irony fricassee when he set his sights on hunting down the liars. Since Jeff told all those lies to Congress during his confirmation hearing and had to recuse hisownself from the whole Russia investigation because of it. Does he think Poppy Trump will forgive him for being unable to kill the Russia investigation if he locks up a couple of blabbermouths? Not bloody likely!

And speaking of irony, the Attorney General might want to be careful where he points that gun while he's out hunting leakers. Not that anyone thinks Jared and Ivanka leak like sieves, perish the thought. But indicting the President's favorite baby girl and her excellent most-favored number-one husband is a lousy career move. Is that why Jeff Sessions is asking a ONE QUESTION POLYGRAPH? Is he making darn sure that he doesn't chase a rabbit and wind up catching a bear?

Wonkette is ad-free, all day long! Click here to fund us!