Jefferson Davis To Be Re-Inaugurated As President of Confederacy Tomorrow 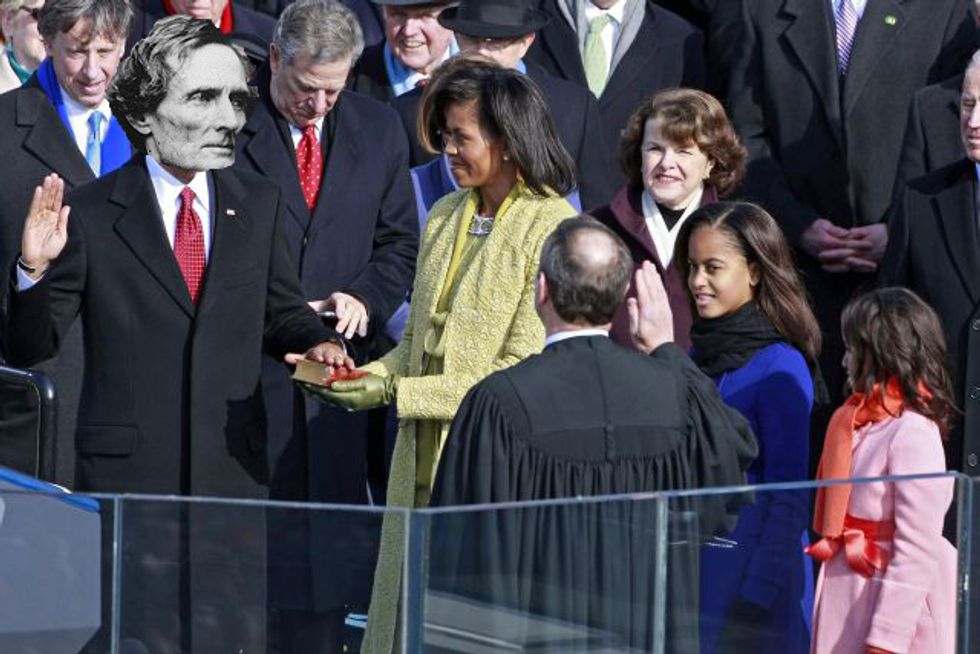 It's been over 146 years since the Confederacy ceased to exist. But it's been exactly 150 years since Jefferson Davis was inaugurated president of the thing in Alabama, and, boy, doesn't it seem like that latter one was justyesterday? Tomorrow, the Sons of Confederate Veterans (Sons? How old are they? 135?) are descending on the Alabama State Capitol in Montgomery to inaugurate a person dressed up as Jefferson Davis as the president of slavery, just like they did back then. Huzzah! It won't be hard for them, because the state of Alabama is making way for this festive event to happen, and there's even a bronze star on the steps of the Capitol where he was sworn in! Oh, and there's a "pre-inauguration" event at the Embassy Suites tonight: "Kracker Dan will provide

the entertainment for the evening as the Division welcomes everyone to Montgomery!"

There's no description of who will play Jefferson Davis, but we hope it's a Jefferson Davis furry, and we hope there's a lot of bondage. Slavery bondage.

Dress- re-enactors in uniforms in compliance with their unit's rules.

Re-enactors escorting President Davis will be in Period appropriate uniform

Those not in uniform are asked to be appropriately dressed. Any clothing

removed or the individual will not be allowed to march

"A lot of people don't keep up with history," ["Cradle of the Confederacy" guy George Gayle] said. "We are an organization that honors our ancestors because we felt they were fighting for independence," Gayle said. He hopes the younger generation "learns a little bit. All you hear about in the paper is that the Civil War is all about slavery.

Yes, keep up with history, because it turns out slavery is not a blight on the history of this country and humankind itself, it's something to be proud of and to pretend still exists, even if it's just for a few hours. [Confederate Heritage Rally via chascates/Montgomery Advertiser]