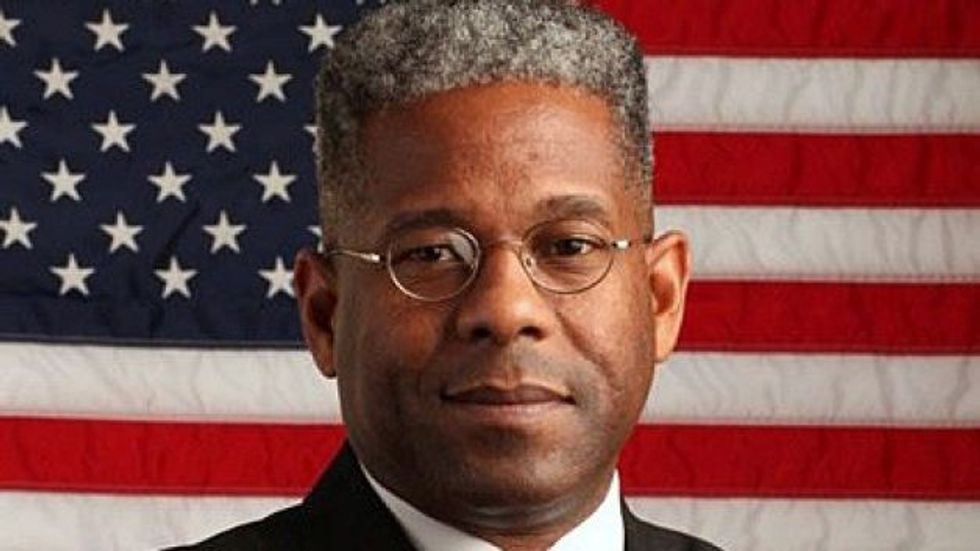 How did you spend your holiday yesterday? Did you maybe go to a barbecue? Did you go see some fireworks? Or did you spend an inordinate amount of hours doing your nails while watching "Law and Order" and avoiding the internet because whatever it's your day off and you can spend it as you like? Well, whatever you did, it seems as though you and a lot of other people plum forgot to wish Allen West a Happy Independence Day! And if you even bothered to greet him at all, you only ended up wishing him a measly Happy 4th of July, and Allen West wants you to know that this is just not good enough.

Just as we scoundrels have waged war on Christmas by refusing to wish him a Merry Christmas, and All Hallow's Day by doing evil Satanic trick-or-treating the night before, and St. Joseph's Day by really only being in it for the zeppole, and probably like, every other holiday EVER in the history of the known universe... we are now ruining Independence Day for Allen West. Because we are jerks who don't want him to have a good festive time, and also because we hate America.

Just look at the trauma this poor man has suffered!

I’ve noticed something as it relates to today and that which it represents. We’ve seen our move away from Merry Christmas to Happy Holidays, and even Happy Winter Solstice. We’ve become so damaged by the talons of political correctness that it now threatens the very existence of our Republic. And I mean its very founding.

I’ve been amazed at how people greet you with “Happy 4th of July”, as if we are celebrating a numbered date on the calendar. If this continues, there will be generations who will no longer know what happened on this day, other than we should have cookouts and shoot off fireworks.

Did you know that saying "Happy Fourth of July" was all about political correctness? Nope! Me neither! I was pretty sure it was just a thing people say! Patriotic people, even! Like George M. Cohan! And James Cagney playing George M. Cohan!

But apparently, what is patriotic enough for the composer of "You're A Grand Old Flag" and "Over There" is not patriotic enough for Allen West. Because he is pretty sure that people who say "Happy Fourth of July" don't even know what they are celebrating, and have not learned their history real good:

What concerns me is that if we continue on the path of not teaching history — and I don’t consent to the revisionist version — nor civics, what lies ahead for this day when we celebrate our American Independence?

I think by "revisionist" he means like, actually teaching children the truth about history rather than noble lies designed to make them more patriotic and therefore more willing to die for their country in a stupid war? If he is opposed to this, he should certainly be heartened by all the effort Texas school boards have made to teach children pretend history about how all the Founding Fathers were all devout Christians who were inspired by God just like Moses, and slavery wasn't actually all that bad and Phyllis Schlafly is an American Hero for helping to stop the ERA from happening. He should also be very deeply heartened by the fact that Trump supporters have no idea that the labor movement ever even happened, and are thus pretty sure that if he brings manufacturing jobs over here, they will pay living wages out of the goodness of their hearts!

You would think this would be enough for Allen West, but it is not! Because we have also failed him by not staging regular dramatic readings of the Declaration of Independence:

I wonder if Allen West has perhaps considered that perhaps there just aren't a lot of people eager to wish him a Happy Independence Day, because he is the kind of dude that will ruin your beach vacation by standing next to your sandcastle and demanding you listen to him whilst he recites the Declaration of Independence? I don't know, maybe if he didn't do that so often, he would have more friends to supply him with the holiday greetings he so desperately desires?

I also wonder if Allen West has considered the fact that some people might feel a tad awkward going "Hey! Happy Independence Day!" to a black guy. Like "Hey! Remember that time white people declared their independence and freedom from Great Britain? And then kept your relatives as slaves for the next 100 years? That sure was a good time! Not so much for you though, eh? Cause like, Britain outlawed slavery 30 years before we did, so actually that revolution worked out less well for you guys. But yay! Fireworks!"

West then went on to chat about some of his favorite Independence Day facts and also explain how Obama is King George and the IRS is pretty much the same thing as being forced to keep British soldiers in your home? Also that Obamacare is bad because it involves taxing people against their will. Which I guess is way different from when I have to pay taxes to support a war I don't believe in? Somehow? I guess?

Anyway, the moral of this story is that Allen West is kind of a nooge about holiday greetings! So the next time you want to bear good tidings to him, perhaps consider asking him first what his salutation preference is. Otherwise he's gonna have to write yet another blog about how he is sick and tired of the Left policing everyone's words and making things all politically correct and what have you.