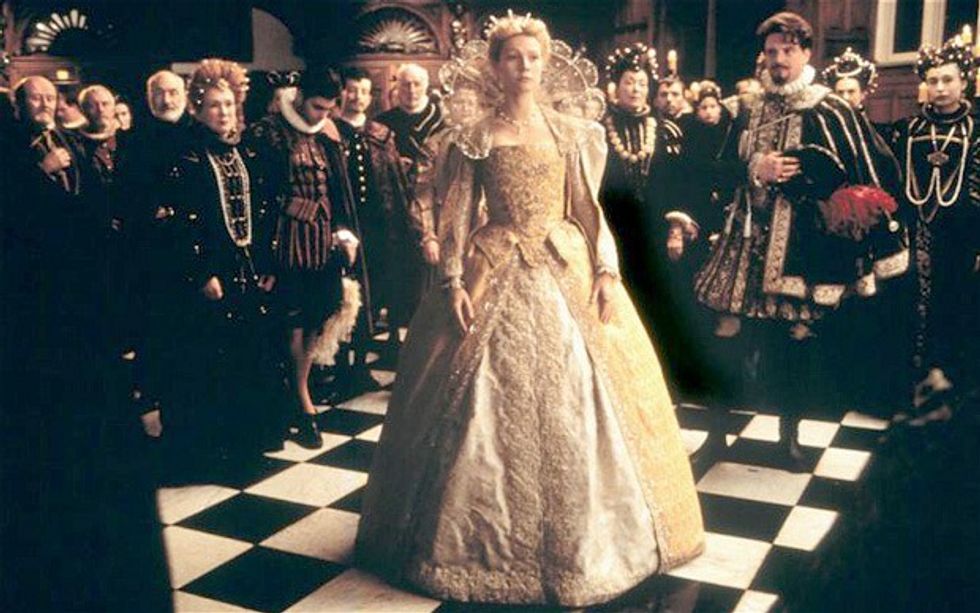 Movie star lifestyle guru Gwyneth Paltrow has taken up the SNAP challenge -- to eat only what she can afford on the $29 a week, on average, that people on food stamps receive. Did you know the Internet isVERY MAD about this? How dare this privileged princess make a mockery of hunger advocacy blah blah yortle blerp? HOW DARE YOU GWYNETH PALTROW????

A problem? Food pantries stretched to breaking point by SNAP cuts. Not a problem? Gwyneth Paltrow doing her little mite to bring attention to it, even if she doesn't buy the kind of kale you think she should buy.

First, let's reproduce some of the Tweets the Washington Post reproduces, and then yell at them.

You're soooo right, Yukio Strachan. Gwyneth Paltrow should starve to death because her mansion is not in walking distance from a grocery store. Then she should eat some meat because not all people on SNAP are vegetarian. Yukio Strachan, you are an asshole, and also ur dumb.

Jamil Smith of The New Republic, did you yell at Cory Booker when he took the SNAP challenge? If you did, by all means yell at Gwyneth Paltrow too. But while you may not need Gwyneth Paltrow being "foul" with her "poverty experiment" "to care," and I may not need it to care, and most of our respective readers may not need it to care, there are in fact a lot of people who may not have thought about these issues except when they vaguely heard their congressman sexplaining that we have to cut food stamps so no strapping young bucks will buy steak and lobster with OUR TAX DOLLARS GRRRRR.

And there's an awful lot of grocery store checkers who give mean, dirty looks to women doing their best to feed their families when they whip out their EBT cards because OUR TAX DOLLARS GRRRR. And this might make them rethink that! And next time middle-class Gwyneth-groupies hear their congressman douching out, or they're in line when a checker is acting shitty, they might push back on that. And it might even change the way they vote.

But I guess the possibility of actually making change in food policy by opening people's hearts and minds and giving them information to push back on the Louie Gohmerts of the world doesn't matter, because Gwyneth Paltrow is a blonde pretty princess who drives her car to Whole Foods to buy artisanal limes.

And here's why YOU are stupid, Chels - Queso Queen! We are not up to math today, but 1 percent of $280 million will not solve hunger (and we don't know what Gwyneth Paltrow does with her charity dollars anyway), while -- like we said above! -- getting a bunch of middle class women to rethink their attitudes on poor people and the shit they go through on the day-to-day might actually impact which assholes they vote for. Which might actually affect some policy in this country. And might actually keep some people from opening their shitholes in public to spew mouth-poo about TAKERS and TAX DOLLARS and WELFARE QUEENS.

But, you know, it's the Internet, keep being a dick.

And finally, here is Jezebel being shitty while murmuring they "appreciate" that she's "trying."

The comforting news—because I know you were worried—is that Gwyn still gets to cook her $29 food in an expensive outdoor oven, have access to the world’s best healthcare and sleep in a mansion.

(While most people complained that Paltrow's $29 haul of 7 limes and two bags of beans, give or take, are the kind only privileged princesses buy at Whole Foods, Jezebel took the opposite tack of bitching that you can't possibly get all those groceries for just $29 at any store in New York City. EVERYONE ATTACK PRIVILEGED JEZEBEL WHAT DON'T KNOW WHAT A BODEGA IS!)