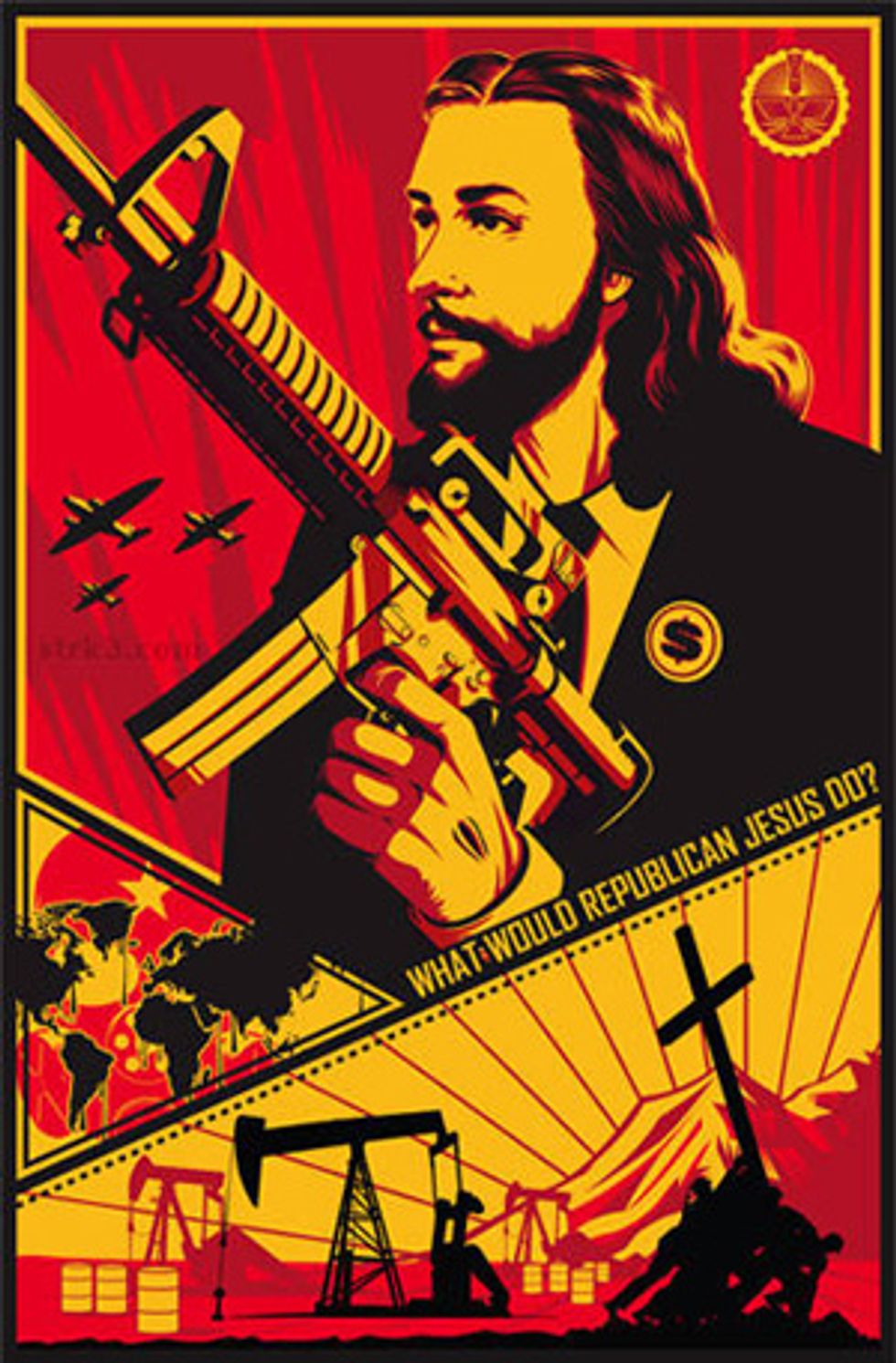 Time for another visit to the headspace of retired Army general and Family Research Council loony Jerry Boykin, who likes him a big beefyManly Jesus with big muscles and man stank, and his newest foray into eschatology is just as creative. You see, Jesus is not some wimpy peacenik commie like the comsymp libs might want you to believe. Hell no. Jesus is getting ready to return to earth with an AR-15 so he can lay down some glorious .223 caliber slaughter of the unrighteous -- and to hell with the ATF, he's enabled full automatic fire.

In a talk to a conference held last fall -- and posted to the web this week -- by fellow creative reader David Barton's Wall Builders, Boykin did some Biblical exegesis, a word which here means "writing fanfiction about Jesus and guns":

The Lord is a warrior and in Revelation 19 is says when he comes back, he's coming back as what? A warrior. A might warrior leading a mighty army, riding a white horse with a blood-stained white robe ... I believe that blood on that robe is the blood of his enemies 'cause he's coming back as a warrior carrying a sword.

And I believe now -- I've checked this out -- I believe that sword he'll be carrying when he comes back is an AR-15.

Really, this only makes sense, because Jesus would never use a heathen Kalashnikov. And don't ask smartass questions like "why wouldn't He just carry a M134 Minigun in each mighty hand?" because Jerry Boykin is being serious here, people, and he's checked this out.

Now, Jerry Boykin is also fond of another very macho document that Jesus wrote called the U.S. Constitution, and Boykin has some thoughts about that, too, and how it fits together seamlessly with the Bible:

Now I want you to think about this: where did the Second Amendment come from? ... From the Founding Fathers, it's in the Constitution. Well, yeah, I know that. But where did the whole concept come from? It came from Jesus when he said to his disciples 'now, if you don't have a sword, sell your cloak and buy one.'

I know, everybody says that was a metaphor. IT WAS NOT A METAPHOR! He was saying in building my kingdom, you're going to have to fight at times. You won't build my kingdom with a sword, but you're going to have to defend yourself. And that was the beginning of the Second Amendment, that's where the whole thing came from. I can't prove that historically and David [Barton] will counsel me when this is over, but I know that's where it came from.

See, the Founders knew that their sacred duty was to build God's Kingdom on earth, and they knew that God's warriors would need to be armed, possibly against tyrants in their own government who they would have to overthrow to water the Tree of Liberty, so that's why they said everybody should have a swordgun. This really just brings the two texts together in some really important ways, and just emphasizes how much the Bible, which never mentions voting, was the foundation for the Constitution, which never mentions the Bible. To sum up, we leave you with this exhortation from General Boykin:

And the sword today is an AR-15, so if you don't have one, go get one. You're supposed to have one. It's biblical.

Second Coming, Second Amendment -- it all fits together. And that, children, is how you interpret the Bible.