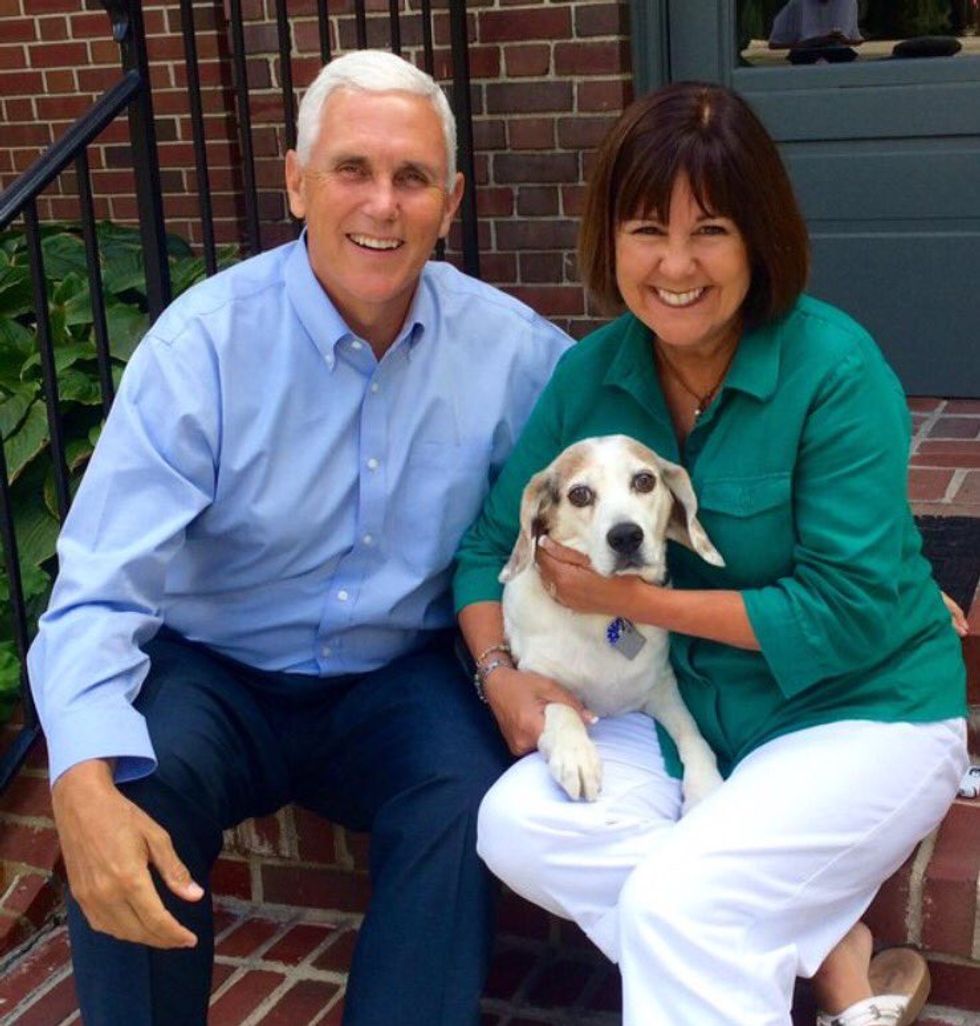 Oh, aren't we glad Jezebel survived, even though Gawker bit the dust? Ayup, you bet, we surely enough are, yeah buddy. Wonder what they're writing about these days:

THE FUCK? Two weeks out from the election, and this is news for us to make fun of? Look, we can't stand Mike Pence, as we have explained thoroughly. He's an asshole governor who wouldn't pardon an actually innocent man. He's one of the most viciously anti-choice and anti-woman politicians in all of U.S. America. He fought tooth and nail for Indiana's "fuck the gays" bill, so poor put-upon conservative Christians could preserve their God-given right to discriminate against LGBT folks. Want to read an exhaustive thing about what a dick Mike Pence is? HERE, HAVE AT IT.

But it's not FUNNY that Mike Pence's dog died. Call us crazy, but we're going to assume that Pence's sweet dog Maverick didn't want to take away a woman's right to choose or deny gays and lesbians the right to scratch his belly and tell him what a good boy he was. But Jezebel thinks it's funny, we guess. Here's how their article begins:

Tragedy has befallen the Trump-Pence campaign, which was already struggling, and it comes in the form of that tiny, pup-sized grim reaper who comes for all doggies eventually.

We should note that the blog post did send "thoughts and prayers" to the Pence family, but we all know how useless those are, especially when you're pouring salt in the wound of somebody who's very sad their furry companion just died.

And we should ALSO note that Jezebel has put Wonkette in the MADDENING position of agreeing with Breitbart. Oh yes, Donald Trump's "alt-right" campaign mouthpiece managed to notice the Jezebel blog post and find enough humanity in their little racist hearts to say, "whoa, that's fucked up, dude":

Breitbart's post mostly features tweets from people on all sides of the ideological spectrum telling Jezebel what a horrible asshole it is, and that it should be goddamn ashamed of itself. Because CLEARLY. And one of the most maddening things about this is that it gives fuckers like Breitbart readers fuel for their belief that liberals really ARE the worst, that they are cruel, and that they will literally piss on your dog's grave, due to how they hate America so much.

Well, newsflash: Wonkette fucking HATES Breitbart and everything it stands for, but if a Breitbart reader's dog gets out and we see it, we are going to pull over and do everything we can to make sure it gets home safe to your house, where it can sleep on its doggie bed. Now, if we find that the doggie bed at the Breitbart person's house is covered in swastikas, we might call child protective services, but that's for the dog's own good.

Here is Pence with his wife and his puppy dog, Maverick:

We are very sorry your sweet four-legged friend died, Mike Pence. You have no business anywhere near the Naval Observatory, but we're legit sorry, and we imagine you are very sad right now. For the record, we are also very glad nobody was hurt when your airplane slid off the runway at La Guardia, doubtless because Hillary Clinton went out on the tarmac in her undercover mechanic's overalls and failed at murdering you like she fails at EVERYTHING, are we right? No we are not right because that was a #joke.

So, on behalf of dog-lovers and cat-lovers and decent people everywhere, go fuck yourself, Jezebel. Maybe your new owners at Univision will do the right thing and delete your account.